Middlesex welcomed Bishop Dr Esme Beswick, founder and president of the Joint Council of Churches for All Nations, and acclaimed photographer Neil Kenlock to the Boardroom, for a display of some of Kenlock's classic images followed by a Q&A, a fashion show and speeches. 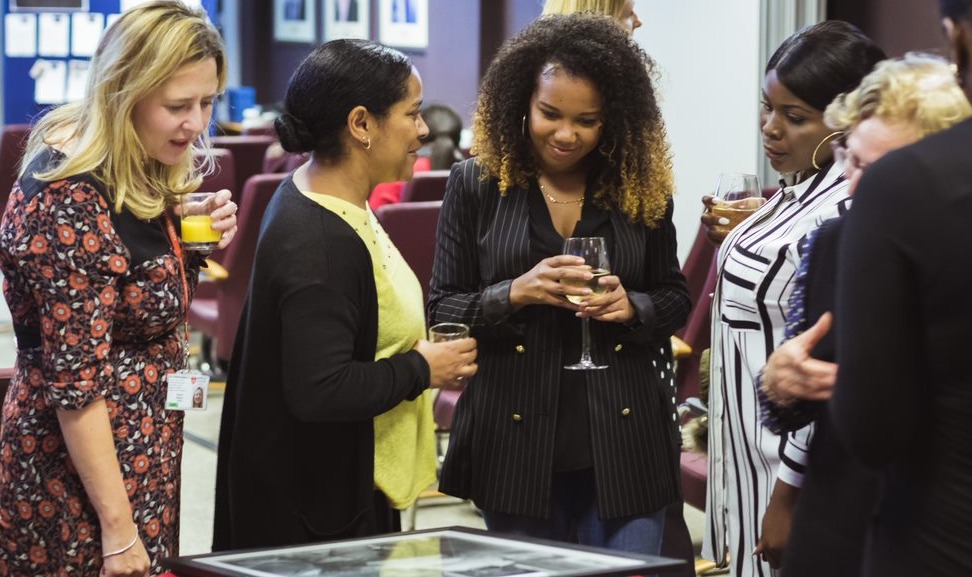 The event was to mark Black History Month, and Middlesex recently receiving a Corporate Gold/Embedded diversity Charter Mark from diversity specialists UKIED - the first UK university to do so.

Kenlock described his portraits of 1970s South London black community life and black leaders such as Olive Morris, Darcus Howe and Lord Kitts, assisted by his daughter Emelia, who graduated from Middlesex in 2002. Kenlock's work has recently been featured in an exhibition at Black Cultural Archives in Brixton, which transfers to Islington Central Library this week. A book of his photographs, which Emelia is helping produce, is due to be published next year. 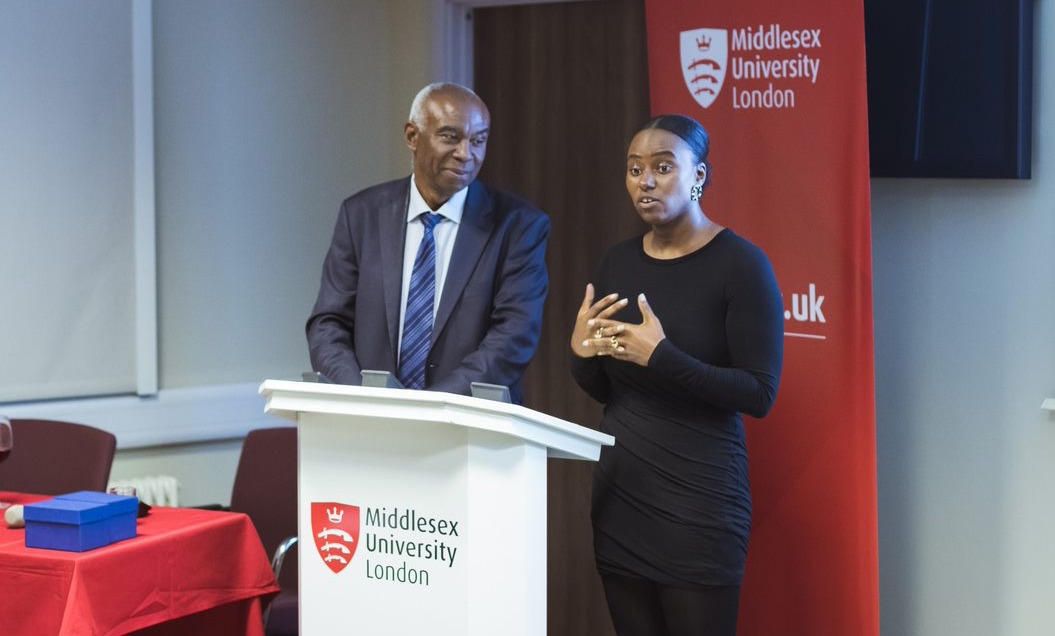 Neil Kenlock with his daughter Emilia

In a Q&A session led by Middlesex’s Diversity lead Dr Doirean Wilson, Kenlock talked about his original ambition to be a painter - until he was inspired to take up photography by David Bailey - recalled taking pictures of Muhammad Ali, and Bob Marley, and described the educational mission of the British Black Panthers, which he joined in the late 1960s, becoming their official in-house photographer. 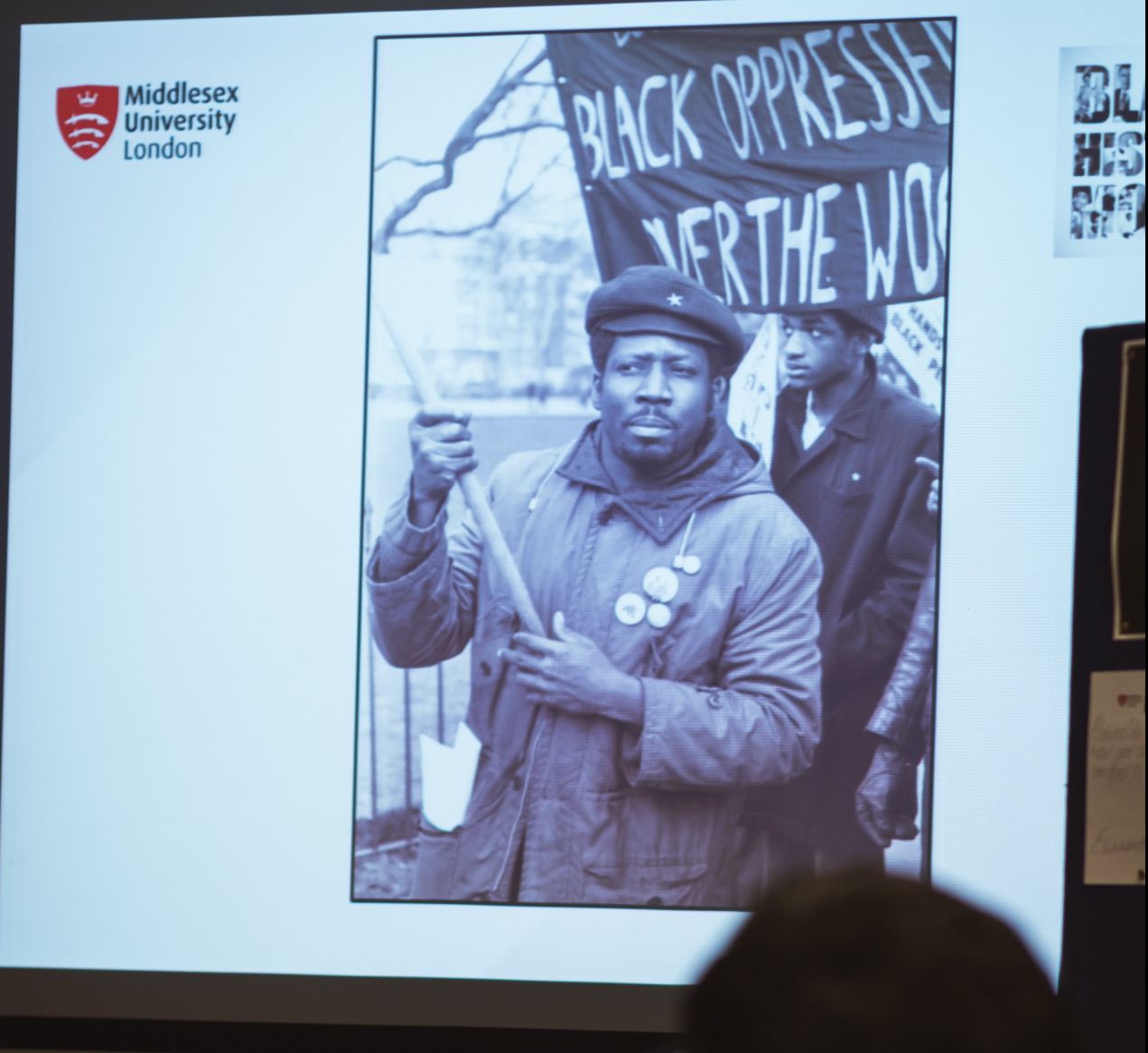 “Photography is the lifeblood, I love it” he said. “It tells the truth. And it opens doors. I don’t see it as a job, I see it as documenting things for history”. Asked what he would do differently if he had his chance again, he joked that maybe he would write down the date on his photographs. 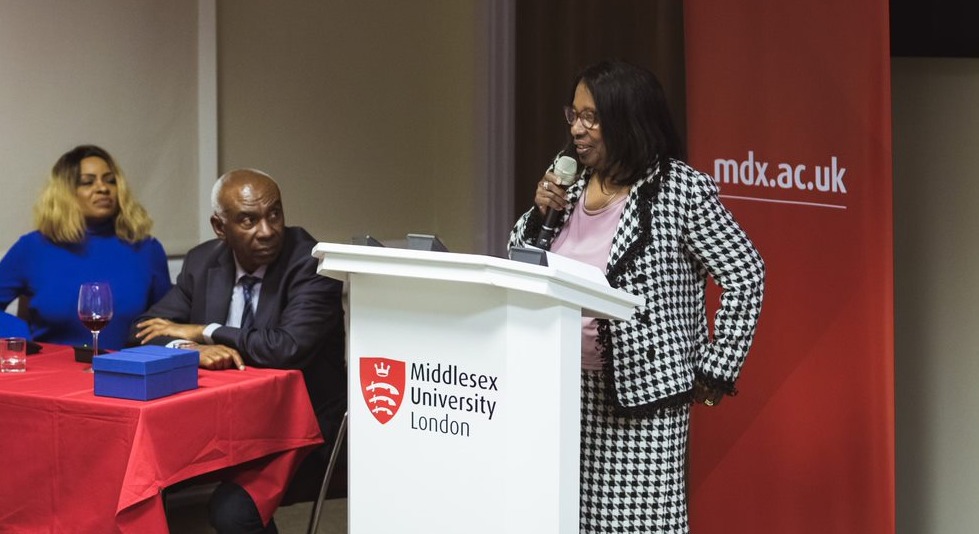 As part of a line-up to represent the past, present and future of Black History Month, Bishop Dr Beswick, senior pastor at Nebaioth Ministries, Stockwell and former Dean of Lambeth and President of the Christian-Muslim Forum, talked about her route to her vocation via nurse training, her range of spiritual leadership roles, and her strong desire to address inequalities in the UK. “I think the future looks bright, regardless of what is happening in our society,” she said, arguing that we can achieve great things when we recognise our common humanity and pull together. 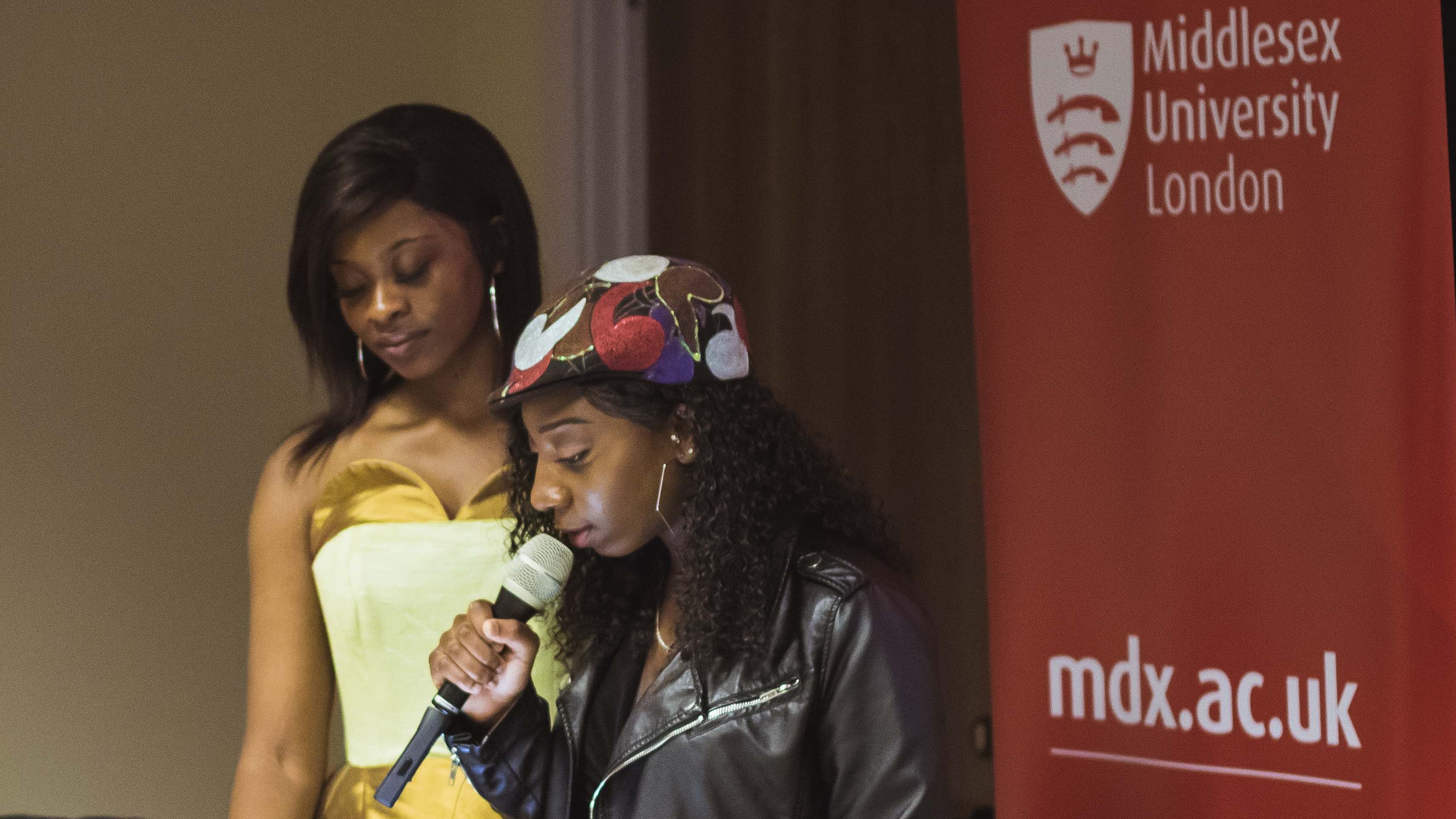 Symbolising the present, Middlesex students Sade Ogubuike, from Paddington, and Elizabeth Farinto, from Kent jointly read a poem they had written about black identity, and messages posted on a board by students and event attendees set out hopes for the future of Black History Month.

In an interlude, Farinto modelled a striking ballgown with a section featuring one of Dr Wilson's paintings, while Ogubuike wore a hat incorporating another. Later, young menswear designer Buckarie Dumbuya and a friend modelled clothes from Dumbaya’s own Buckarie brand, which mixes a contemporary aesthetic with design elements from West African countries such as Ghana and Sierra Leone. 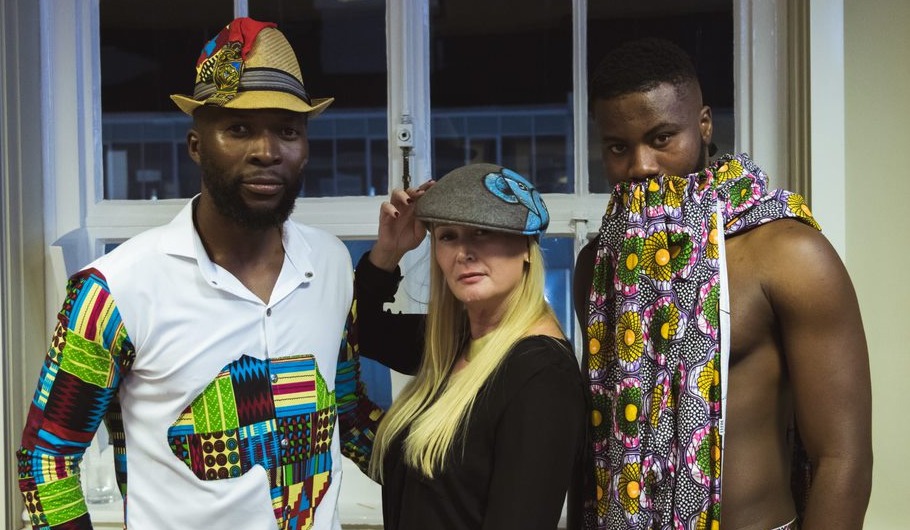 At the end of the event, singer, actor and artist Patti Boulaye, a visiting teaching fellow at Middlesex, praised the University’s work that had led to the UKIED Charter Mark. “I’ve watched Dr Wilson for a few years work so hard to get this charter” she said. 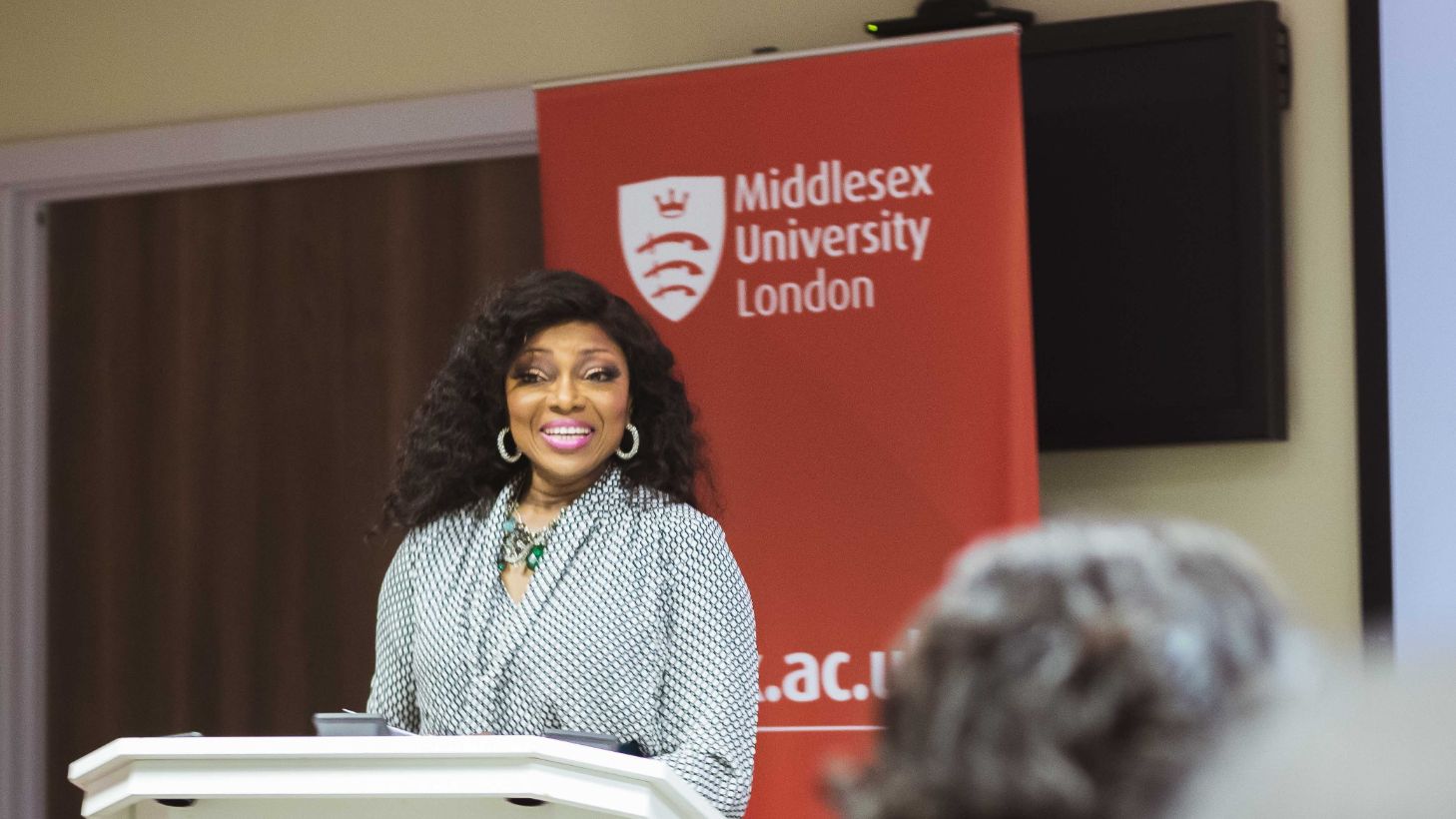 Issues discussed included the impact of Brexit on hate crime, the racist tirade by Ryanair passenger David Mesher, and whether sanctions are currently strong enough for those who commit hate crimes. 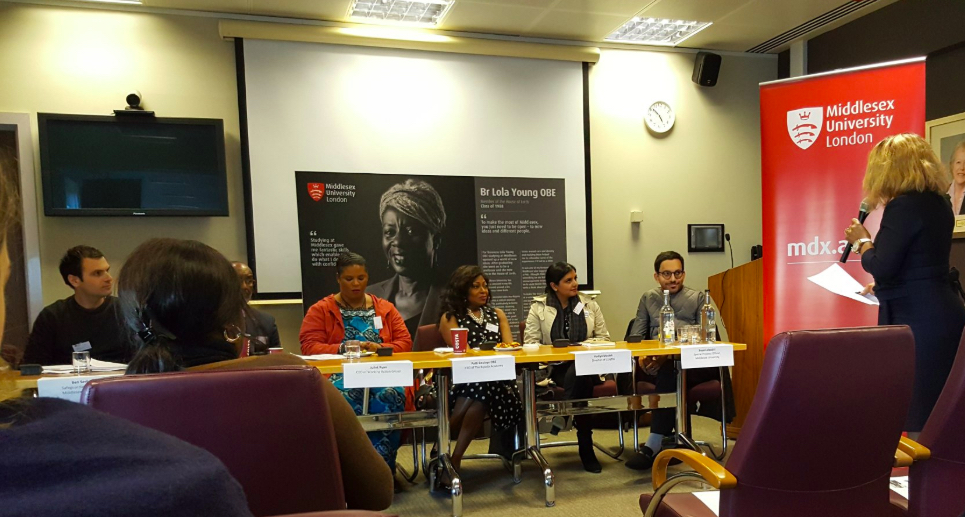 Juliet Ryan, whose son had racist slogans written on his shirt in an end-of-school shirt signing ritual last summer, said "Brexit is just an example of structural racism in action. We have to look at what structures [are] in place that keep the imposition of us as 'less than'". Patti Boulaye talked about her experience growing up in Nigeria during the hatreds of the Biafran War, which "made me realise how insignificant we are".

Leroy Logan, who clashed with the Met over racism in the service while he was an officer, described a recent incident where police officers handled a black family harshly, then failed to apologise when it turned out to be a case of mistaken identity, suggesting a white family would not have been treated in this way.

He also argued for the importance of moving from an enforcement to a public health approach on crime, saying that when he discovered the adverse childhood experiences and self-loathing of some of his school contemporaries whom he arrested when he first became an officer, "then I realised how fortunate I was just having a loving, nurturing home. And that's unfortunately what's manifested on our streets now with the violence".