Middlesex has built on its growing reputation for student robotics by winning a prize for innovation in Europe's foremost amateur autonomous robotics competition.

In the final of Eurobot 2019 in La Roche-sur-Yon, France, where the task was to programme tabletop robots to pick up and correctly sort coloured pucks while avoiding bumping into other robots, Middlesex impressed judges with a text-to-speech instruction system and a touchscreen interface for their devices. Artur Graczyk, Camille Croci, Chibuike Okpaluba, Muhammad Ali Hussain Javed, Szymon Klimek and Szymon Malecki faced a field of over 200 teams that generally were 10- or 15-strong, but still managed to move MDX up 12 places on its ranking last year.

(so named because "every time we met it was a massive brainstorm" says third year Mechatronics student Muhammad Ali Hussain Javed) stood out for using robot operating system ROS, rather than a more familiar programming language, and a powerful main circuit board called the Latte Panda; having speakers on their robots for the text-to-speech system, which helped them avoid human error; and for having just one pullcord that activated all three of the competing bots at once wirelessly. 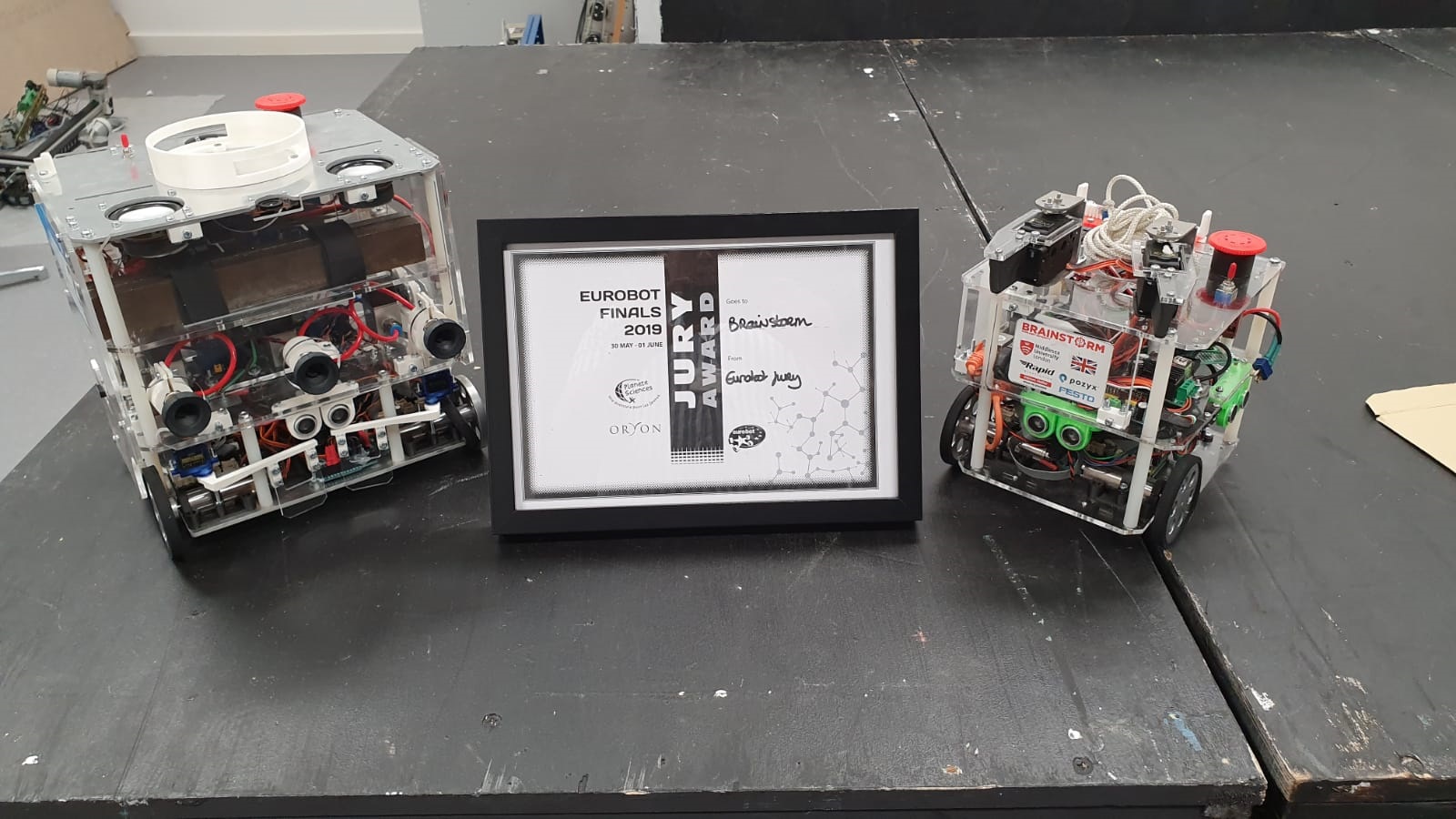 “We created our own interface which allowed us to create a strategy”, says second year computer science student Szymon Klimek. “It shows a visual of where the robot is on the table and shows how it moves around”. The team also attracted sponsorship worth around £15,000 from companies including Maxon Motor, automation technology supplier/industrial training provider Festo, non-GPS navigation specialists Pozyx and Rapid electronics.

This year’s contest brought together engineers (Ali and Chibuike) with computer scientists. "Everyone has different skillsets. It's nice to have people from all the disciplines", says Szymon, enabling the team to narrow down ideas to practical solutions and to build and change the robots rapidly. Between a pre-competition dry run in Serbia and the UK national finals at Middlesex in the spring, the team completely redesigned their big robot so that it could pick up more than one puck at a time, with further modifications before travelling to La Roche-sur-Yon. The intention now is to recruit first and second year students studying a range of subjects to the team, to establish a continuity in the technology and strategy for both Eurobot and the WorldSkills UK robotics competition in November. 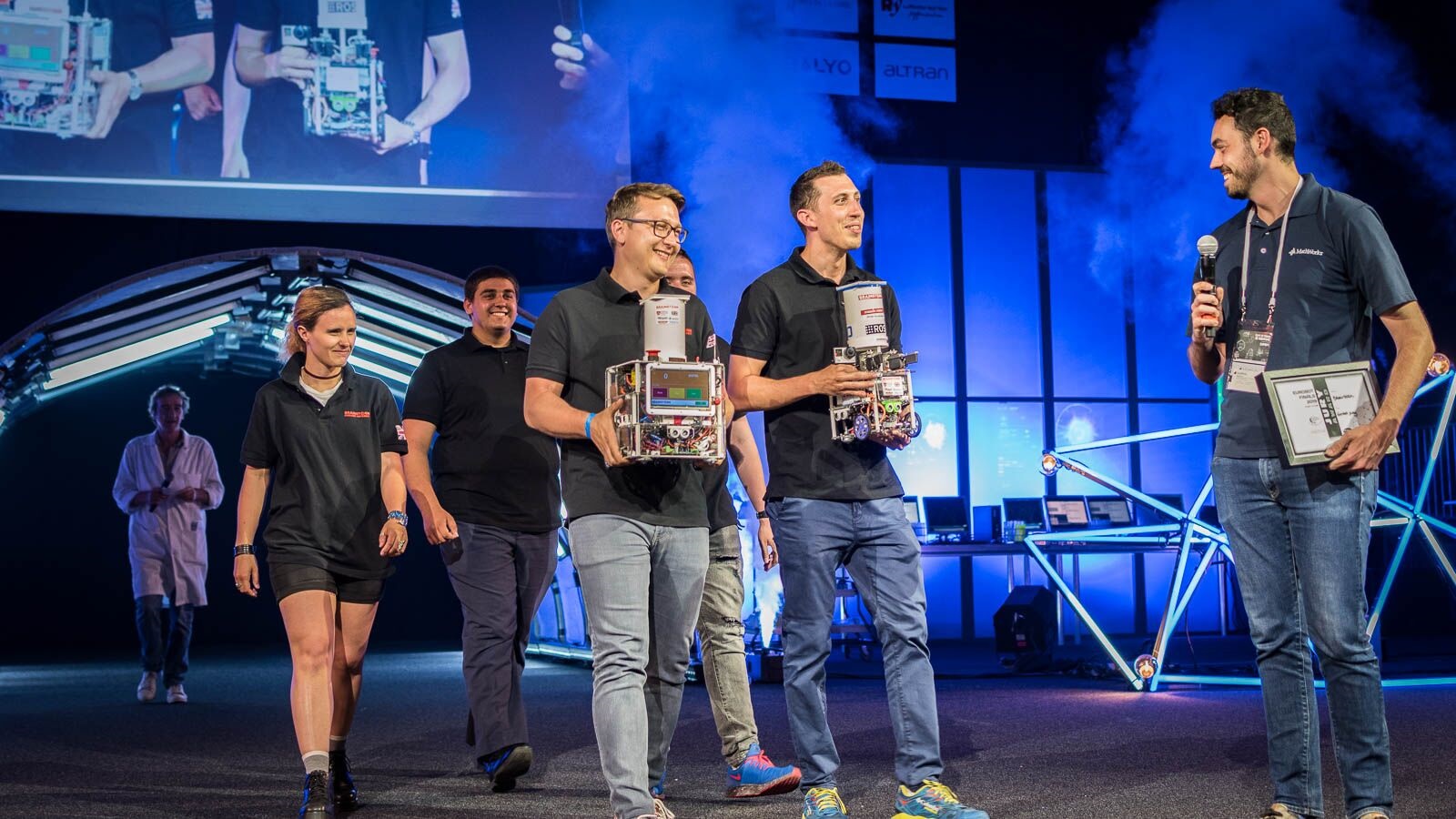 “You should have seen the smile on my face after the whole competition!” says Ali, who describes a friendly atmosphere in the final with rival teams lending each other tools and sharing food, and an intriguing variety in the designs produced to tackle the challenge. Unlike teams from other countries for whom taking part in Eurobot is on the curriculum, the MDX students did all their work in their free time, meeting weekly on a Friday. The appeal of taking part, says Ali, is gaining an insight into the autonomous technologies – not just robotics – that manufacturers from the car industry to retail are investing in, through the whole product design cycle. “If you learn that in university, once you go into industry, you'll be ahead of everyone else applying” says second year computer science student Artur Graczyk.

As host of the UK finals of Eurobot and home of the UK Organising Committee, Middlesex provided two referees for the grand final: Associate Lecturer in Design Engineering Mehnaz Mahaboob, who took part in Eurobot before she graduated in Mechatronics in 2016, and Harry Hamilton, experiencing the event for the first time. Mehnaz describes the MDX team’s expanding technical skills and ambition since she was a competitor and Harry forecasts more success to come: “I think it can only get better” he says. “The hardware to build the robot isn’t going to go to waste - you can use it next year”.