Operation Black Vote co-founder calls on Lords "to lay bare the uncomfortable truths" around tragedy, and be "a beacon of hope" in rudderless times 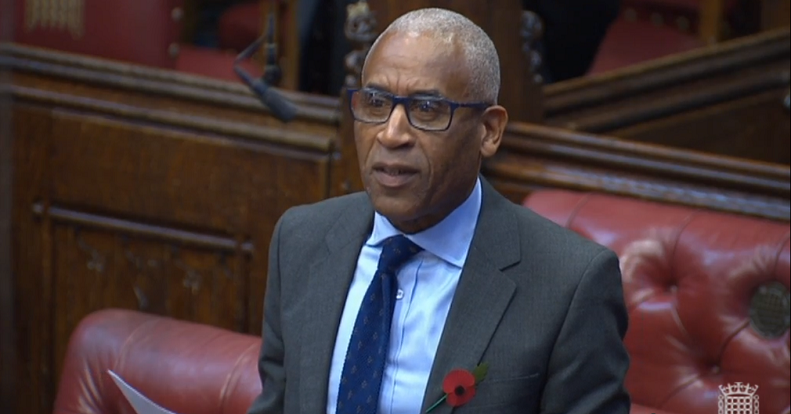 MDX alumnus, political and equalities campaigner Lord Woolley, spoke of the fight for social and racial justice in his maiden speech to the Lords today, on the first phase of the Grenfell Tower Inquiry report.

Joining the debate on a motion proposed by former Housing Minister Lord Bourne of Aberystwyth, he said: “We owe to those who have lost their lives, survivors and families to lay bare the uncomfortable truths”, including “the contributing elements of poverty and powerlessness. How do we challenge the systemic structural failures?”

In a passionate and personal speech, Lord Woolley thanked a series of people including Lords staff for their helpfulness, Theresa May for having faith in the idea of the Race Disparity Unit, for which he was chair of the advisory group, and his adoptive mother for bringing him up. “My mum taught me to have good manners and respect, to fight for myself and fight for others” he said. “I think she knew that I would be a disciple of Martin Luther King and Bernie Grant”.

He described the foundation of Operation Black Vote in 1996, with voter registration the “bedrock” of its work: “You give people a voice by ensuring they have political power. We must ensure we get our citizens to register to vote and engage them in our democracy”. He noted that there were just four BME MPs when OBV was set up, and now there are more than 50.

He also spoke of his ambition for drugs policy reform that would address “heart-breaking” black-on-black killings. With the country “crying out for strong, decent and collective leadership”, he called on his colleagues in the Lords to be “a beacon of hope”.

Lord Woolley began his working life as a car mechanic in Leicester, and was a door-to-door salesman and advertising seller for Rank Films when he first moved to London, aged 19. He did an access course and came to Middlesex to study a joint honours English and Spanish BA, in the course of which he spent time living and studying in Costa Rica and Colombia. He went on to study a Masters in Latin American literature at Queen Mary, University of London.

Moving into the field of equal opportunities campaigning, he was involved in civil rights group Charter 88 before conducting a research project on the impact of minority voters on election outcomes, which led to the formation of OBV. He was strongly inspired by the civil rights movement in America, having worked with Al Sharpton and Jesse Jackson. As well as voter registration, OBV has campaigned tirelessly on issues such as race discrimination and police misconduct.

He served for three years on the Equality and Human Rights Commission and has been a Board member of the London Development and Sustainability Commission.

Simon Woolley received a knighthood in the Queen's Birthday Honours 2019 for his services to race equality. A month later, he was nominated for a life peerage in Theresa May's resignation honours, to sit as a Crossbencher as Baron Woolley of Woodford in the London Borough of Redbridge.

MDX Professor of Journalism Kurt Barling, who investigated the 2009 Lakanal House fire as a BBC special correspondent and has described the Grenfell Tower disaster as “no accident”, was in the gallery to hear Lord Woolley’s speech.

“Lord Woolley of Woodford, Simon Woolley as I’ve known him for many years, has devoted decades of his life to ensuring Britain is a fairer, more inclusive and open society for its diverse communities,” Professor Barling said. “He has made a difference to national debate on the position of people of colour in society, and towards make a reality of change in the daily lives of citizens irrespective of their ethnic origin.

“Lord Woolley has campaigned, lobbied and advised successive governments on making Britain a more accountable society and he has made it a richer, better and more tolerant country for it.  That a man from humble Leicestershire roots can emerge from MDX to make such an impact is an inspiration to all those who belong to this University community.”