Middlesex University academics recreate ancient instruments, including the trumpets of the God-King Tutankhamun and those which were the pre-cursors to the modern oboe 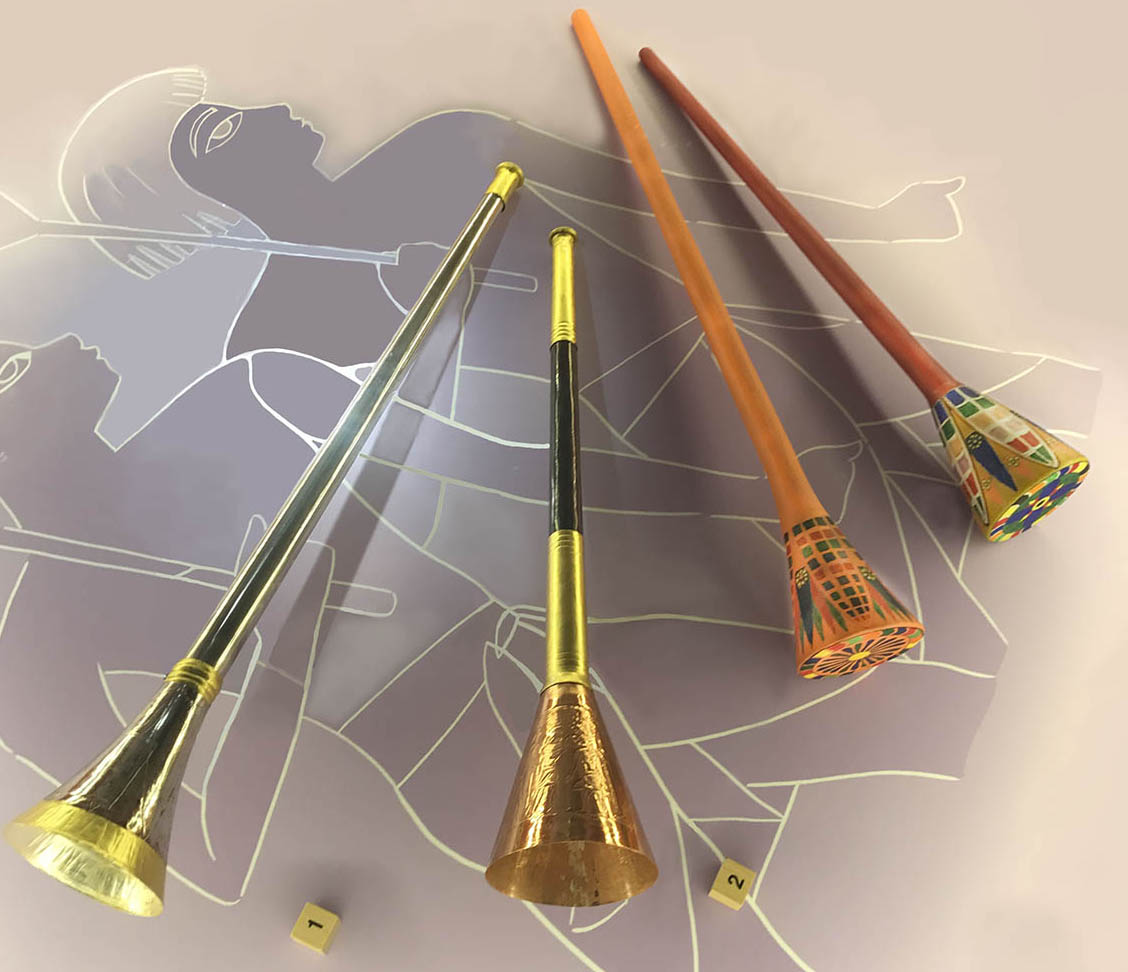 Middlesex University academics have recreated ancient instruments and they are on display at the Museum of Fine Arts in Boston, USA as part of its Ancient Nubia Now exhibition.

While the reconstructions of the Tutankhamun trumpets are not the first, they are the first to bring the entire suite of artefacts back together in three and a half thousand years. The pipes from Meroë, however, are the first ever reproductions of these ancient African instruments.

“These pipes date from the year 1 CE when Queen Amanishakheto died and they were presumably played at her funeral. The find is unique in that three different types of instrument were found together and it was previously believed that these were only used at different times. Along with the other artefacts in the exhibition, the pipes provide evidence of the rich cultural life in this part of Africa at the turn of the millennium.”

The team is now working on the more-complex massive tibia in this find, the largest such instruments from the Graeco-Roman-Meroitic world. These represent enormous new challenges on all fronts, these deriving both from their organology and their technical construction.

It is also working on a separate Meroitic find of a salpinx (a Graeco-Meroitic trumpet) from around the same period, in conjunction with the Humbolt University in Berlin

"Most of the instruments made are the first-ever reconstructions in modern times and mark the latest offering to the world of ancient music, bringing its sounds to the ears of the modern world." Dr Peter Holmes, Middlesex University

The project leads on from the European Music Archaeology Project (EMAP) for which Middlesex was a key partner.  The project received a grant from the EU to research, design and manufacture musical instruments from ancient civilisations.

EMAP’s main objective was to make use of both ancient and modern technologies to recreate and perform on the musical instruments of ancient European civilisations. The project aimed to highlight the links that existed between peoples of Europe in ancient times.

This is the first time that any of the auloi from Meroë are being presented to the public. This particular aulos, part of a set, referred to by the reconstruction team as the “wooden pipes”, consists of simple bronze tubing, which was originally lined with a hollow wooden core, made from European olive wood.  Both bronze tubing and wood were likely shaped by lathe turning in antiquity, which allowed precise and air-tight fitting together of the sections, quite similar to the connections found on today’s wind instruments. The manufacture of the bell-shaped ends calls for very delicate metal-working, thinning out the bronze and finally working it over the sharp edges of the wooden core.

Much of the ancient timber has disintegrated beyond recognition, while the corroded bronze shell was reconstructed from smaller fragments, with a few tube sections having remained almost unbroken.

The pair consists of a higher and a lower pipe; the fingerholes of the latter are spaced so widely that one particular note can only be accessed by means of a short angular side tube of cast bronze, adorned with subtle decoration. Since this particular pair contains no mechanism for opening and closing fingerholes, its shining bronze encasing must be considered purely decorative.

Learn more about music at Middlesex.