MDX staff, undergraduates and postgraduates volunteer at annual event: " a great experience to practice communicating science to the general public" 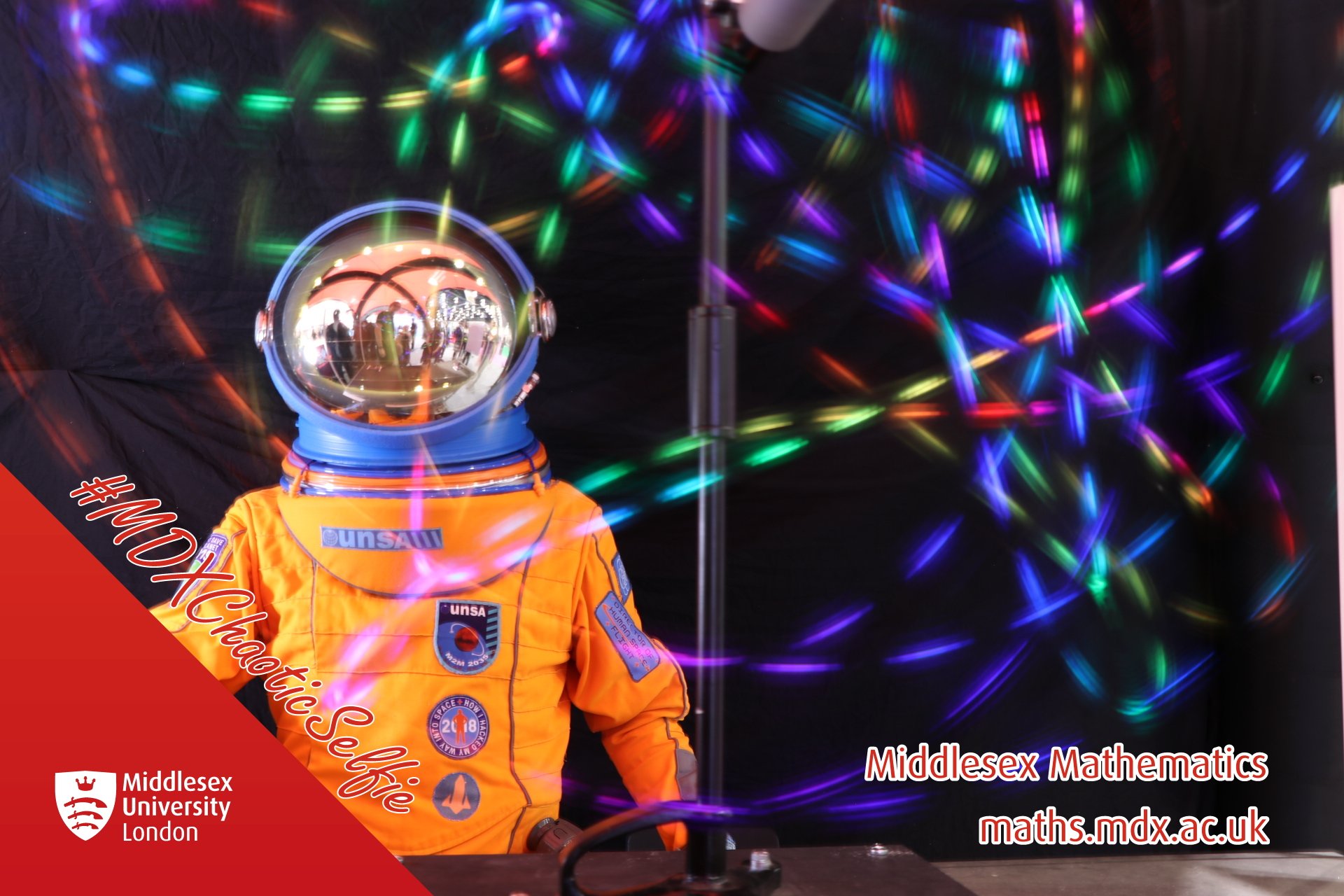 A big team of MDX staff and students are once more volunteering at annual four day festival of ideas and scientific discovery New Scientist Live at the ExCeL Centre, which this year boasts more than 150 exhibits and over 120 talks. 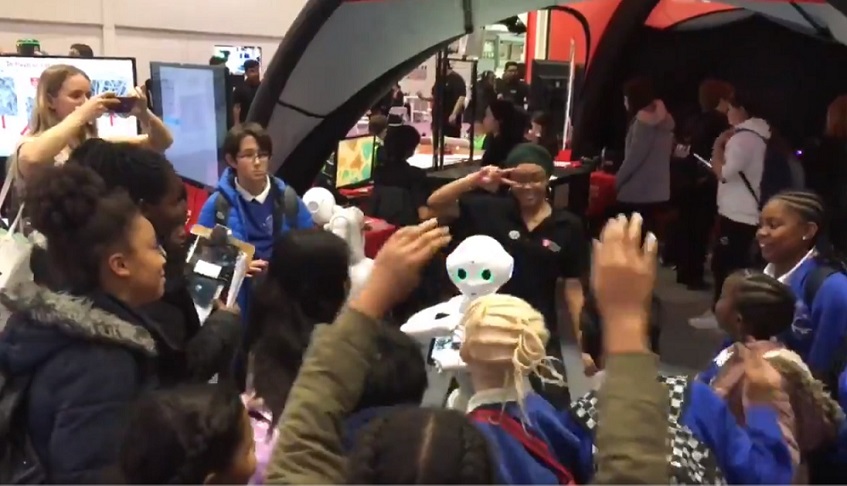 There are two MDX stands introducing science, engineering and mathematics concepts with interactive exhibits and games. Highlights include "chaotic selfies" against the always-different, unpredictable light trail produced by a swinging double pendulum (pictured at top); taking part in a life-size interactive Super Mario game, running and jumping to control Mario on the screen; using a state of concentration or meditation picked up through an EEG monitor to lift a object on a screen or make it burst into flames; terraforming a sandbox landscape with a gradient map projected onto it; and interacting with MDX’s robots Pepper and Baxter. 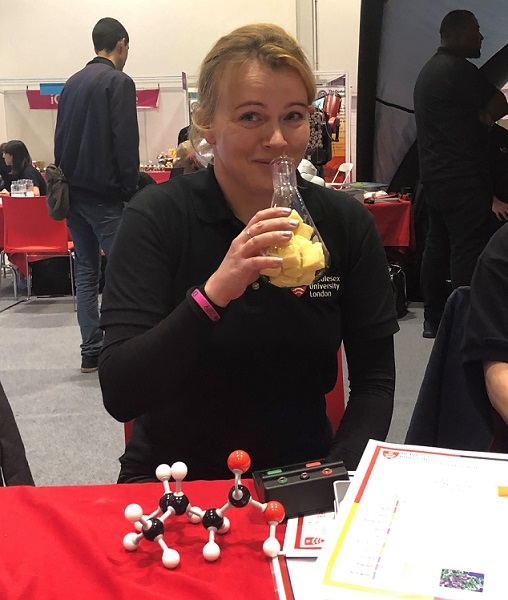 There are two MDX exhibits on the New Scientist Live Science Hunt, earning young visitors a sticker on completion and enabling them to compete for prizes. A Chemistry Challenge around building model molecules of the flavours in grapes, cheese and crisps against the clock has proved very popular, with pupils coming back again and again to beat their own times. Some felt that they were good with the models because they were good at Lego, says Biomedical Science lecturer Beata Burczynska (left). In addition there is a plastic pollution-inspired observation test which involves looking at different plastic polymers through a microscope. A exhibit, relating to research by MDX Professor Hemda Garelick and technical tutor Leonardo Pantoja Munoz, demonstrates the problems caused by flushing wet wipes even when they are advertised as flushable.

The 'MDX' Motion Driven eXperience is a project developed over the past five years by staff, postgraduates and undergraduates - a moving platform with a chair, coordinated with a VR sequence watched through an Oculus Rift headset which simulates the sensation of being on a rollercoaster. It has also thrilled visitors to WorldSkills UK LIVE, Thorpe Park’s STEM Fair and the STEM Festival in MDX’s Quad. At this year's New Scientist Live, two different rollercoaster routes, one more vigorous than the other, and a fantasy ride through space are on offer. 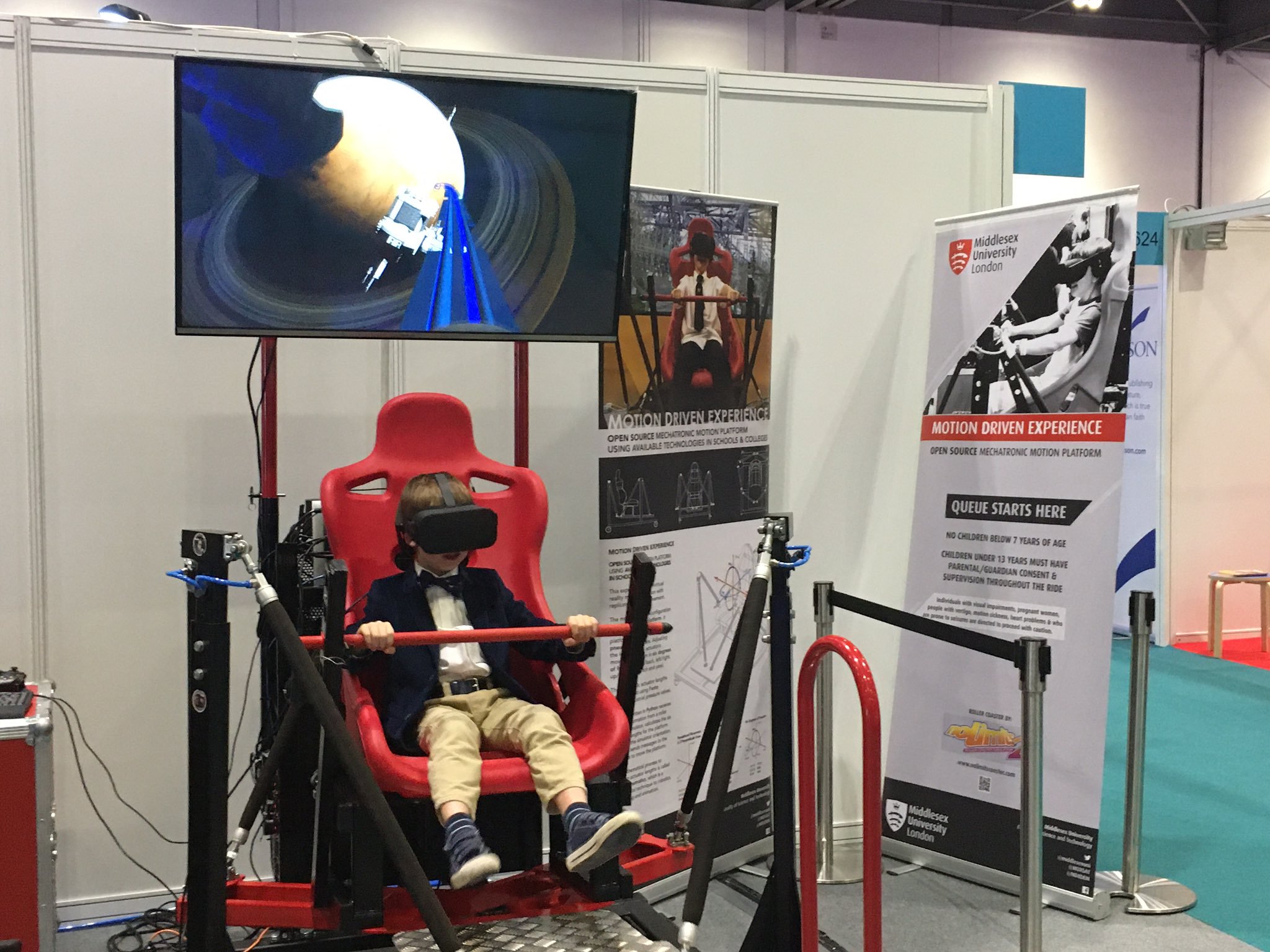 “I like the details, the details are amazing - the clouds, the hills - and the minor movements, the jogs and the stoppings” says Svenja, a Year 13 student and aspiring medic at Villiers High School, Ealing. “When you’re on it, it feels really realistic. My son genuinely thought he was going upside down” says Clara from Ramsgate, whose three older children Neveah, Harper and Safiya all tried out the ride.

The MDX technical team is now working on a "magic carpet" adaptation of the ride, which will be a "much more flexible platform in terms of what we can do and how many people we can have on it," says Technical Tutor Michael Margolis. Representatives from the Royal Aeronautical Society visited the show on Friday - they are using the Motion Driven eXperience as the basis for a competition for school pupils to design a flight simulator. 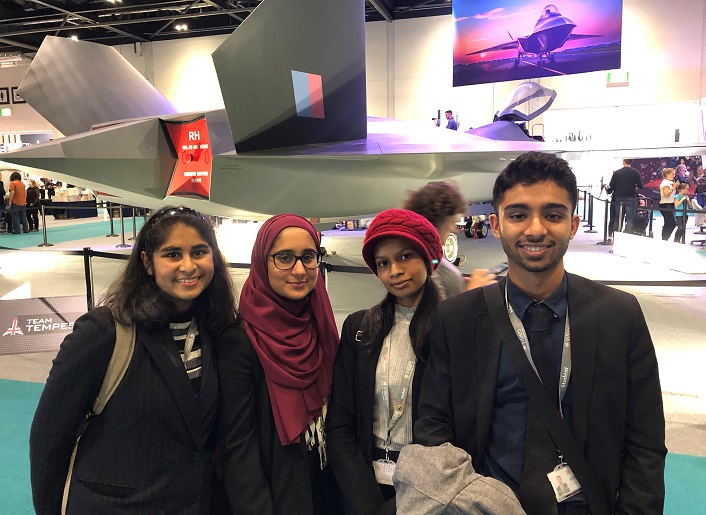 Dirk Wildeboer, MDX Senior Lecturer in Bioscience and Biomedical Science who co-ordinated the natural sciences activities on display says that students and staff taking part “really enjoy it – for students it’s a great experience to practice communicating science to the general public".

Beata Burczynska, who has volunteered several times at New Scientist Live says "it's a very exciting event. It's nice to be a part of this developing event in London". Her Biomedical Science colleague Zhanzhong Shi, also a repeat volunteer thinks it's a helpful showcase since "people get to know Middlesex".