Student short film at City Hall Thrive LDN festival, moving TEDx video and canine teaching assistants reach out to those who are struggling 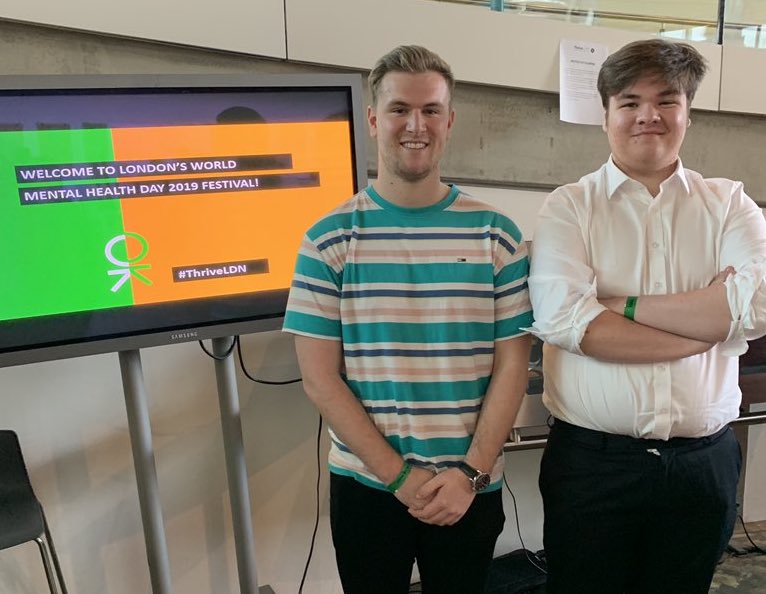 A short film by MDX Film students being shown at City Hall today is one of a number of ways staff and students are reflecting on World Mental Health Day.

Stand Up, Don’t Man Up was made by Zack Pitcher (director) and Henry Jones (producer) last academic year as a first year project to relay a campaign against hate crime. Anonymous young male faces shot below eye level aim "banterish" insults that challenge a victim's masculinity at the camera. The film is being screened as part of a day of shows, activities and debates on the subject of mental health hosted by the Mayor’s Peer Outreach Team and citywide campaign group Thrive LDN.

Zack and Henry, both 19, chose the subject as they were shocked by the male suicide statistics – on average 84 men a week or 12 a day kill themselves across the country; 75% of all UK suicides are men under 35. Having recently made the move to university themselves, they were conscious of the alienating experience people can have of being surrounded by peers but feeling very alone, and wanted to reassure other young men that it is OK to talk about your emotions and to admit you’re struggling.

The one minute-short involved filming around 25 people in one afternoon. The quick turnaround time was “really fun”, if demanding, says Henry – an opportunity to learn “an important part of being a low-budget independent filmmaker”.

They got the email to find out they had been picked for the festival before they started their second year classes. “It’s a wonderful surprise” says Zac. “It’s a good cause to talk about, a good cause to be recognised for. It’s got me more excited to make more films”. Henry says they have “a huge amount to thank for the facilities and amazing expertise of the lecturers” at MDX and describes their first year tutor, working documentary maker Valentina Ippolito, as a “wonder woman”.

Associate Professor in Clinical Psychology Dr Fiona Starr’s TEDx talk at the King Alfred School, Hampstead, with her Tavistock and Portman Trust colleague and long-time friend Dr Mike Solomon has received thousands of views since it was recorded earlier this year. In it, Fiona and Mike open up about their personal experience of trauma, including Fiona’s husband’s suicide and Mike’s diagnosis with cancer. They offer an eight-point manifesto for "managing shit after shit happens": including reciprocating offers of help, developing powers of mental focus, striving to be good enough rather than perfect, and being like a 1970s Weeble toy, which wobbles but never falls down and always rights itself. Mike died three weeks ago - in tribute to him, we share the video of the talk above.

Associate Professor in Psychology Lisa Marzano’s research, commissioned by Samaritans on behalf of the rail industry into how rail travellers react to somebody in distress or who is suicidal has completed data collection and now moves on to analysis. On the basis of the results, Lisa and her co-authors hope to produce a guide to help commuters and the public know what to do in a crisis situation. Lisa’s previous research into what causes people to take their lives on the railways found that for every life lost, at least six seem to be saved by those around them, and spearheaded the rail industry’s ‘Small Talk Saves Lives’ campaign urging travellers to start talking to a person in distress to interrupt their suicidal thoughts.

Middlesex is this term piloting health tech company Fika’s Emotional Fitness App, which offers five minute emotional exercises to boost students’ resilience, focus, confidence, empathy and listening skills. Deputy Dean of Arts Mark Hunter says: “The Fika App is an exciting initiative. Middlesex is delighted to join the pilot, and I hope the App will help support our excellent existing work around student and staff mental health and wellbeing”. More than half a dozen psychologists have worked on the App which is mapped against NICE guidelines and draws on a wide variety of psychological theory and research.

MDX's five canine teaching assistants, introduced to help reduce anxiety and boost student wellbeing have become familiar figures around campus. Students can interact with them at a drop-in centre every week, and in the run-up to exams the dogs have visited lectures and revision sessions. They've been featured by outlets including the BBC, the Independent and Swiss and Irish media. "It's hard to describe the impact of just having a dog lying down in the corner of a class. You can literally feel stress levels reducing," says MDX Head of Clinical Skills Fiona Suthers.

Public Health England this week launched the Every Mind Matters campaign with a film written by Richard Curtis, directed by Rankin and narrated by the Duke and Duchess of Cambridge and the Duke and Duchess of Sussex. The campaign offers free resources to help adults become more aware of the state of their mental health and take steps to look after their mental health and wellbeing; for tips and advice, visit the campaign home page on the Public Health England website.