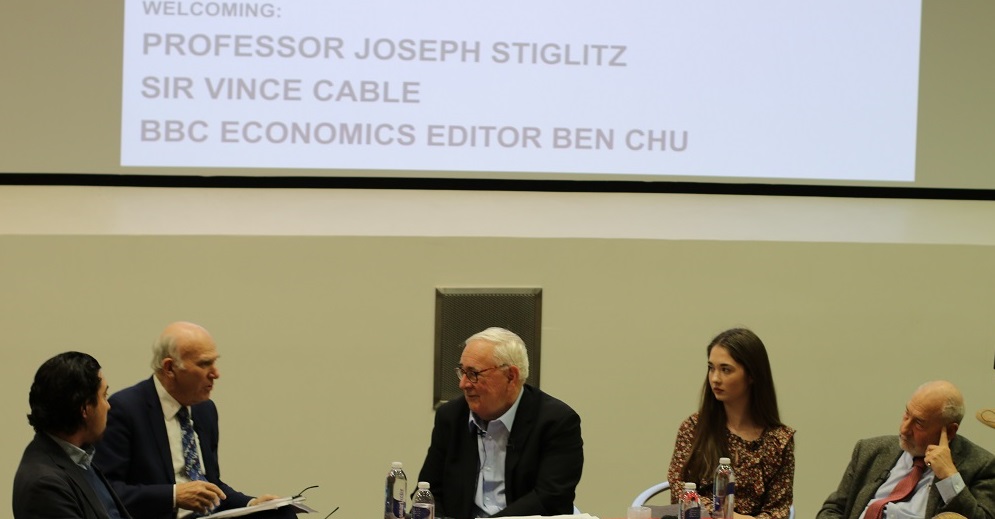 A leading US economist called for governments to offer guaranteed employment during a debate on inequality and how it is reported in the media at Middlesex University last night.

In front of a packed out hall, the economic experts, politicians and journalists spoke with conviction about the issues around inequality and how it is covered by news publications.

In response to a question about universal basic income, Professor Stiglitz said the priority of government should be to ensure everyone who wants one has a job.

‘We (the USA) do everything bigger and better including inequality,' Professor Joseph Stiglitz.

Professor Stiglitz, a Professor at Columbia University, said: ‘High levels of inequality undermine our democracy and the consequences are becoming evident.’

This MDX series has sparked debate on the biggest challenges in society today and has now turned its attention to the economy and media coverage.

As the audience listened intently, Prof Stiglitz drew comparisons between the gap between rich and poor in the UK and the United States.

A recent study in the US had revealed the bottom 50% pay more tax as a percentage of their income than the top 1%, according to Prof Stiglitz, who was chairman of the US President’s Council of Economic Advisers.

In the UK, ONS figures presented at the seminar show that while the incomes of the top 1% have continued to rise, they have stagnated for the remaining 99%.

Only one US political party wants to make burden of tax on rich even lighter compared to the rest, Prof Stiglitz claimed.

Drawing smiles from the audience, he said that’s ‘one of the parties, I won’t say which one which it is’ .

He drew a laugh as he added: ‘We (the USA) do everything bigger and better including inequality.’ 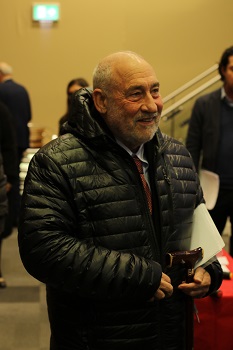 Speaking about poverty in Britain, Mr Cable said: ‘In our relatively rich country we should not have people sleeping on the streets or having to go to foodbanks.’

Mr Cable accepted that there was growing inequality in Britain but cautioned that any plans to tackle it had to be practical and deliverable.

He revealed that he had argued for a ,’mansion tax’ to tax very expensive homes while he was in the Coalition Government but this was blocked on fears it would be too politically unpopular.

When describing how some elements of the  media had covered this issue, BBC Newsnight Economics Editor Ben Chu said subjects such as mansion tax in the UK would always be ‘monstered by the right wing press because of vested interest’.

He added: ‘The coverage of highly charged issues such as inequality will I believe always be slanted and I don’t see that changing rightly or wrongly.’

Addressing how the media can better report on inequality, Prof Stiglitz praised an 18-month series of articles two to three times a week covering inequality by the New York Times called the Great Divide.

He said the NYT had made an ‘effort to present many dimensions of inequality with a lot of human interest stories.

‘It makes [the issue] very alive in terms of how people were affected.

‘They (the New York Times) were successful in moving the matter into the centre of the area and making people aware of the magnitude of the divide.’

While he also praised the Washington Post, he accused of the influential US television broadcaster Fox News of having ‘no qualms about reporting fake news’.

Mr Chu said that some televised debates and question shows could have been more informative if the presenters had been more familiar with the figures on inequality so they can ‘challenge certain assertions and claims’.

He added: ‘Just simply knowing the figures will help the media marshal the debate and get a more productive conservation going instead of being bogged down in false claims.’ 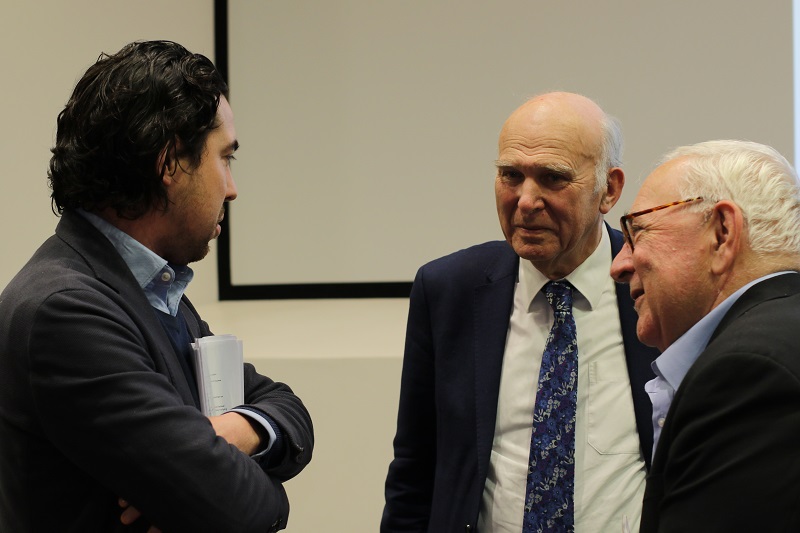 Mr Chu addressed the challenges faced by television news coverage of inequality, and admitted producers and directors were ‘turned off’ by detailed financial figures, and stressed that using graphics can be a ‘great resource if done rigorously’.

He conceded that the BBC faced other challenges, such as reaching a younger audience and insuring its newsroom was diverse both ethnically and in terms of their social background.

While the way the media covers diversity was placed under scrutiny, the debate moved on to claims the public have a lack of faith in politicians to tackle inequality.

Mr Cable, who will step down after 22 years as an MP following the General Election next Thursday December 12, was asked whether the public were cynical about politicians.

He replied: ‘The biggest problem collectively is promising far more than can be delivered.

‘The problem with this election is people are being offered tax cuts and massive spending but the simple brutal truth is in one or two years (after Brexit) British finances will be weaker than they are now.

‘And people will be even more cynical after this election because they are not going to get what was promised.’

To the biggest laugh of the evening, Mr Cable concluded: ‘My solution is austerity - we promise people austerity and then they get a pleasant surprise.’

The public talk with Professor Stiglitz followed a day of panels that tackled the latest research on the dimensions of inequality, how it is presented in the media, and how it appears in political and public discourse.

Additional financial support for the conference was provided by the Institute for New Economic Thinking.