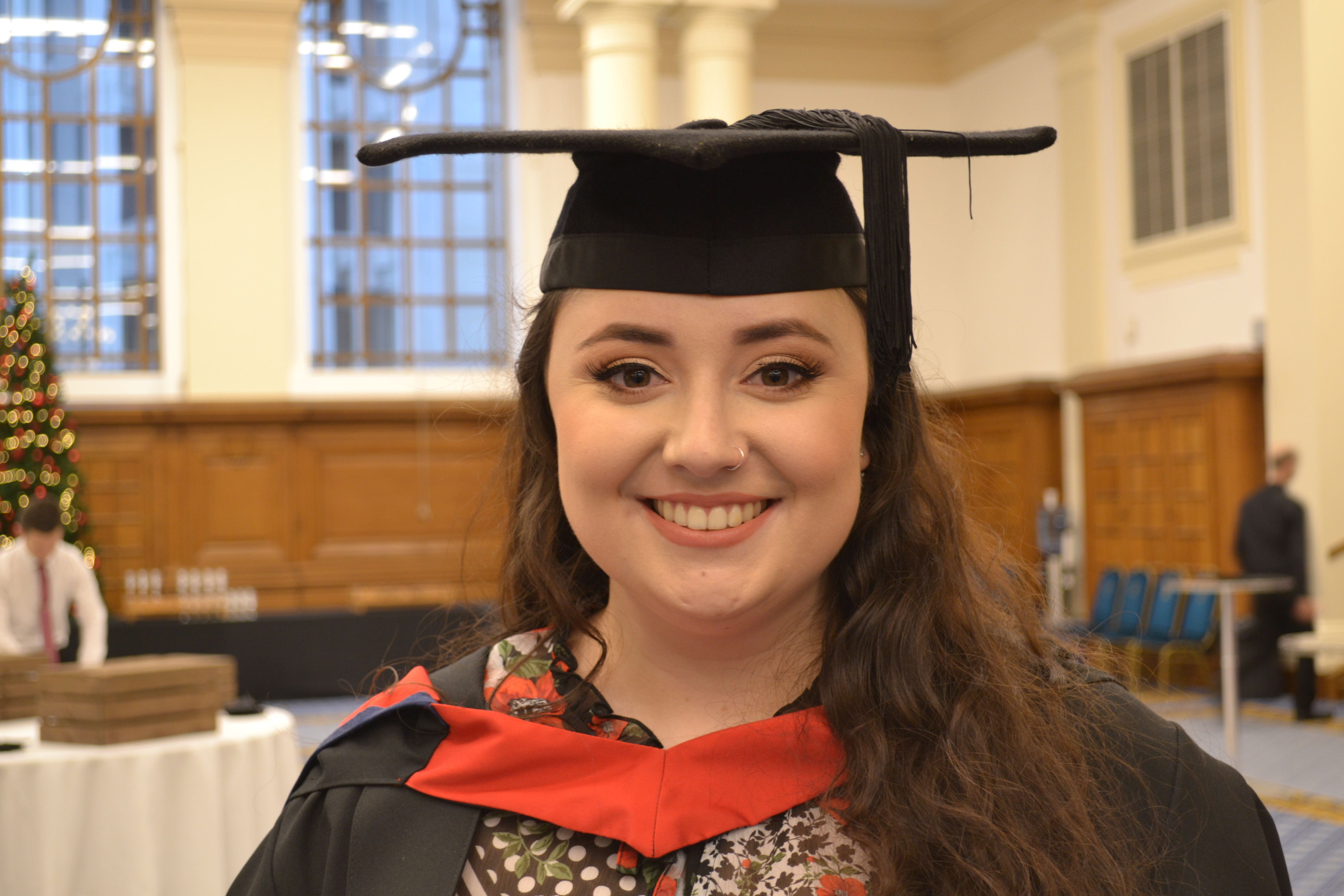 Among MDX Nursing students graduating on Tuesday were two completion awards winners who demonstrate MDX's collaborative and nurturing culture, and who made their mark with peers and tutors.

Adult Nursing graduate Lucy Miller is hailed by her tutors as a model of determination and resilience. She received a Completion Award at the end of her course for overcoming challenges, “and it brought me to tears, I was so shocked,” she says. “I’m so proud of myself for getting it. It was really nice to have acknowledgement”.

In her second year at MDX, Lucy faced big struggles around anxiety and depression – in her words, they “took over my life. I didn’t know how to look after myself or what was going on”. She took 12 weeks out, then withdrew from the whole second year when it became clear to her she needed to look after her mental health and get counselling and treatment.

Senior Lecturer and programme leader Julie Moody met with Lucy at this time to outline what would need to happen for her to return to programme. “The University gave me lots of extra support, they could tailor the programme,” Lucy says. MDX sent her for an assessment for her dyslexia, which had contributed to her problems, and on the basis of that she was awarded extra time in exams. She repeated her second year with more opportunity to do placements, and receiving continued support from Occupational Health. Starting her third year, she says, “it was like I was back to my old self, knowing myself and having given myself time to heal”.

"I allowed Lucy “to fly”, but kept a watchful eye from a distance” Julie says. “We had an action plan and progress guide for Lucy in Year Three, and she knew what to do if things started to go wrong, which they did not from then onward.

“She’s turned into a wonderful example showing qualities of resilience, emotional intelligence, ability to accept her own weaknesses and to share with others for her support. She has excelled in practice and academically.”

Now she is in her “dream job” in a renal transplant area with a 6th month ITU rotation in Bristol, where she was given a longer supernumerary status than usual as adjustment to her needs.

“There were moments when I thought everyone was against me,” Lucy says. “I’m so grateful to Julie. There was no judgement from her, she never said she thought I couldn’t make it which was really important to me, it never knocked my confidence. For her to give me an award on my last day which I never saw myself in a category of getting was so lovely, she understood”. Lucy also names tutors Georgina Cox and David Ring as being “really key – it was really nice to tell them that I’d got this job”.

“I have great confidence in Lucy for the future: she is an absolute shining star,” Julie says. “I know how much this means for her to get, and I shall not forget her”.

Simone Gordon is an Adult Nursing graduate who was shortlisted this year for a Student Nursing Times Award and has consistently worked on partnership initiatives and supported classmates during her time at MDX. She was a mature student who returned to university have originally studied Business and E-commerce marketing. She’s become a community nurse at Central London Community Nursing/Healthcare, a field which she says is where her heart is. “What I loved from my first year was being able to interact with my patients on a one-to-one level” Simone says. “It’s going into the home and holistically looking after that patient. Being able to make decisions kind of on my own.”

Simone was a nursing ambassador and student chair of the Healthcare Academic Race Equality Diversity and Inclusivity Network (HAREDIN). She was involved in developing the STEP (Strengthening Team Education in Practice) initiative, funded by Health Education England, which offers orientation and aids collaboration on placements through an App; she gave her time to feed the student view into meetings for the new MDX Adult Nursing Curriculum which commenced in 2019; and she jumped in to help the We Are The NHS campaign to transform perceptions of nursing and midwifery.

Simone says she is a behind the scenes person who wanted to be a student advocate since she “knew what it was like when I needed help and needed to know what was going on”.

Among nursing students, MDX has “so many different cultures – people coming from India, the Philippines, Nigeria directly to study, and wow it’s a culture shock” Simone says. “They might not necessarily want to speak up, because they don’t want to be seen as needy or stupid. I just wanted to be that go-to person where people were relaxed to approach me, who everyone could see and trust and say ask Simone. Sometimes I’d come to class and put a poster on the wall, and say this is going on, make sure you go”.

At Completions Day, she was awarded a Certificate of Excellence for Partnership Working and Initiative. Julie Moody says, “I cannot recommend her highly enough as an example and role model for her peers”.