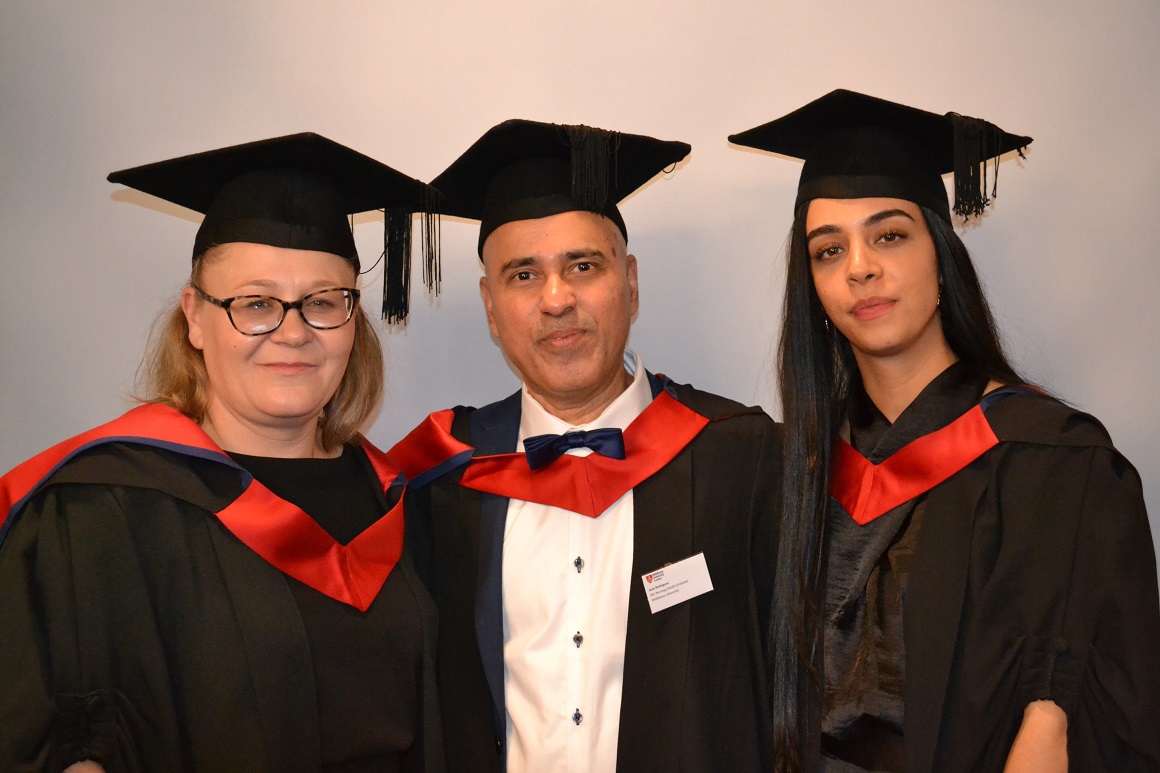 Middlesex's nursing students graduated officially at a bumper ceremony on Tuesday in the Methodist Central Hall in Westminster, Central London.

Among the hundreds of graduates was an inspiring midwifery student Harinee Manku-Scott, 25, who managed to complete her degree after both her parents died within months last year.

Remarkably she only missed only two weeks of her work placements.

Harinee said: "I thought about taking a year out but thought if I took the year out then I probably wouldn’t finish my degree.

"I just went and finished it to be honest, I don’t really know how.

"I think I was actually in a state of shock.

"I told my mum and dad that ‘I’m going to be a midwife’ so that’s part of the reason why I finished this degree.

"I’ve got two sisters and a brother and they were very supportive and they said if I didn’t go back I would find it harder because you wouldn’t have anything to do.

"So I needed something to focus my mind.

After her parents died, Harinee said she was helped by counselling which was offered by Middlesex University and she also praised her ‘amazing’ tutor Anabel Halawi, a lecturer in midwifery.

Anabel said: "Harinee has been an amazing student always attentive, polite and studious but has also shown such strength of character through adversity and graduating despite the odds.

"It has been a pleasure to teach her and be her personal tutor supporting her through this very difficult period in her life.

"She has also reconfirmed for me just how resilient people can be when times are extremely difficult.’

Working and studying as a midwife has changed Harinee’s outlook on life.

She said: "With midwifery you see people everyday on placement that are going through hard times, but on the other side you are with somebody when they have their baby which is probably one of the most important and joyous days of their lives.

"So it definitely grounds you and gives you different perspective."

Harinee, who is currently back in Bath, Somerset, where she grew up, plans to go travelling in January and visit countries such as Cambodia and Vietnam before returning to London to work as a midwife. 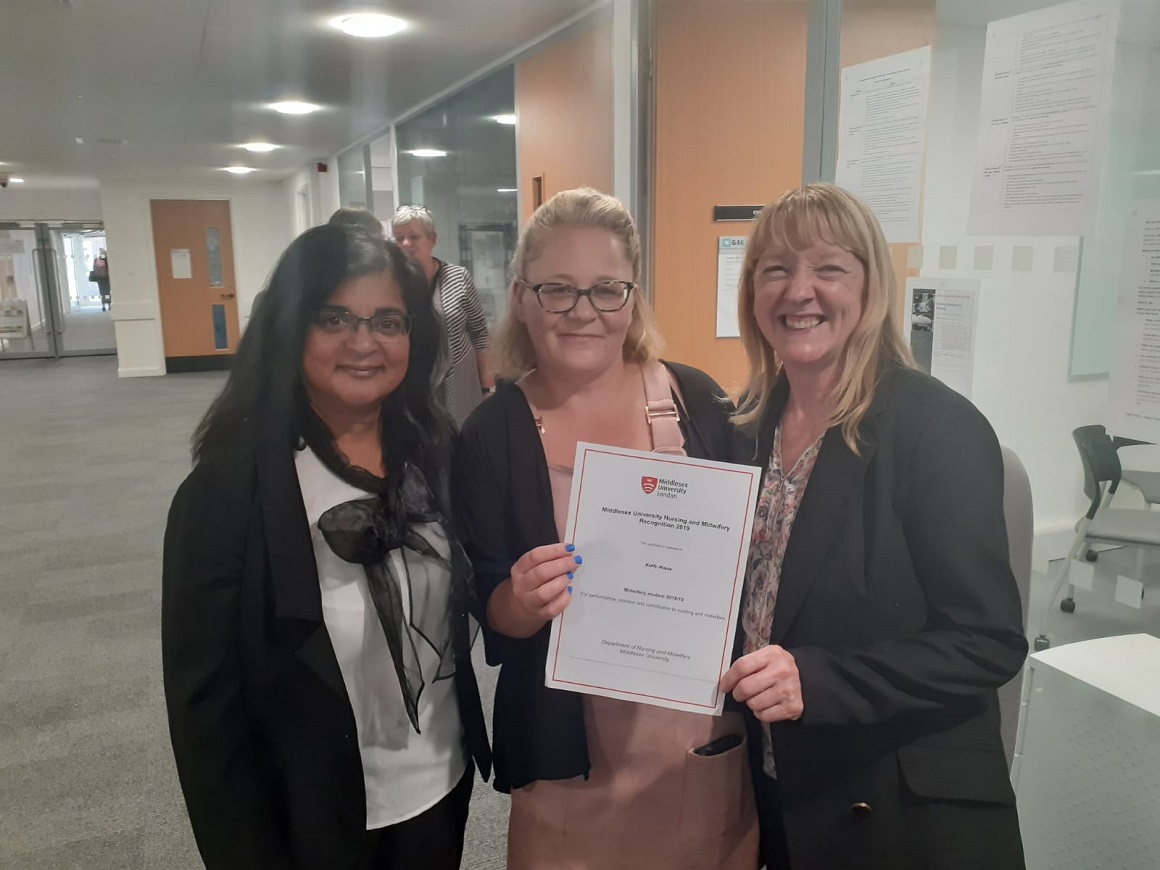 MIDWIFERY student Kelly Hayes, a grandmother of two, (pictured above, middle) achieved a lifelong dream when she graduated.

Kelly, 44, who grew up in Walthamstow, East London, has enjoyed stunning success on her return to education and was named a midwifery student of the year.

And the mother of two has thanked MDX for its welcoming environment which made the return to studies so much easier.

"I interviewed at a couple other universities and they didn’t feel diverse but when I interviewed at Middlesex I just knew straight away that it was the university I wanted to study at because it is very friendly, very diverse and very caring in the way it looks after its students," nursing student Kelly Hayes.

"Being a mature student is such a different experience and Middlesex were really good at accommodating my style of learning.

"When you are a mature student your life experiences come with you and the way you approach things is different.

"And Middlesex was very good at working with such a broad range as there were people on the course who were 21 and I was one of the oldest.

"The university embraces everybody’s life experiences and allows you to use it in your studies."

Kelly has thanked her partner, children and grandchildren for their support in achieving her goal.

On how it feels to graduate, Kelly said: "It’s very surreal.

"I wanted to go to university when I was young but just never had the opportunity so to get to go and graduate is a bit of a dream come true."

She has now been rewarded with a permanent job at Queen’s Hospital in Romford where she had been based on her placement.

In future, Kelly plans to explore parasitic disease in pregnancy as part of PHD studies after studying the issue in her dissertation.

She said: "We’re seeing more and more international travel and on top of that we have more refugees and asylum seekers and countries that suffer with parasitic infection.

"We neglect this when we are working with women who have travelled and it can lead to many foetal anomalies and complications, women and babies dies because of it." 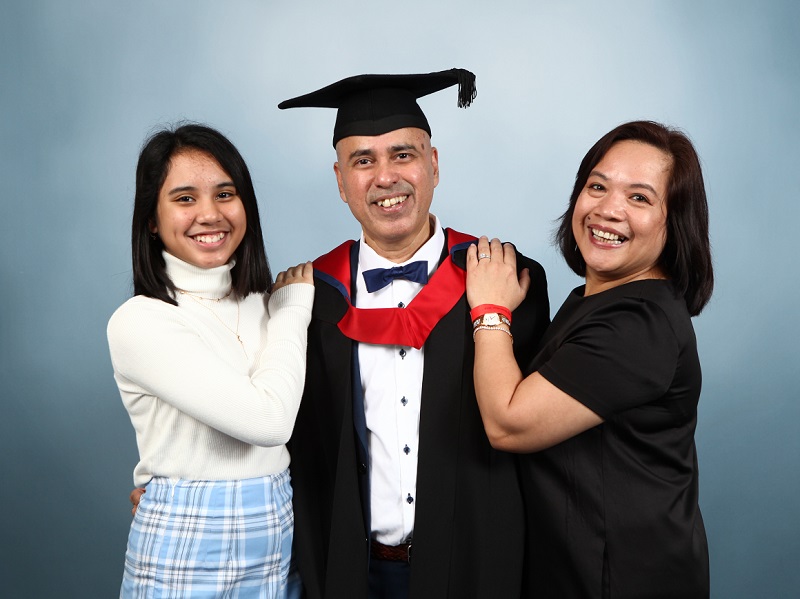 AN EXCEPTIONAL nursing student Jose Antonio Rodriguez was inspired to become a nurse because of the care his daughter Jelena received when she nearly died aged just six after suffering a ruptured appendix which caused septicemia.

At the age of 58, Jose fulfilled a lifetime goal this week as he graduated with a nursing degree.

And he revealed that it was the "empathy and compassion" of the nurse who treated his daughter that sent him on a journey to become a nurse because of the "difference you can make to people's lives".

Jose, a father-of-three, said: "She supported not only my daughter but myself with the words she spoke which gave me so much support and courage.

"I couldn't stop crying at the time.

"Empathy is the most important element of nursing. It's not just compassion because compassion can only be seen with empathy.

"If you're not able to put yourself in my shoes then you won't be able to be compassionate."

"It gave me such a great boost when you realise what learning can do for you - it empowers you," nursing student Jose Antonio Rodriguez.

Jose, originally from the Indian island of Goa, started his working life as a pharmacist and moved to the UK in 2003 after working in Saudi Arabia and the United States.

For more than 10 years he has been a health care support worker employed at Moorfields Eye Hospital in Islington, London.

But he always saw the "journey to become a registered nurse and never gave up".

He seconded to the university in 2015-17 on the two year DipHE Assistant Practitioner Pathway.

He achieved the requisite pass to allow him to apply for the Transition to Graduate Nursing between March and September 2018 and then entered the final year of the mainstream BSc Nursing between Sept 2018-2019.

In September, Jose was awarded a first class Hons degree and named the Adult Nursing Student of the Year.

Jose said: "When someone realise your potential and helps you to achieve that, this is what happened to me when I started four years ago.

"The teaching staff realised my potential it gave me such a great boost when you realise what learning can do for you - it empowers you.

He advised other student nurses to be "resilient and believe in themselves".

Adult Nursing Programme Leader Julie Moody said of Jose: "The pathway he has trodden has been long, challenging, and completely unknown territory for him.  He has demonstrated resilience, emotional intelligence and true spirit to achieve, but has done so quietly, without distraction, and applied himself to the challenge.

"With this achievement, Jose has grown immensely in his self belief and having known him for four years, it has been with pleasure and with great pride to have been able to help him along the way.

"He will make an outstanding nurse."

Find out more about nursing courses at Middlesex University: