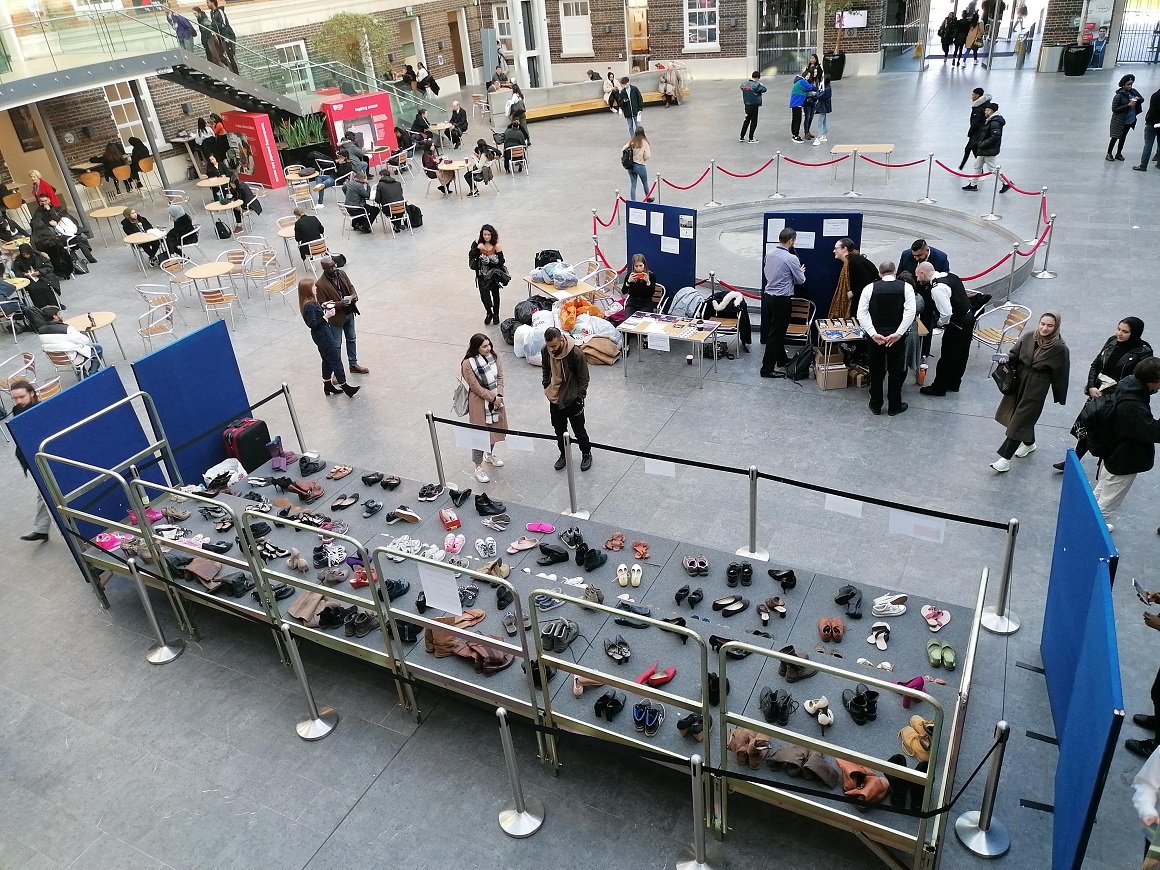 A powerful display in the Quad featured 111 pairs of shoes that represent the number of females killed after violence by men in the past year.

In support of the annual 16 Days of Activism against Gender-Based Violence, the shoes were displayed on a stage in Middlesex University’s main reception on Thursday.

Every week an average of two women (140 per year) die as a result of domestic violence and violence by men in the UK.

Karen Ingala Smith, the CEO of Nia a London-based domestic and sexual violence charity, working with Women's Aid has found through FOIs to police forces that since 2015 more than have 500 women were murdered following violence by males, but the figures are almost certainly higher because not every crime is recorded and some cases may involve ongoing prosecutions.

Mia Scally, an MDX Lecturer in Forensic Psychology-Criminology who has extensively researched domestic violence, organised the shoe installation to show her support for the 16 Days of Activism campaign.

“I feel trapped by this horrible person and he seems to get sanctioned by the legal system to do so."

"I can't really fully explain the effect he had on us all, he essentially turned us all into ghosts of ourselves because we were all walking on eggshells around him.” Domestic violence victims.

Writing on the Middlesex University blogging platform MDX Minds, Mia said: “Societal and structural inequalities faced by women on a daily basis to the notion that women are property, somehow less human, and deserve less than men - who have traditionally held positions of power in society.

“From cat calling, to sexual harassment, from ‘just another domestic’ to homicide.

“It is a slippery slope.

“Women leaving an abusive relationship are more at risk than ever.

“Despite this, rape prosecutions are at their lowest, funding to services is being cut, and welfare services disadvantage the women that need it most.

“The family courts are no exception to this, with survivors stating that their children and themselves are being put at risk by a system that doesn’t take their voices into account.

“Women have nowhere to turn.”

Mia continued: “Society has a role to play as well.

“On average a women will experience 35 incidents before calling the police.

“It is time we open our eyes.

“We can all help in reducing gender-based violence: this is not the responsibility of women alone.” 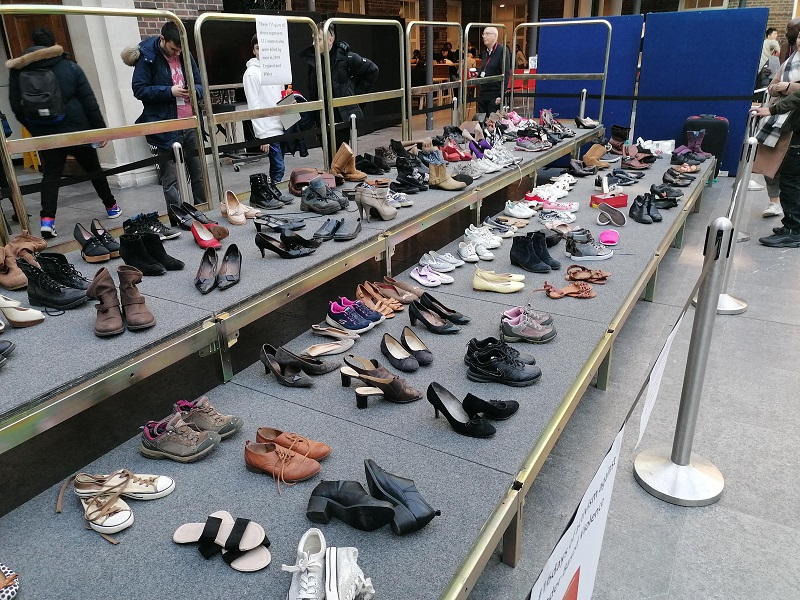 On the day, people were invited to leave clothes in the Quad for females at the local Solace Women’s Aid refuge and the appeal received an incredible response with more than a dozen packed bin bags donated.

A separate JustGiving page was created where people could give money to the refuge.

The Metropolitan Police Service had a stand with detectives from the local tri-borough force Safeguarding unit and special constables who could answer questions and provide information about help for domestic abuse and hate crime.

The event also featured emotive quotes from survivors of domestic violence taken from media reports and research by Mia Scally into victims’ experience of the family court system, but the quotes were hidden from being completely on display to the public in order to not upset people.

One survivor interviewed by Mia said: “I feel trapped by this horrible person and he seems to get sanctioned by the legal system to do so.”

Another victim who spoke to Mia said: “I can't really fully explain the effect he had on us all, he essentially turned us all into ghosts of ourselves because we were all walking on eggshells around him.”

"It's an event for the 111 women who have died in 2019 as a result of gender-based violence." @MiaScally, Lecturer in Forensic Criminology ❤️ Head over to the Quad today to view the installation and donate any unwanted clothes in support of the #16daysofactivism campaign 🙌 pic.twitter.com/gT6yKKBvgA

James Dowsett, a spokesman for the European Human Rights Advocacy Centre which is part of the Middlesex University School of Law, said that domestic and sexual violence are ‘key problems’ in the region and the centre was helping to develop strategies to combat this type of crime.

“For many, domestic and sexual violence is taboo, while access to redress may be inhibited by numerous barriers, such as the lack of any or sufficient protective mechanisms for victims and their families and ineffective investigations into claims of violence,” said James.

“Our strategic litigation, conducted along with regional partners, is intended to contribute to the implementation of robust, comprehensive frameworks to tackle violence against women across the region.”

As part of the campaign, UNiTE marked 16 Days of Activism against Gender-Based Violence between November 25 and December 10 last year.

The 16 Days of Activism initiative is run by the Center for Women's Global Leadership.

If you are experiencing violence or abuse of any kind, please do let someone know.