Call to other institutions to fire up their laser cutters: “If anyone has the capability to do it, we’re very happy to help them" 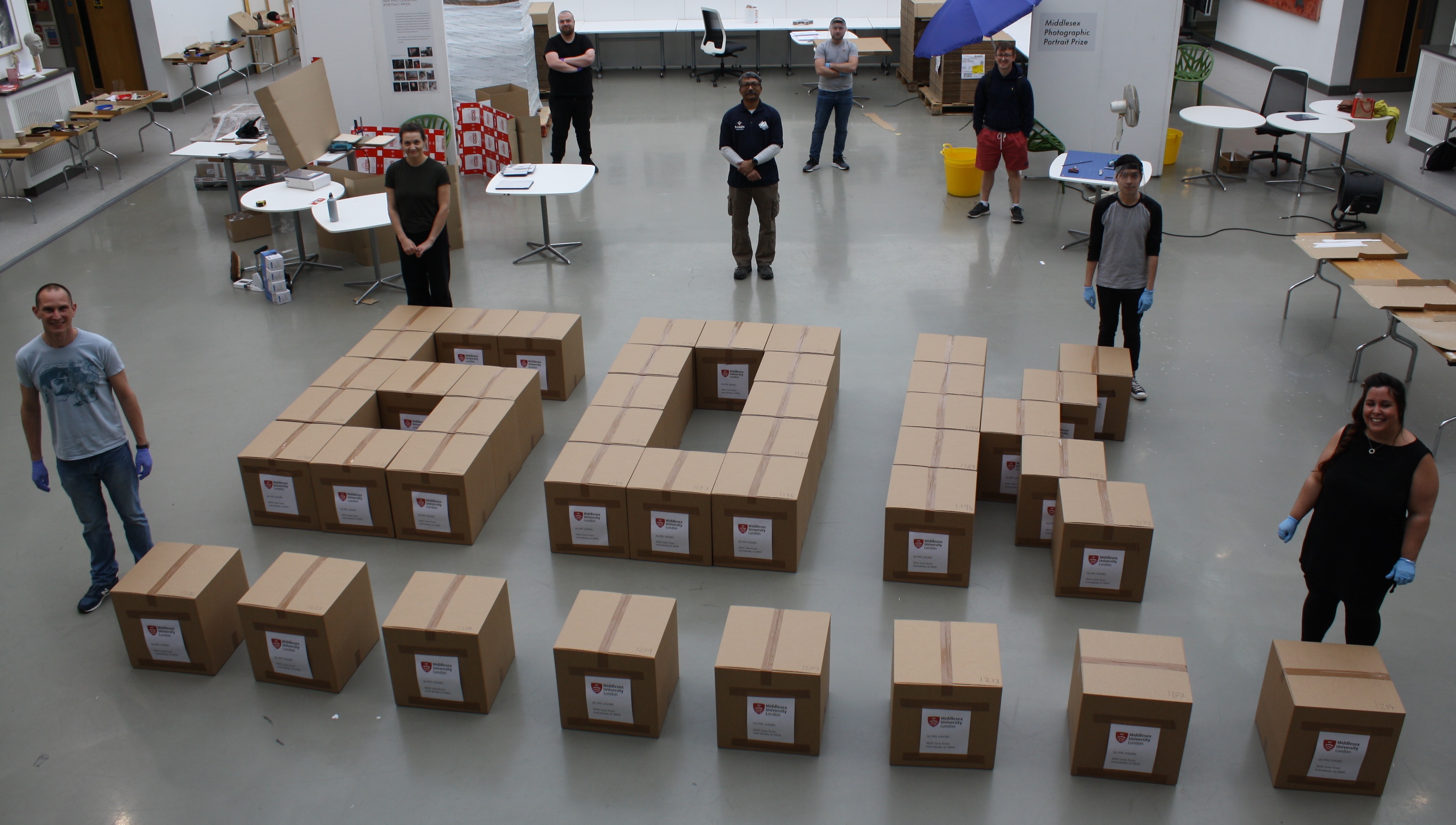 MDX staff have in just over six weeks produced more than 60,000 protective visors for NHS workers tackling coronavirus - and call for more organisations and makers to join in the nationwide visor-making drive.

The university has six laser cutters carving polypropylene visor headbands, enabling MDX to make more than 2,000 visors a day, over double the initially predicted number. The team, working nine hour shifts seven days a week on rotation, hit 30,000 visors on April 27th, 40,000 on May 2nd and 50,000 on May 7th, 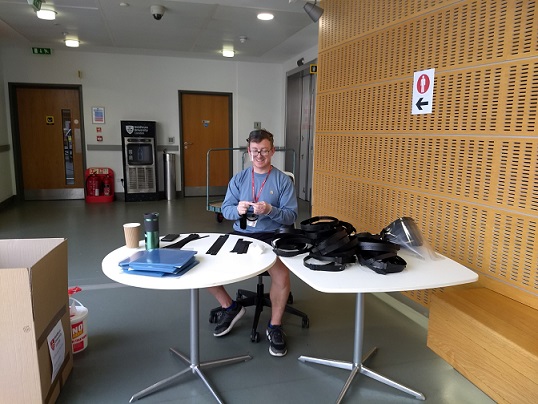 Thanking colleagues “without whom we couldn’t have done it,” technical tutor Nick says that they’ve had more people offer help than they could give tasks to, and have limited volunteers to people who can get to campus without using public transport. “We’re doing this on behalf of everyone at Middlesex” he added.

The first batch of 184 visors was sent to the Royal National Orthopaedic Hospital on 3rd April. After this the university stepped up to mass production. Every two days, the visors are picked up and sent either to NHS Gold Command in Enfield or directly to Trusts. Nick says they will keep making visors as long as there's a demand for them from NHS Trusts.

Around ten staff have volunteered their time to cut out, assemble and box up the visors. The visor is an open-source design by Sean Drummond, design engineer of Nottingham firm Kitronik, inspired by another visor design by Canadian artist and entrepreneur Noah Li-Leger. It uses the simplest technology – a headstrap and a plastic shield covering the eyes and face - so they can made very quickly when medical masks are in such short supply globally.

The production process is in three stages. One volunteer sets up a polypropylene sheet on the laser cutter, waits for it to cut out a sheet of headband parts, then takes it off the machine to clean all the smoke off with another person helping. 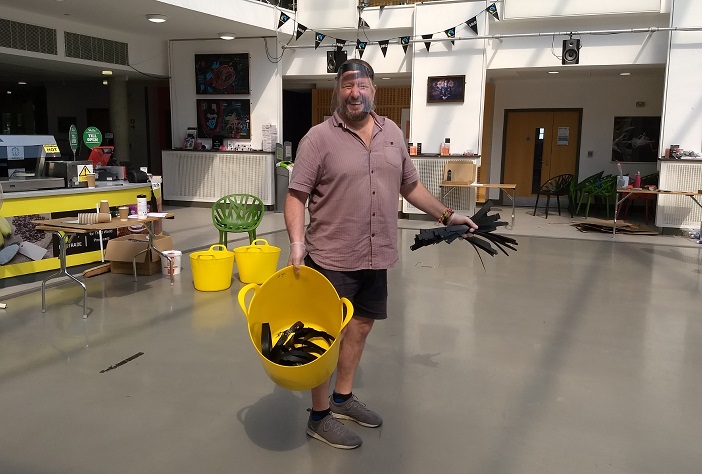 Another team assembles the headbands, punches holes in PVC sheets for the shield and fits the visors together. A third group puts them in boxes. As a personal touch, volunteers have been leaving a thank you message from everyone at Middlesex in each box.

Nick is keen to encourage any organisation with the necessary equipment to make visors themselves. MDX may be able to advise academic institutions and corporations on setting up production safely during lockdown. “If anyone has the capability to do it, we’re very happy to help them," Nick says. 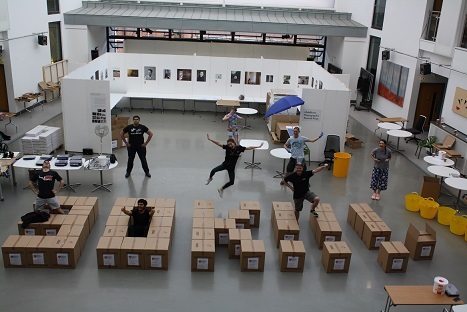 “It’s an incredible feeling to see someone organise something that will make a difference” says MDX Graduate Academic Assistant and robotics graduate Joana Miranda, who has been volunteering alongside supporting design engineering students with their learning online. “It’s humbling thinking of healthcare workers. We wear gloves the entire all day and sometimes my hands are tired, but this is a small part of the equipment they have to wear”.

“I am delighted with the resources being pulled together across the Faculties of Science and Technology and Arts and Creative Industries, to help address the need for face visors of NHS hospitals in the London area" says Head of Department of Design Engineering and Mathematics Professor Mehmet Karamanoglu. "The effort shown by my colleagues is just amazing. We are all working 9-hour shifts 7-days a week so that we can contribute to what is still desperately needed in the way of PPE". 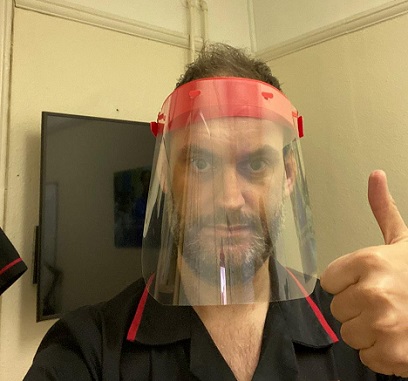 "RNOH would like to extend a huge thanks to @MiddlesexUni for producing visors for our staff to use as part of their essential PPE equipment" Royal National Orthopaedic Hospital Tweeted after their first delivery of visors, with an image of the hospital's Chief Nurse and Deputy CEO Paul Fish wearing one and giving a thumbs-up. "We are so grateful and also really impressed at how fast you guys can make them" added COO and Director of Strategy & Improvement Lucy Davies in a Tweet.

Chris Caldwell, director of Nursing HEE Covid Response, Health Education England said that he was "so pleased to hear about the success with Middlesex producing visors".