MDX Senior Lecturer in Creative Technology Debbie (Debora) Jedwab is one of the winners of an artwork competition for works inspired by the Hubble Space Telescope, to celebrate the 30th anniversary of Hubble's launch this year. 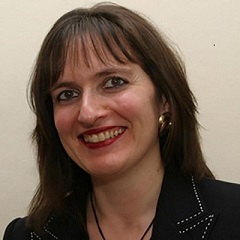 Debbie says she was determined not to waste time in lockdown and wanted to do something positive to combat feelings of isolation. She made two pieces, Intergalactic Planet and Beyond Imagination, as “a very visceral response” to Hubble using needle-felting with merino wool, synthetic wool and then hand embroidery embellishments.

She was surprised and delighted to see her work Tweeted by the Hubble account and showcased online among other winners last month. “I would have been happy with just one winning entry but I’m over the moon with two! I'm really pleased that something I made in my little studio ended up on their website,” she says.

She has “always been inspired by Hubble” – a collaboration between NASA and the European Space Agency which with its 1825lb, 94.5 inch diameter primary mirror relays crystal clear images which have transformed our understanding of astronomy. The galaxies and nebulae Hubble captures, Debbie says “are billions of times bigger than our planet, hundreds of millions of light years away from us. You can’t help but be excited by it”.

Time for our weekly pick of 4 favourite #Hubble30 submissions we received from you! https://t.co/yWttAMNLMk

She taught herself the needle-felting technique, usually used to make craft objects, during lockdown. 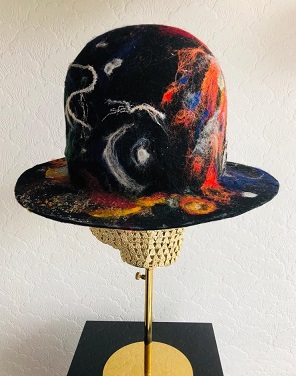 She's an established product designer, working in china and glass, and more recently has diversified into textiles following a foundation course at Morley College she took in 2017, facilitated by a MDX sabbatical. She has got “very into texture, depth and layering - needle-felting lends itself to that, you get subtle colours coming through, layer upon layer”.

Her Hubble designs have also been made into an Intergalactic Hat, in a collaboration between Debbie and former MDX lecturer Flora McLean (@houseoffloraofficial), now head of the Royal College of Art Accessories course.

Debbie suggests the project draws on a key skill of the creative technologist: thinking laterally around how to use technology to achieve an imaginative outcome.

ESA/Hubble put out a videocast to celebrate the 30 winning entries. Submissions included drawings, paintings, sculpture, music, poetry, a knitted toy and the design for a watch. The winners came from across Europe, Canada, Australia and the US.