Joe, who studied Fine Art at the university and is a talented painter, defeated Daniel Dubois

A Middlesex University lecturer who taught painter turned boxer Joe Joyce was celebrating after his former student won the biggest bout of his career at the weekend.

Steve Mumberson was among thousands of people tuning in to watch Joe Joyce fight Daniel Dubois on Saturday for the European, Commonwealth and British heavyweight titles.

Despite being the underdog, Joe boxed superbly with his jab and stopped his opponent in the 10th round.

After the fight Joe is being lined up for a world title shot and contest against the talented Ukraine fighter Oleksandr Usyk who he fought previously as an amateur.

“Making a painting or any other work of art demands a full commitment but can be easily lost in an idle moment. Art like boxing is unforgiving.” Steve Mumberson, Joe Joyce's former tutor

Steve, an Associate Professor in Fine Art Printmaking, said: "After odds of three to one against  and difficult at points for our former student during the fight, I was delighted to see him win.

"Hopefully this is the start of a greater national and international career for Joe.

"He is a real gentleman winner.

“Joe engaged fully as a student at Middlesex while applying his ability to his art through painting and continuing his training as a boxer."

It was during his time at Middlesex on its old Cat Hill campus in Cockfosters, north London, that Joe abandoned plans to become a triple jumper following an Achilles injury and switched to boxing where he has enjoyed incredible success – including a silver medal at the Rio Olympics in 2016 – and remains undefeated as a professional.

Steve was Joe’s tutor when he obtained a 2:1 BSc degree in Fine Arts from Middlesex University in 2009 and recalls the fighter having a distinctive style for expressive portraits of swords, snakes, celebrities and fellow boxers - he’s painted Muhammad Ali, Bruce Lee, Beyonce and even opponent Dubois. 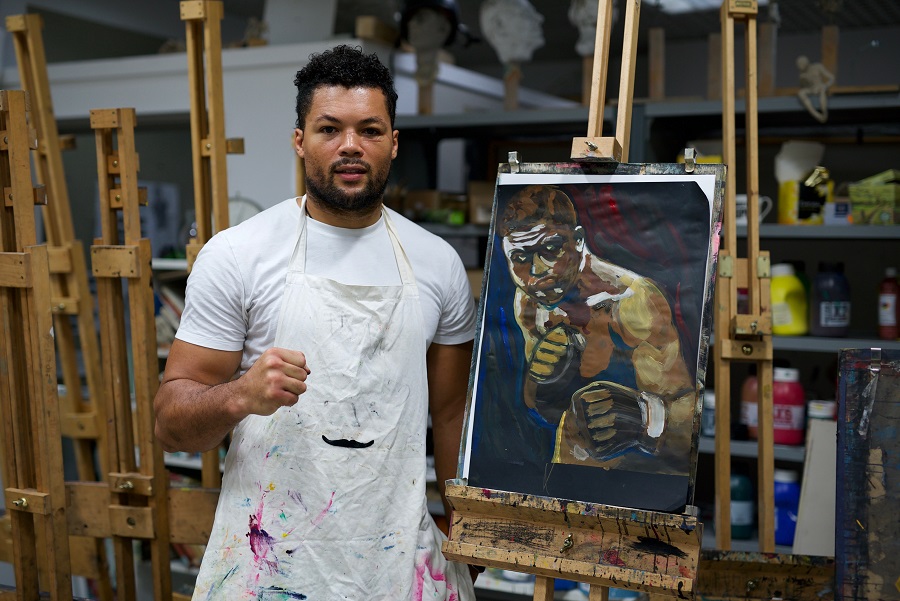 He said: “As from memory Joe was a very self-effacing young man who shared passions both in his early career in track events before a serious sport injury lead him to search for another sport which was boxing.

“His parallel interests in art, mainly developing the large painting works which started with symbolic images highly coloured works to the ongoing interest in portraits of himself as a boxer and the fighters he followed.

“Joe’s work was always at an ambitious scale, with figures painted within large colour interior spaces, very expressive but always within a figurative framework.

“He has continued to refine his approach and engagement with the history of boxing and the figures and individuals involved.”

While Joe is one of a few artists turned boxers, Steve said the skills needed for creating art are beneficial in the ring. 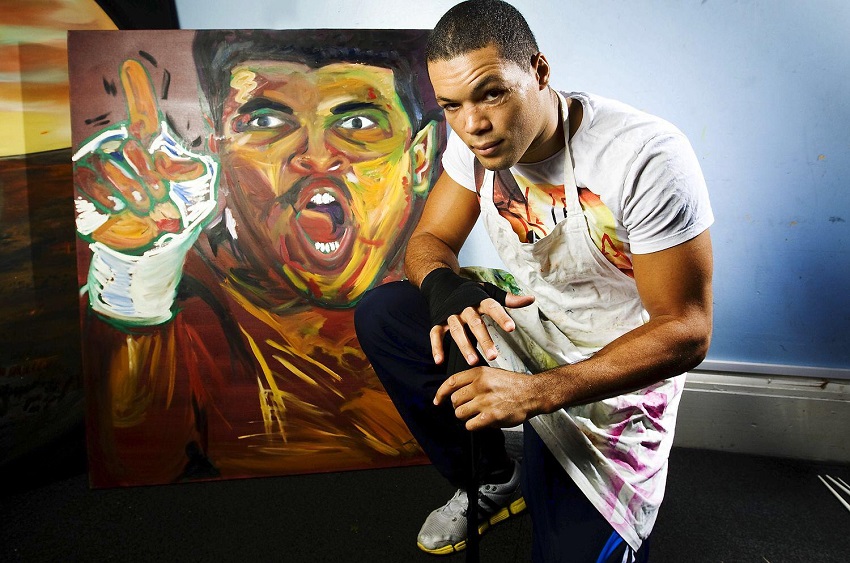 He said: “Boxing like many sports requires awareness and coordination, learnt by acquiring skills, attention to obscuration, full commitment and good ability to be self-critical and learn from those observations.

“From boxing history, the fighter who loses concentration, who is not a keen eyed observer of the other fighters’ every move will lose the fight within seconds.

“Making visual art requires the same heightened, visually aware eye for details and editing, knowing what is important and seeing several steps ahead.

“For if you don’t the art work can be lost in a moment, often completely.

“Making a painting or any other work of art demands a full commitment but can be easily lost in an idle moment.

In a break from intense training, Joe recently returned to Middlesex University’s main campus in Hendon, north London, to paint the legendary US boxer Joe Louis which took him less than an hour. 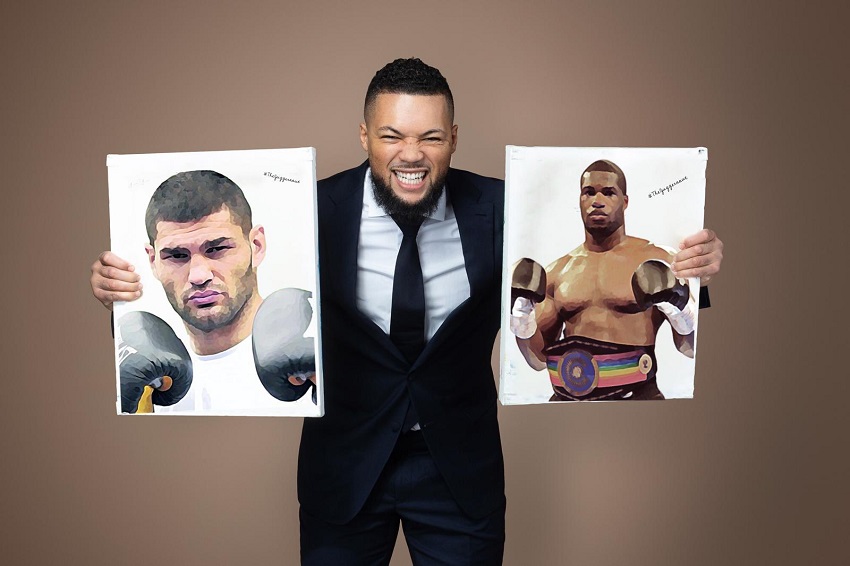 Joe’s love of art descends from his creative parents Philip and Marvel, his mum loved making pottery while his dad who would restore and guild antique frames taught him to paint aged seven.

Joe said: “It’s nice to paint, it’s one of those skills where you need repetition to build muscle memory, to practise to level up your skills.

“The more you box, the more you paint the better you become and I guess like riding a bike you never forget how to do it, but with practice you definitely improve.

After his career in the ring, Joe is considering studying for a Masters and potentially at Middlesex University but for now he’s focused solely on boxing.

Asked how he would defeat Dubois who has stopped all but one of his 15 opponents, Joe said: “Dubois is static on his feet and throws heavy punches, but needs to be set to do so and he’s had trouble with Richard Lartey, who wobbled him.

“He’s not had many really hard fights.

“Dubois is very strong but then I’m not sure he’s got one punch knockout power, if I’m going to be able to take his shots then he’s in trouble.

“I wouldn’t be fighting if I didn’t think I could beat him, it’s high risk, high reward.”

Find out more about studying Fine Art at Middlesex University.