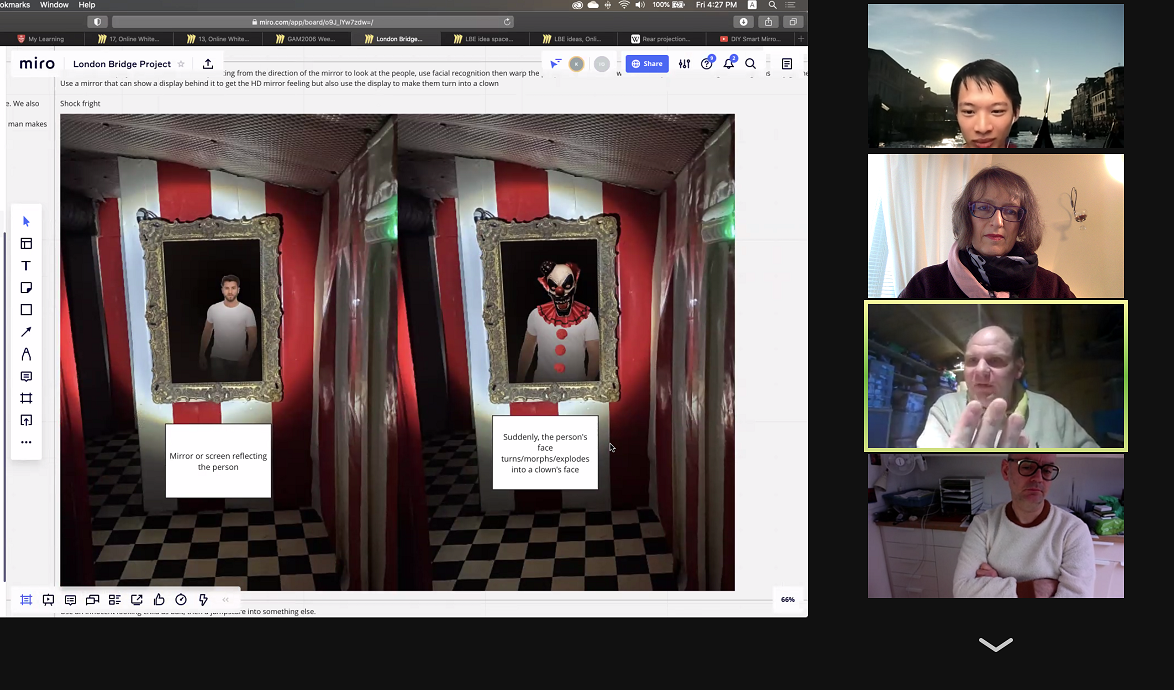 Senior Lecturer in Product Design Debbie Jedwab has spearheaded a collaboration with The London Bridge Experience - a past winner of the UK’s Scariest Attraction at the Scare Awards 11 years in a row. Located in vaults below London Bridge, the immersive attraction takes visitors through dramatic and gory highlights of 2000 years of London history and includes a horror experience annex.

The students in groups of twos and threes developed concepts for three different areas of the attraction – a history display, 'Ripper Street' and a “clown box" scare point – as part of their collaborative projects and creative technical practice module. They began by making sketches, an approach championed by Debbie, developed concepts through an ideation process and identified a few to go forward with for a final presentation to London Bridge Experience’s Managing Director, MDX alumnus James Kislingbury.

They had two sessions a week with tutors, using Zoom and collaboration tool Miro, and project management software Trello to communicate. The project was kicked off by thrill engineer, broadcaster and MDX Professor of Creative Industries Brendan Walker; and supervision has been by Debbie Jedwab; Senior Lecturer in Digital Arts Technologies, Magnus Moar; and other MDX Creative Technology staff.

“It was wonderful to see how groups came in with different ideas and concepts” says James, who explains he is seeking “the wow factor to create a new and different experience for visitors” for when the attraction reopens.

Approaches suggested in the students’ presentations included projection mapping with water coming through the walls, using handheld devices with QR codes and tracking to explore environments, augmented reality, and for the scare point a ghostly “fog screen”, a breaking glass effect and things popping out of the walls. 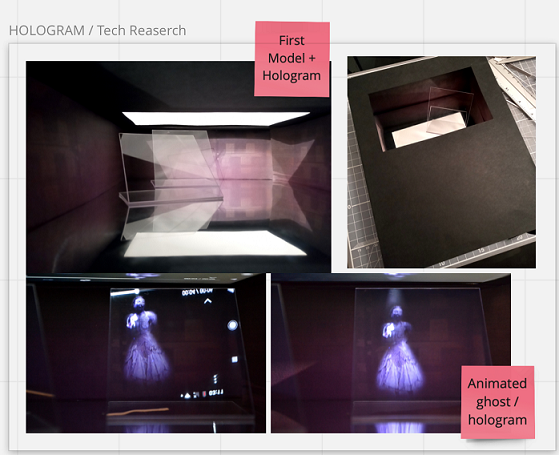 James, who studied BA Marketing and Management at MDX including a year as an exchange student at Bentley College in Boston said he was “very happy to be involved” on an MDX student-focused project, adding: "I like to give back if I can… It was as much me learning from [the students]". Elements from different student projects might be picked out for the eventual displays.

"The London Bridge Experience prides itself on delivering high quality scare entertainment for every guest that dares to wander through its dark and winding corridors" says Brendan Walker. "Every point of guest interaction, whether it's a mechanical, lighting or sound effect, needs to be designed, and delivered with the same precision, reliability, and repeatability as an automated industrial production line. It is this challenge in particular that makes this project such a great hands-on learning experience for all students, as well as opening doors for those who may wish to work in the entertainment industry in the future”.

“Learning how clients experience work, all that real world nous is of incalculable benefit to students”, says Magnus Moar. He adds that the commission is a good match for the Master’s course, “since we focus on interaction and designing the user experience, and a horror theme fits well with this".

“The programme has modules from both media and computer science. We recruit from a wide variety of backgrounds, from arts and science and tech backgrounds. When these [graduates] come together and work in groups, it provides a kind of synergy”. 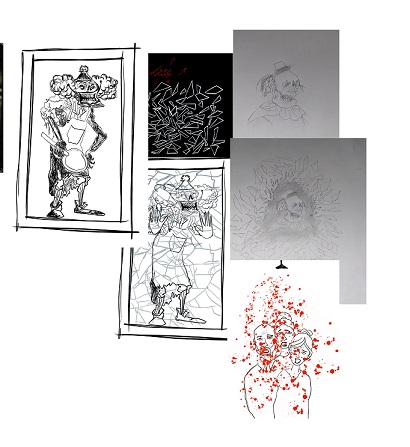 MDX PhD student and BA and MA Theatre Arts graduate, Natalie Tomlin, who specialises in stage effects and is supervised by Associate Professor in Contemporary Performance Josephine Machon and by Magnus, helped by giving a talk to the Master’s students.

Computer Engineering graduate Kelvin Yueng says that for the ‘Brownlowe Study,’ the introduction to the attraction, “my idea was people standing on London Bridge, fire coming from every side and burning up the bridge”.

Working in a pair with Isaac Olubajo, he worked up ideas using projection mapping – "really useful as it creates a more immersive experience” – and other technologies new to him, such as a translucent screen onto which images of people and ghosts are projected. The final stage involved creating a 4-5 minute video for the presentation to James. He describes this first-time experience of delivering a real world industry commission as nerve-wracking but exciting: Debbie “would push us to do our best,” he says.

Isaac shares Kelvin's enthusiasm - embarking on the project, "it felt fresh, it felt new and I was going to think about something creative" he says. Having not had such a strong programming background, he had thought he would leave that part of the work to Kelvin but found "I was so pulled into it that I had to do it, I got better at it".

A horror movie aficiando - "Insidious triology, The Conjuring I and II, Nightmare on Elm Street" are among his favourites - Isaac became fascinated with the art and science of what makes people scared. He describes Kelvin as an ideal project partner: "Disagreements didn't feel like disagreements. We were able to work on a very high level. He really complemented everything I had".

Nordic languages graduate Maria Demidchuk, also a horror fan, had the concept of the guide to the Experience, John Rennie, being "a really exhausted man who gives you goosebumps"; London Bridge is Falling Down being sung as a ditty which starts joyful and turns dark; and the illusion of a zombie-like figure running towards visitors. Her project partner Esther Bello was struck by the idea of a clown breaking glass, and developed this using graphics software Blender.

Paulina Szewczyk designed a scenario for the clown box where "motion sensors trigger optical illusions... from being trapped inside a clown’s guts, drowning in a pool filled with blood, to a gigantic three-dimensional clown’s head coming out of the floor and more".

Paulina says she boosted her "adaptability, flexibility, and resilience skills while studying during lockdown. Creativity is often born in a crisis - the new limited conditions force me to think in new ways and search for solutions where I have not looked for them before".

Yemi Efeovbokhan, who studied Business Information Systems for his Bachelor's, learned from Debbie the brainstorming technique SCAMPER and other mind-mapping approaches which he describes as "an easier way to understand what's going to work, what's not going to work". He now wants to develop the project further" beyond the ideas he submitted - "my interest has been piqued" he says.

MDX stood out for Maria from other international universities she looked at for offering plenty of practice, not just theory, in the Creative Technology programme, and for exploding the idea that you don't learn new ways of doing things after your Bachelor's. Kelvin says he’s learned as much in the past year as he did in the four years of his Bachelor’s – and got so much out because of the amount he put in.

Isaac is currently torn between becoming a user experience person and a creative technologist, "using technology to make beautiful attractions". Esther hopes to work either as a data scientist or in film production. Maria is interested in combining work in creative tech and music.

Yemi has discovered at MDX that his strength is in research. He aspires to launch a health tech start-up based around AI or Internet of Things, perhaps in the field of dementia care/assisted living.