Inspirational MDX athletes at an Olympic Games like no other

Cyrille Tchatchet says it was an "honour and a privilege" to be one of the Olympic flag-bearers, while Lutalo Muhammad is hailed as the breakout star of Olympic punditry 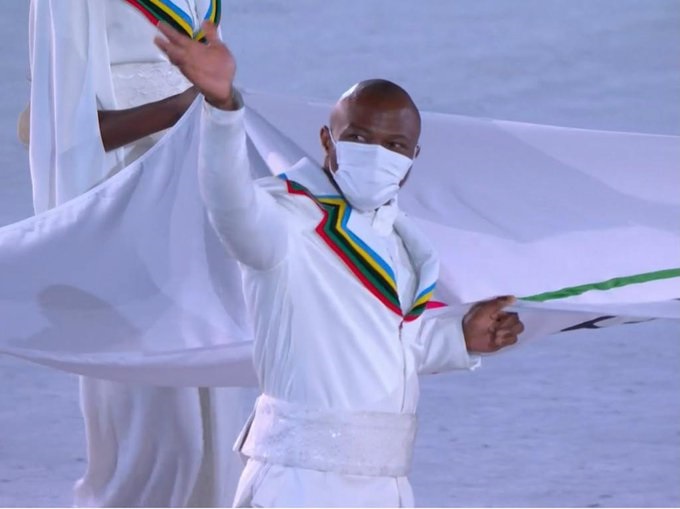 Three MDX alumni are taking part in the Tokyo Games, for Team GB and the Refugee Team, while a MDX Double Olympian has become a hit with sports professionals and the British public as a pundit. 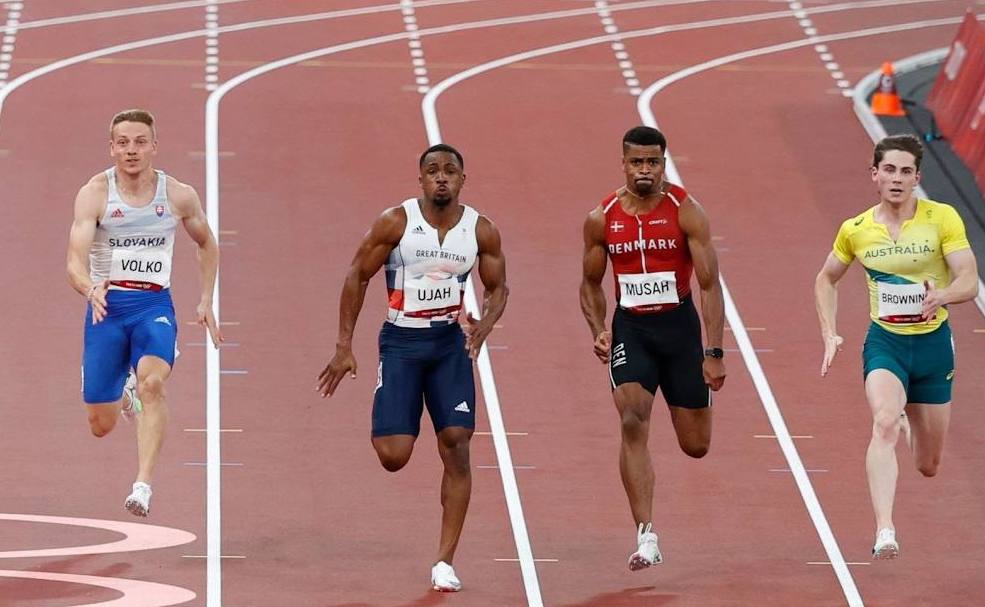 Cyrille was chosen as one of six athletes to carry the Olympic flag into the National Stadium at the opening ceremony on 23 July.

The athletes represented the five continents and the IOC Refugee Olympic Team. All are healthcare workers or have been volunteers and campaigners in the pandemic, sending a message of hope and solidarity in the world’s struggle against Covid-19.

Cyrille, who lives in Hendon and works as a physical health lead nurse in Harrow, told Eurosport, "I was over the moon. It was an honour and a privilege for me to march with the flag into the Olympic Stadium. It's been a very, very long journey".

Aged 19, Cyrille came to compete for Cameroon at the 2014 Commonwealth Games in Glasgow. Afraid to return home after it had been made clear to him in the Athlete's Village that he could not do so safely, he fled and slept rough in Brighton for two months, at one point contemplating suicide. He spent time in immigration removal centres in Dover and London; later, after being rehoused in Birmingham, he joined local weightlifting clubs and was soon competing again, first at regional, then national level.

"I think it sends quite a strong message to other people that might be thinking refugees are coming here to take other people's jobs or refugees are criminals, running away from things, which is not true," he told AFP. "So it will be good to show a good image of how important refugees can be for the country where they live".

At Tokyo International Forum on 31st July, "every lift Tchatchet attempted was greeted by cheers and applause from the team delegations, volunteers and fellow athletes, who are allowed into the arena," Reuters reported. When in the clean and jerk he succeeded on his third attempt at lifting 195kg, he held up the bar above his head longer than necessary, then stretched out his arms to acknowledge the applause, the report added. He finished second behind Olfides Saez Vera in Group B and tenth overall. 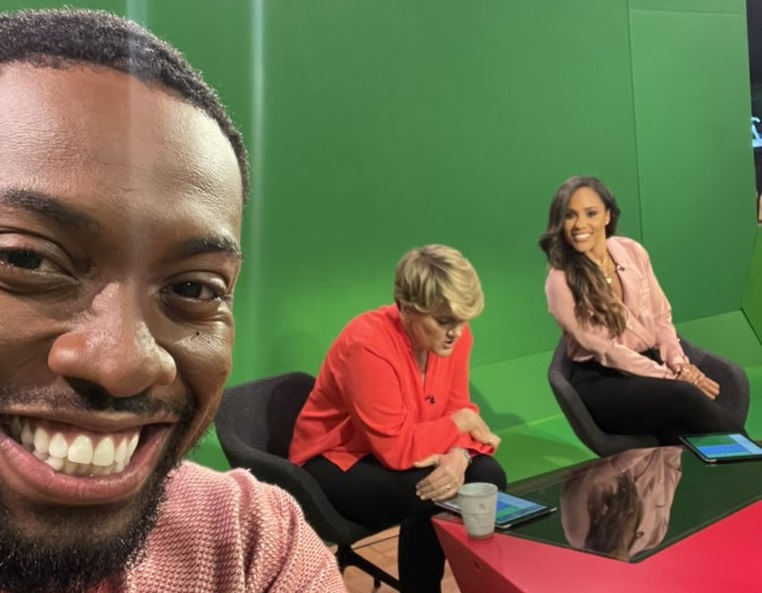 Meanwhile Sports Science alumnus Lutalo Muhammad, a taekwondo bronze medallist at the 2012 London Games and a silver medallist at Rio, delighted many viewers of the BBC's coverage of the taekwondo with his expert analysis of the bouts from MediaCityUK in Salford.

The Times reported that British women's tennis Number One Johanna Konta "absolutely loves" listening to Lutalo, calling him "the most positive and calmest voice on TV," while filmmaker and London 2012 presenter Leon Mann said he "has a real presence that is really hard to achieve".

Guardian sports writer and editor Sachin Nakrani praised Lutalo for "effortlessly mixing humour and passion... with explanations of taekwondo's nuances and rules" and for "a wonderful use of language".

Lutalo - who missed out on this Games through injury - says his fame as an explainer of the sport has been "surreal" and that the reaction of some of his more wildly besotted fans "feels like a massive blessing right now. It makes me feel very happy and proud that I was able to represent my sport well.”

But his dearest wish, he told The Telegraph, is to get back to competing again.

“Mentally, physically and spiritually, I’m the best I’ve ever felt and my body is in the right place to attack these next three years. I still feel like my best work in the taekwondo ring is ahead of me". 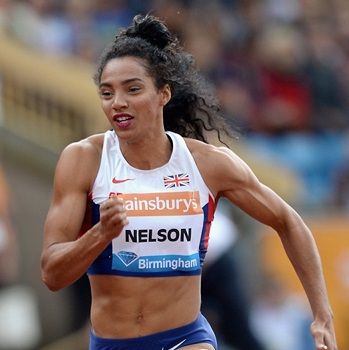 Ashleigh Nelson was at 17 the youngest member of the GB athletics squad in Beijing in 2008, although she didn’t race that time around, and she was in the 4x100m relay team at Rio in 2016. In 2014, she won 4x100m Gold at the European Championships in Zurich, and Bronze in the 100m at the same competition. She was in the silver medal-winning 4x100m relay team at the World Championships in Doha in 2019. “I’m so unbelievably proud to have been selected for my 3RD Olympic Games!” she told social media followers after hearing the news. “All glory to God and the amazing support network I have around me, they have been there through it all, this is OUR achievement.”

Chijindu (CJ) Ujah won Gold as part of the GB men’s relay team at the World Athletics Championships in 2017 while he was still an MDX student. In 2014, aged 19, he became the youngest Briton and only the fifth British athlete ever to run 100 metres in under 10 seconds. Currently ranked 11th in the world, CJ is the holder of three Senior, one U20 and one U17 national titles. He missed out on the 100 metre sprint finals at the 2016 Olympics by less than a hundredth of a second. Since graduating from MDX with a Sports Science degree, his successes include Gold in the 4x100 metre relay at the 2018 European Championships and winning the 100 metres at this year’s British Championships in a time of 10.05 seconds. “You’ve got to want more… I believe I can beat anyone and I just want to get on the line,” he told PORT magazine in 2017.

Cyrille Tchatchet has trained with MDX’s head of weightlifting Shyam Chavda for the past five years. Having gained asylum in the UK in 2016, Cyrille won a place in the IOC Refugee Team in June – only the second time the team has competed in an Olympics. Cyrille holds three Senior British weightlifting gold medals, five Senior English gold medals and three British University and Colleges Gold Medals. He was MDX Sportsman of the Year for four years from 2017-2020. “Being given the opportunity not just to compete but to represent a good cause means a lot to me," says Cyrille. "I will be honoured to represent not only refugees but all the estimated 80 million displaced people around the world".