Report is "a compelling picture that will likely drive debates for years to come": founder and publisher of Water & Music, Cherie Hu 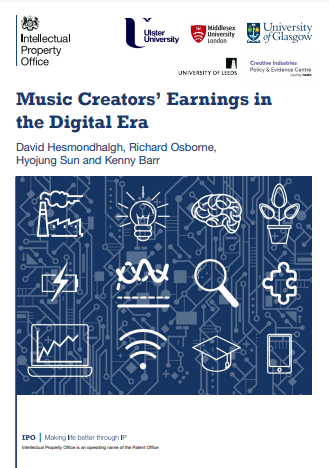 A MDX academic is joint lead investigator on a report for the Intellectual Property Office (IPO) that has been hailed by the DCMS as “the most comprehensive study of music creators’ earnings ever completed in the UK”.

The report collates the evidence on musicians’ earnings through streaming, and the proportions of revenues over the past 20 years that have gone to artists and lyricists compared to record companies and music publishers, to facilitate informed debate on a subject which elicits many strong opinions.

Their report, Music Creators’ Earnings in the Digital Era, also estimated one million UK streams a month as a rough threshold for earning a sustainable living from music, and found that some 720 UK artists may have achieved this level of earnings in 2020.

The research comes in the wake of the Department for Digital, Culture, Media and Sport Select Committee Inquiry backing comprehensive recorded music market reforms, and touches on a range of industry proposals for reallocating revenues, including revising contracts, other reversion rights, alternative methods of distributing streaming revenues and alternative ways of paying artists.

The researchers had unprecedented access to data from sources such as recording and publishing contracts, record company accounting data and information from the collecting society, PRS for Music, but point out there is much data still to obtain, including more information from streaming companies and financial information from rights holders.

Journalist and publisher of the Water & Music newsletter Cherie Hu, an authoritative voice on the music industry and tech, writes that "‘All in all, the UK IPO report presents a compelling picture that will likely drive debates about the future of artists’ careers for years to come"

Among the researchers’ other findings were:

- More music creators are competing for a share of the revenue than in the ‘pre-digital era’: 60,000 tracks are now uploaded to Spotify every day

- Artist and studio producer royalties from physical sales, plus in more recent times downloading and streaming, declined 41% in real terms from 2000-2019, and music publisher revenues 20%

In dialogue with the IPO and an Industry Steering Group of organisations representing artists, composers, publishers and record companies, the researchers developed a series of questions for music creators and industry stakeholders including the impact of changes in the digital music marketplace on creators’ earnings, the method of distributing royalty earnings creators, change over time of the distribution of earnings, and concentration of earnings. The DCMS Select Committee Inquiry also provided a huge range of information and perspectives.

Dr Osborne says: "We've gathered data that hasn't been available before. We've also put it together in a way that hasn't happened before - we've got as close as anybody has to mapping out the revenues of the music industry.

"Are there enough creators earning a decent amount of money, particularly in comparison with previous eras? This matters both for the songwriters themselves but also for the national music industry that we have".

Co-author Professor David Hesmondhalgh said: "We’re not aware of any previous study anywhere in the world that examines musicians’ earnings from a particular country in such detail.

"We offer no judgements in the report about fairness or otherwise, and we offer no solutions. Instead we seek to provide evidence to contribute to a more informed debate about musicians’ income. We suspect all different sides of the debate will find evidence to support their views."

Co-author Dr Hyojung Sun said: "The research started with the aim of informing the discussion by providing robust evidence in this highly polarised area of debate. This was achieved by working closely with the diverse stakeholders and the positive feedback so far received, highlights the need for such evidence.

"We hope this report helps to move the debate forward and plays a small part in support of the creator community".