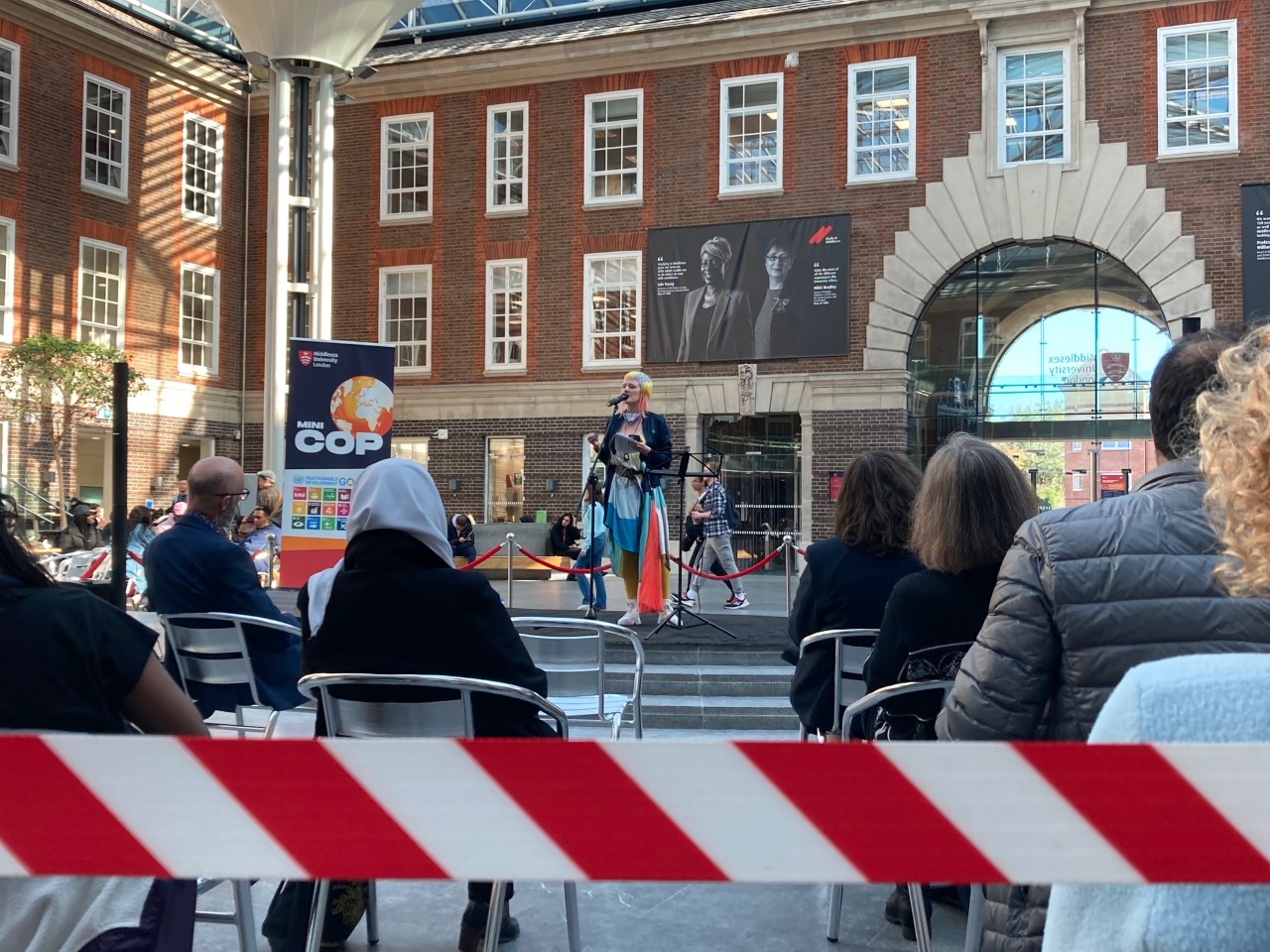 A founder of Extinction Rebellion gave a vivid warning about rich countries and companies “disembowling our mother Earth” and urged young people “to be as annoying and uncompromising as possible” on the issue of climate, at a MDX ‘mini-COP’ ahead of the start of the COP26 conference in Glasgow on Sunday. 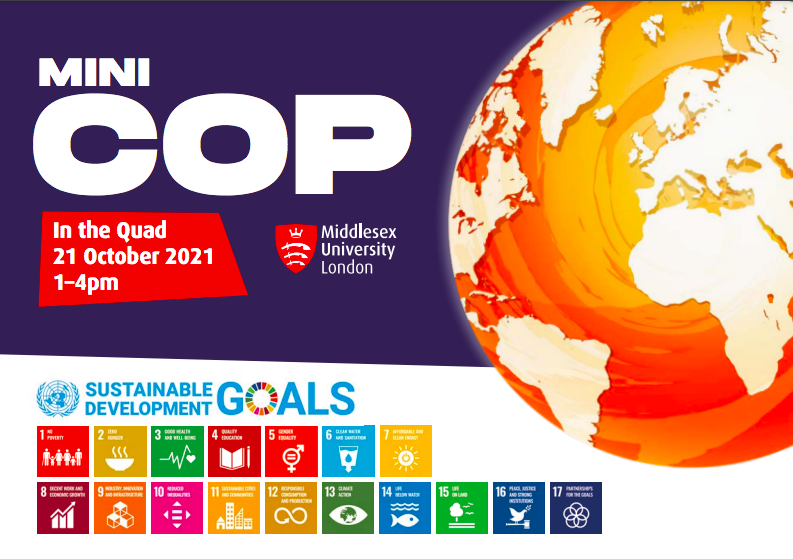 MDX staff and students and pupils from Friern Barnet School gathered in the Quad on Thursday 21st October to hear speakers and performers, and engage in debate about climate change and climate action.

Vice-Chancellor Nic Beech introduced the event as an opportunity for attendees to expand their understanding, ask some potentially uncomfortable questions, and translate “knowledge into action” afterwards. 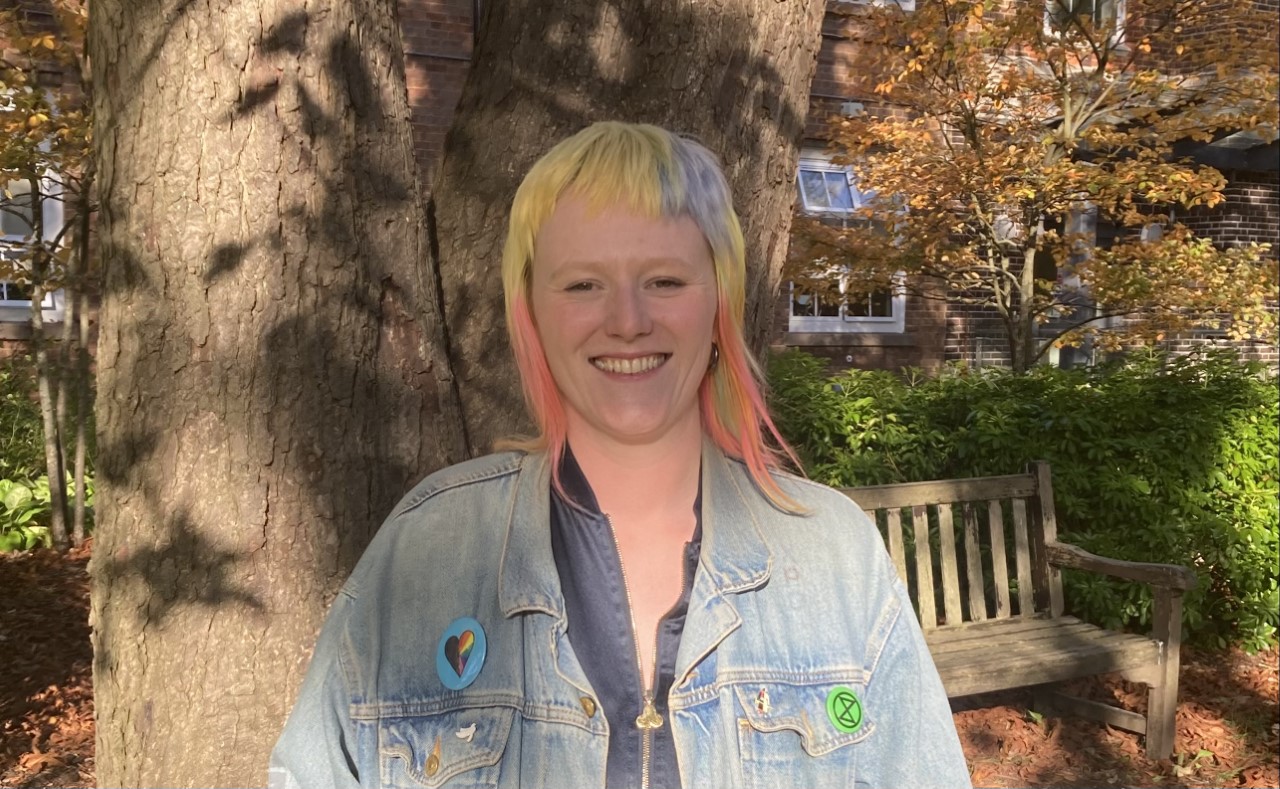 MDX Fashion alumna and Extinction Rebellion co-founder Clare Farrell argued that it is time to stop looking to the COP gatherings for a solution, calling it “a theatre of concern rather than a platform for global change”. She described the ‘wet bulb effect’ – conditions dangerous for humans where it is too hot and humid for sweat to evaporate – already taking hold in some parts of the world. She likened the behaviour of people in the West to “primitive children, who run around trashing the place,” while pinpointing “a wisdom in the young community that we disrespect very greatly in our culture”, and suggested that in universities, cross-disciplinary scholarship and collaboration are needed to tackle the crises facing the world. 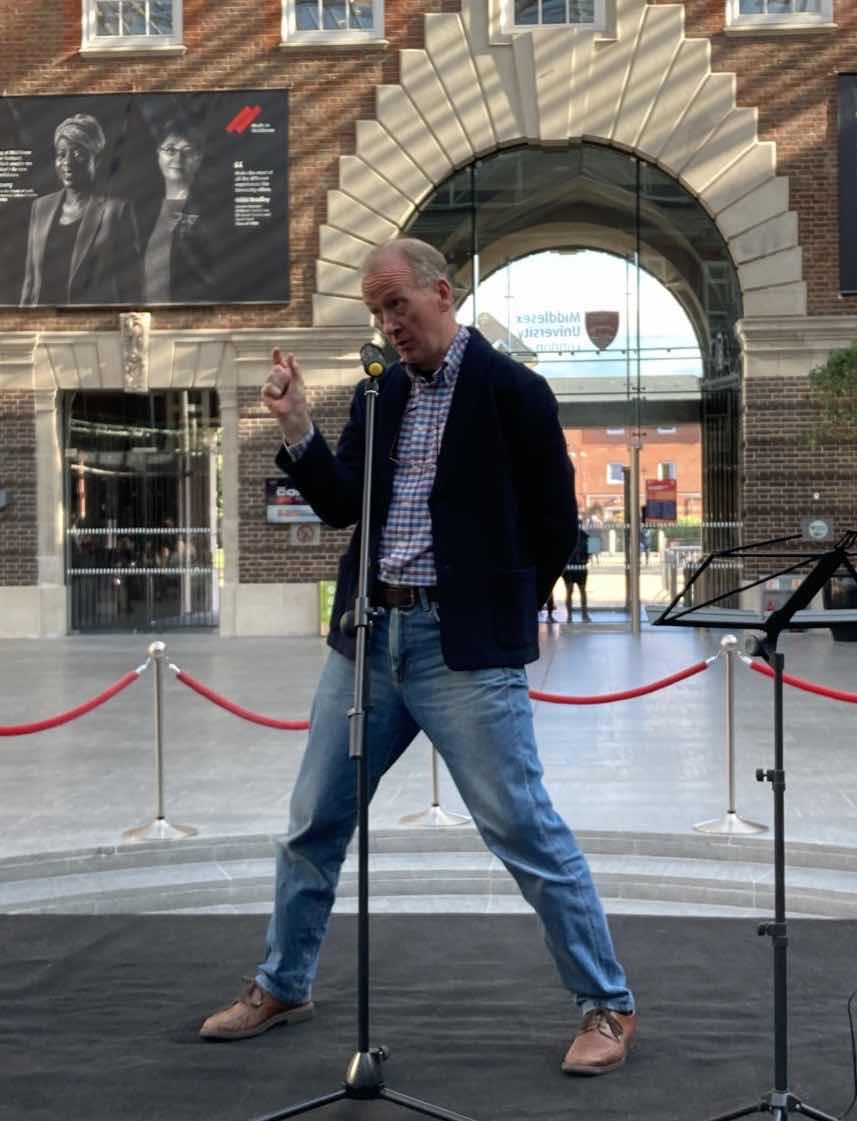 “Optimistic pessimist” Dermot Barnes, a founding member of Muswell Hill Sustainability Group and chair of local community not-for-profit n10ergy, said that Covid had shown that “if we really wanted to address the climate emergency we could,” but the failure to deliver poorer nations mitigation and adaptation support promised in Paris in 2015 suggested an agreement on NDCs (Nationally Determined Contributions) climate targets next month was very unlikely. He suggested food waste, meat-eating and throwaway fashion as three habits which we could be rethinking, and urged the audience to consider whether the lifestyles we have now are sustainable. 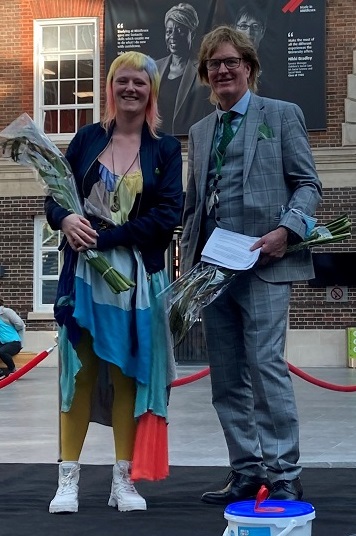 In a second address, Clare Farrell turned to pressures on the right to protest, and argued there had been a breakdown of the UK government’s accountability over issues such as the breaching of air pollution targets. Invoking a British radical tradition of being ‘unreasonable’ to achieve change, she said, “I can’t let this happen without knowing that I’ve done as much as I possibly can to obstruct what’s taking place in my lifetime”.

Questions and contributions from the audience, which came equally from pupils, students and MDX staff, included whether we can trust politicians, or if politics is a ‘corrupt industry’; how to get people to realise the scale of the issue of climate change; what the consequences of an “ecocide” law, even if it was voted in, would be for the state; and how much of the opposition to Extinction Rebellion Clare has encountered has come from the general public.

MDX Environment and Development student Kathryn Adams, who has been supported by Barnet youth communications charity Exposure, recited a poem she had written. Professional violinist Salar Asid, who has contributed to more than 60 albums, and played on Disney's 2019 live action Aladdin, enchanted the Quad with four pieces including one of his own composition. Videos from the UK and Italian government-backed Youth4Climate initiative were screened in the final section of the event.

Senior Lecturer in Eco-Entrepreneurship Chris Moon, who organised the mini-COP, said he had been “incredibly impressed with all the comments and questions, not least of all from our visiting school, it’s been fantastic”. Revealing that he was wearing a suit and shirt made out of recycled bottles, he ended on a resolutely positive note: that in spite of time running so low to tackle climate change, there are so many creative things we can do in response.