McLean's portraits of members of his support bubble, likened to the work of Richard Avedon, are on display at Shoreditch gallery

Friday 3rd December was International Day of Persons with Disabilities, which had a theme this year of leadership and participation of people with disabilities towards an inclusive, accessible and sustainable post-Covid world. To mark the day, we spoke to MDX alumnus photographer Dexter McLean about his experience of an inclusive studying environment at MDX, mission to challenge stereotypes around disability, and amazing and inspiring photographic work 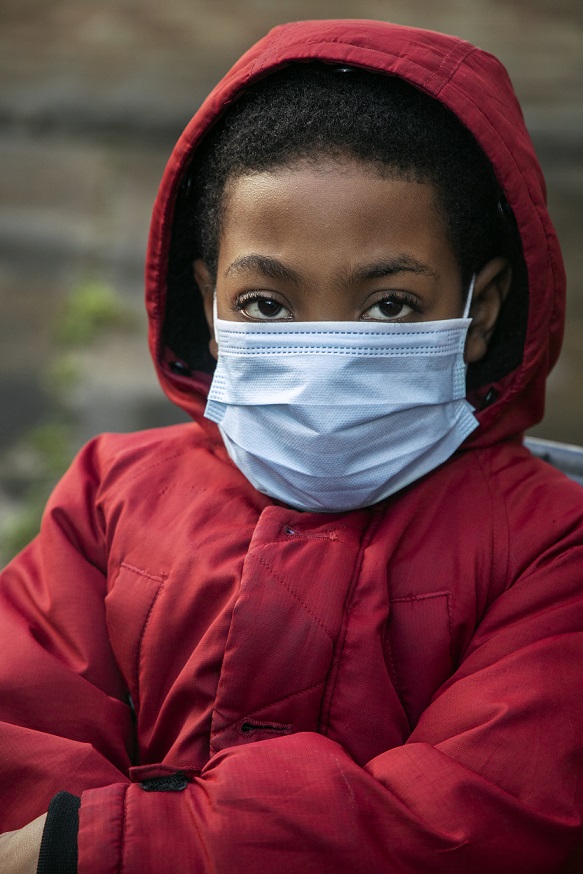 Striking portraits of close friends and family of Dexter McLean, wearing face masks and looking straight at the camera, are on display along with works responding to the pandemic by nine other photographers at Autograph's Rivington Place gallery until February 2022.

Dexter is one of seven disabled, neurodiverse and barrier-facing artists which Shape Art's Transforming Leadership Project, in partnership with photographic arts agency and charity Autograph, is supporting over two years to break down barriers in the arts with radical approaches, cultural ideas and business strategies. 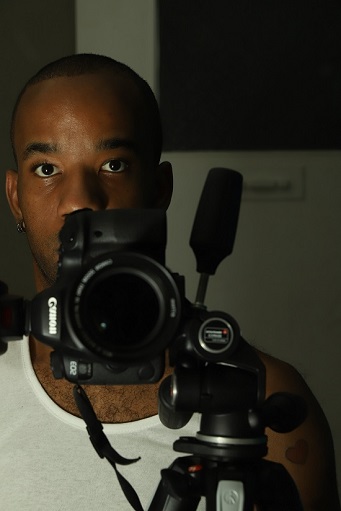 Diagnosed with cerebral palsy as a child in Jamaica, Dexter came to the UK aged 9 and became the first person in his family to go to university when he started at MDX. He first earned a BA and graduated from the Photography MA with Distinction in 2020. In 2016, he was shortlisted for the highly prestigious Taylor Wessing Photographic Portrait Prize at the National Portrait Gallery.

His work - operating "in a space between documentary and portraiture" - is particularly concerned with the representation of disabled and black people, addressing what he believes is mainstream media's failure to portray the lives of disabled people holistically and its lack of attention to the stories of people born disabled. He aims "to create change, to address the lack of diverse imagery... and to inspire young – especially disabled, and Black – people to also follow their dreams, to believe in themselves, regardless of their background or ability."

"Photography changed me and opened my mind to new things, and new ways of working together, new possibilities," he told Director of Autograph Mark Sealy in an interview to accompany the current exhibition.

About his experience at MDX, Dexter says: "I was a little bit nervous in my first year, but in the second year I think my feet were firmly on the ground. I could really talk to the tutors and technicians about my problems, they were like friends to me who genuinely wanted to see me succeed. That is the honest truth.

"Every idea I had I was able to actualise in the studio without any problems around accessibility. When we used to go on trips to London, [the tutors] would make sure the building had disabled access.

"One of my greatest memories was the photography trip to Portugal. It was electric to see so many people in a different scene. It was one of the best trips I have ever been on. I had so much fun.

"MDX gave me the opportunity to explore different avenues of photography I may not have had the chance to, working on my own. For example I was able to reach out to my disabled secondary school and invite young people into the photography studio for a professional shoot.

"[I had] a safe space to experiment. I had the space and time to visit a gym for disabled athletes and try my hand at action shots. I carried out a nude self portrait series in my third year. Opportunities like this were key to me developing my own style". 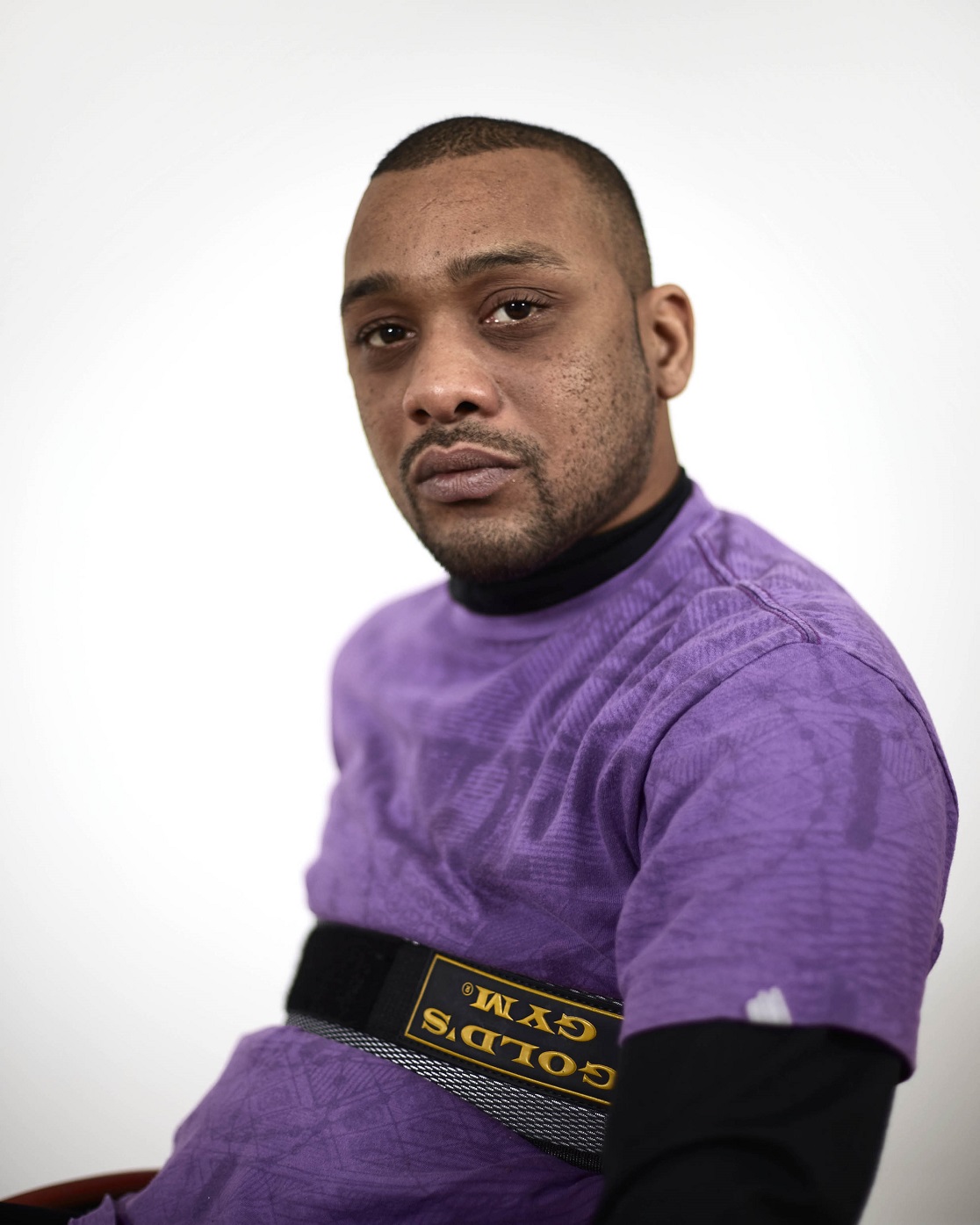 One of Dexter's photography projects has as its subject members of the Aspire gym in Stanmore: a place where disabled athletes come to develop their skills and build confidence but also a social hub for them to bond over their love of sport.

The series sets out to portray the physical and mental strength and dignity of players in the wheelchair rugby team, some of them looking up and out of the frame like heroic figures in classical art. The inspiration came from Dexter's own passion for sport at the specialist school he attended, before he chose photography.

"I was expecting to be a part of the 2012 Paralympics," he says. "I was put forward by my secondary school Paralympics group to be part of the club throwing team". There was a donor who was going to fund him while he was still at the "incredible" school - but when he went on to college he stopped receiving this support, "so I had to let that dream go".

"In the media, Paralympics often crop up, but [Paralympians] aren't presented as 'normal' but superhuman," reflects Dexter. In the Aspire Gym images, "I tried to humanise the average disabled person who would go to the gym to keep fit, just like your average able bodied Joe". 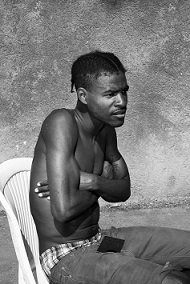 Other projects by Dexter include black and white portraits of members of the community in Olympic Gardens, a western suburb of Kingston, Jamaica where he grew up; portraits of Jamaicans in London; and meditations on the relationship between photography and philosophy, capturing "what might be described as 'sublime' aspects of the natural world," some to illustrate essays on the web platform phlexiblephilosophy.com.

The pandemic period "hasn't been that bad" says Dexter, as he was absorbed with the Autograph project. "The biggest challenge has been the lack of people available to me to shoot.

"I have a vision and direction," he adds. "In 2022, I am going to continue to try and change perceptions of disabled people - we can do anything that we want".

"In the series Untitled (2020)... [the subjects'] masks leave little of the face to discern except a ‘forced’ close-up encounter with the eyes. The viewer has no choice but to return the confrontation of the sitters’ gaze" writes photographer and educator Dave Lewis in response to McLean's Autograph commission. "This device references one of McLean’s key influences, the late American photographer Richard Avedon who would ask his subjects to stare for long periods of time at the camera lens before taking his split-second exposures".

"As an artist with cerebral palsy, McLean understands what it means to live with barriers, to be locked out of dialogue and isolated in society. So, while we collectively await a return to our pre-Covid-19 ‘normal’, McLean through the production of this series wants us to reflect on the resonances of what defines ‘normal’, how this ideology is metered out, and by whom and for what purpose?" 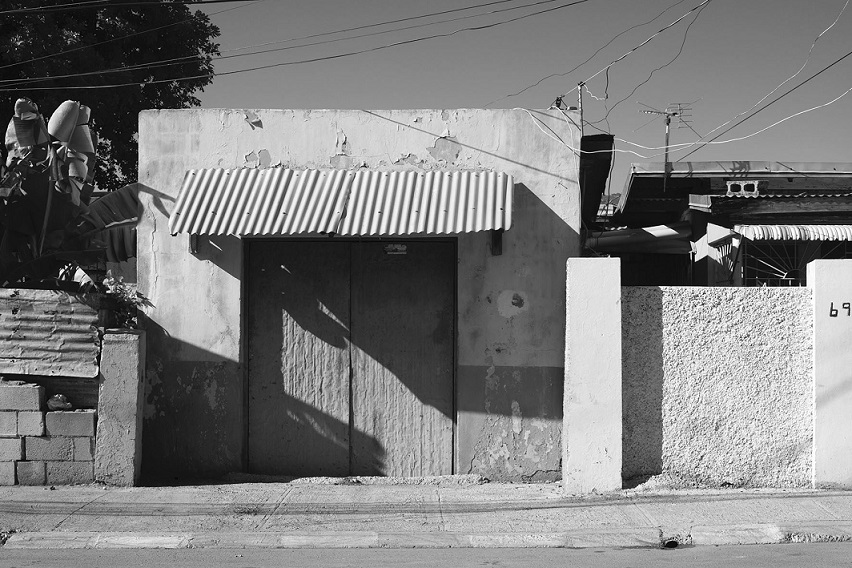 "Despite the additional struggles that come with being a disabled student, Dexter has always found a way to push through and persevere. Watching him grow and become the success that he is, has been inspiring. Not because of his disability, but because of his strength, values and tenacious pursuit of social change."

Care | Contagion | Community — Self & Other is on at Autograph gallery, Rivington Place EC2A 3BA until 12th February. Book tickets here