MDX Vice-Chancellor finally gets to celebrate his inauguration

A celebration event at Middlesex University marked the inauguration of Vice Chancellor Professor Nic Beech more than two years after he first joined.

Prof Beech was officially inaugurated on Tuesday at the Hendon campus in North London in front of staff and civic dignitaries.

He started his role just six weeks before the outbreak of Covid-19 stopped face-to-face teaching and due to the pandemic the University has been unable to stage an inauguration for Prof Beech for most of this two-year period. 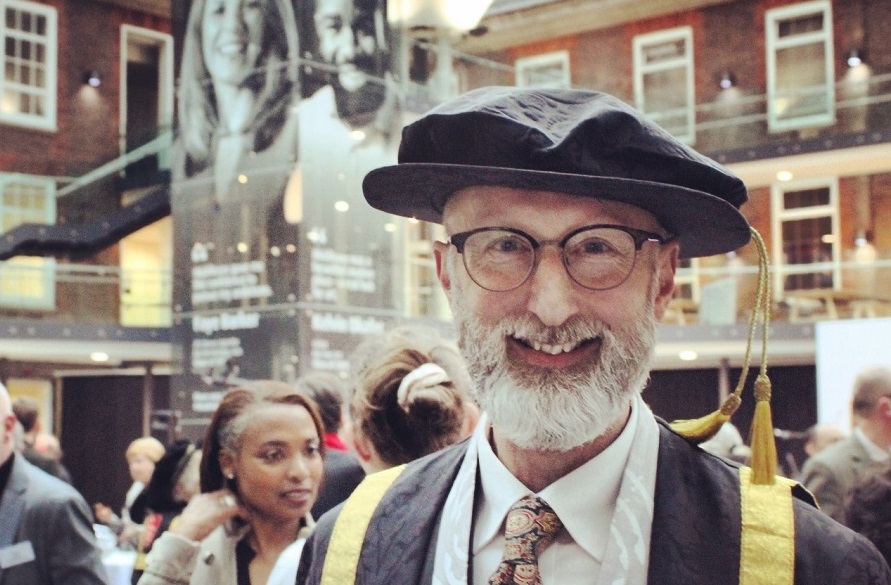 “It has been a time of incredible change,” Prof Beech, (pictured above) said at his inauguration.

“For our University community, and for all universities, we’ve been pushed out of our comfort zones. Changes in the last few years have resulted in us all crossing boundaries, adapting to new ways of learning, working, communicating and living.  I’m so proud that we have faced these changes as a connected global community. It is this connection that has enabled us not just to survive, but to thrive.”

Prof Beech reflected on MDX achievements over the last two years including how staff trained more than 3,000 people to carry out Covid-19 vaccinations and how staff and students designed more than 60,000 visors for NHS staff at the start of the pandemic. 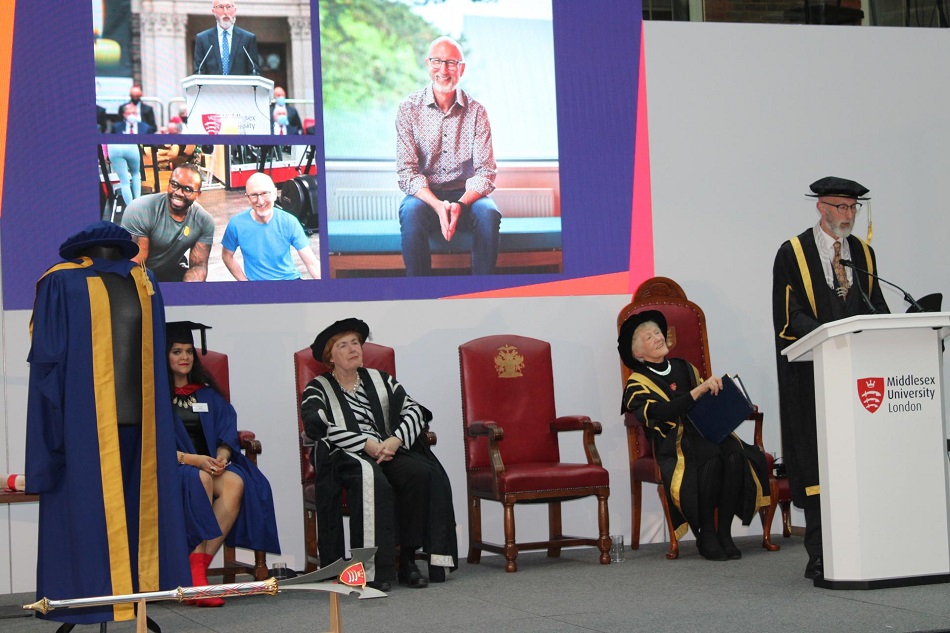 His speech also highlighted academic and research successes such as how pioneering lung function technology, originally designed for babies, is being trialled to monitor Covid-19 patients and how another MDX-led project is looking at the potential of using wastewater as an early warning system for Covid-19 infection.

Reflecting on his career, Prof Beech revealed he had been the first in his family to attend university and praised his dad who was accountant but retrained as an academic and achieved a PhD in his 50s.

“My dad was an inspirational figure in my life and is someone I am still trying to live up to,” he said.

Prof Beech has extensive research and leadership experience and was previously a Vice-Principal at the University of Dundee and he spoke passionately about the “transformative” effect education can have on people’s lives.

He knew before joining MDX “that Middlesex places inclusivity and diversity at its heart” which he added “aligns with my own commitment and is really important to me”.

Looking ahead, Prof Beech spoke about how MDX will be opening a new West Stand development with the Saracens, and that the University’s new strategy will have a triple focus on education, engagement and research and boast a “truly international and inclusive outlook”.

Concluding his speech, Prof Beech said: “We have achieved a huge amount, but none of this would have been possible without people having the appetite to do something new – whether starting a university as a new student, undertaking a new research project, exploring a new collaboration, or starting a role like mine, as Vice-Chancellor of this university.”

The inauguration featured MDX dance students who performed the 'birth' which was choreographed by Leroy Dias Dos Santos to sound and music by David Llewellyn.

The event also launched the new Middlesex Medal award which, as part of the new Strategy 2031, recognises outstanding contributions of people in our community which align to MDX values. 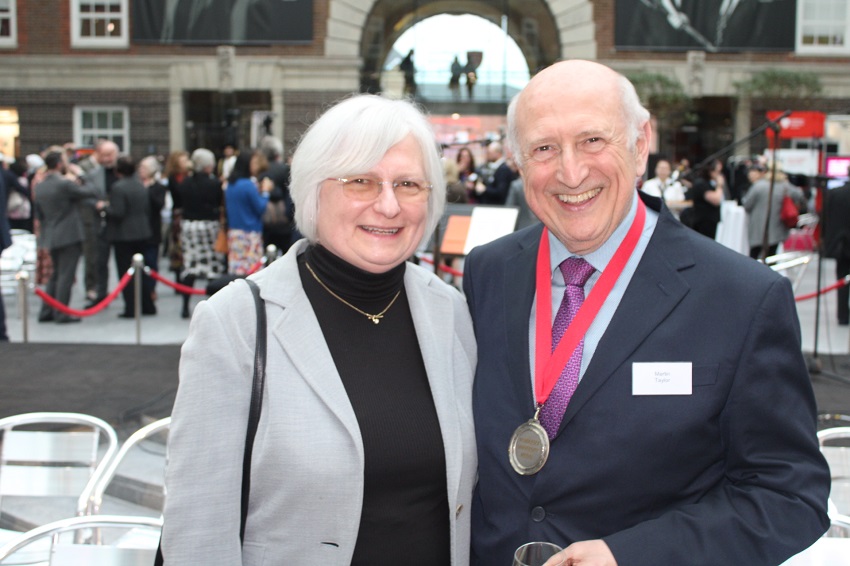 The first Middlesex Medal was awarded to Martin Taylor (pictured above with his wife Sylvia) for his “tireless work” since 2012 as a member of the MDX Board of Governors and as Director of Middlesex International (Mauritius) Ltd.

It also acknowledges his “outstanding” work as Chairperson of Befrienders Worldwide, a charity that helps people who are considering suicide, and as a Chairperson of Infinity Health, a digital platform for health and social care staff.

“You would think with all these commitments that Martin would struggle to find time for Middlesex but nothing could be further from the truth,” said Middlesex University Chancellor Dame Janet Ritterman, who praised his “compassion and generosity of spirit”.

Mr Taylor spoke of his long association with MDX having grown up in North London, and how his wife and sister trained as teachers at Trent Park College, formerly part of the University, where his mother was also a secretary of the students’ union for 20 years. 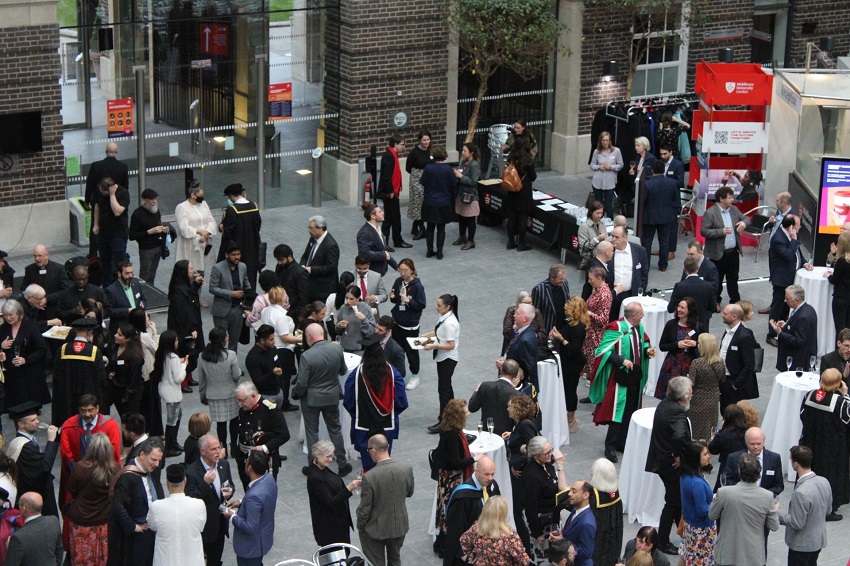 Speaking about the Middlesex Medal, Mr Taylor described the accolade as an “honour”, and congratulated Prof Beech on his inauguration.

“In spite of the challenges over the past two years Prof Beech has succeeded to lead an inclusive process in the development of the new exciting and inspiring strategy to guide the University through the next 10 years,” he said.