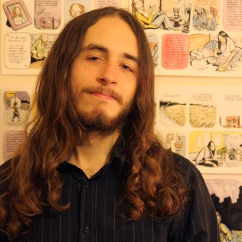 I chose Middlesex University mainly because of the quality of the BA Illustration course. The degree programme seemed to be exactly what I was looking for compared to what other Universities were offering as most courses just seemed to focus on the fine art aspect while Middlesex was very much about illustration and how to actually draw.

At Middlesex all of the tutors were actual illustrators so they really knew what they were talking about. We also had life drawing lessons every week which you don't get at a lot of universities so the course really provided exactly what I wanted.

Drawing was always what I'd wanted to do for as long as I can remember. I had my mind set on a degree in illustration but it is not that common a course, compared to say Graphic Design or Fine Art.

What I was looking for from a degree was a course which actually taught me how to draw, how to technically put what I was looking at down on paper – and that is what I got at Middlesex. I wanted to learn a more diverse range of disciplines within illustration and the degree helped encourage me to broaden the things I was doing, as well as teaching me how to draw.

The number one aspect of the course for me was the life drawing lessons. That was where I learned the most, particularly because we had such a great life drawing lecturer. He really taught us how to do it and took us through the steps of what to do.

My experience up to that point at school and college was that teachers hadn't really wanted to teach you technique; it was more about studying other artists and movements. At Middlesex it was about how you actually got it down on paper and I really enjoyed that. But I learned a lot from all of the other areas of the course too…

Probably my fondest memory was creating my final major project, because everything had been building to that point and it was such a step up from what I'd been doing up until then. My tutor really pressured me to produce something beyond anything I'd ever done before and it was quite a turning point for me because it was the first time that I'd produced anything that was approaching a professional standard.

The course taught me the practical skills that I have today. The University taught us how to use different materials and gave me the skills I needed to become a professional illustrator.

From the age of about 13 I started drawing and it went from there really. It was the one thing I really enjoyed and I seemed to be quite good at it so initially I was interested in illustrating books and then later graphic novels.

Pros: It is incredibly enjoyable if you are into it and it is really gratifying being able to create something and have something year after year that you can say 'I made that'. I can look back through my work and go 'in 2012 I illustrated this book, in 2011 I produced that graphic novel…'

Cons: The business side of it. Unless you get a lucky break it's extremely hard to get yourself out there, especially as it is such a changing industry now with the internet and everything. You used to have to go around all the different publishers and show your portfolio to people, but now you don't really do that. At the same time, you can't just email your online portfolio to people because they probably won't open the email or click the link, so you have to work out how to do it. You may not make any money for a long time, but if you do really well you can make a lot of money.

What are you working on at the moment?

Currently I am really focussing on publishing my debut graphic novel Breaker's End. I have illustrated for magazines and I also get a lot of personal commissions, often from people looking for fan art. I have had a lot of interest from publishers who want to work with me but I just need to hone what I am producing to make it more 'sellable'. I'm also doing short comics for a couple of clients, including the University of Leeds.

You won the Cape Graphic Short Story award in 2012. How did that happen?

The key to success, I think, was that it was the fourth time I'd entered, so it came down to sheer persistence. If you have persistence you can do anything!

I just kept writing comics and drawing comics until I had something that was good enough to win. I've been doing it for around ten years now so I guess eventually I'd made something good enough.

Winning the Cape award would be my highlight to date. I'm still working on getting my first book published and it's a big thing to do – that is my big project at the moment.

With any luck I will get a full-length graphic novel of my own published and begin earning a living from it. But I will be happy doing anything as long as it's drawing. I just want to build a career around that, with graphic novels at the top of the list.

What are your favourite graphic novels?

My number one, and the one that set me off, is Blankets by Craig Thompson – a 600 page graphic novel drawn in black and white. It's an autobiographical thing about a teenage romance with a bit of religion in it. Jimmy Corrigan by Chris Ware is also a big one for me, it is just so ridiculously good that you can't help but be awed by it. Will Eisner has also been a big influence on me and my style of drawing.

Number one: Be persistent. For some people it does happen straight away but basically if you want to make it you can't just expect that to happen overnight, you have to be persistent. You have to just keep going and going until you break through and your work reaches that professional level or you make the contacts you need to break in to the industry.

Two: Draw from life. Carry a sketch book with you everywhere you go and draw everything you see because that's the only way you learn how to draw new things.

Three: Get your projects in on time. Don't leave everything until the last minute; try to learn a good work ethic from the beginning. You have to plan and research what you are doing if you want it to look good, you can't just do it last minute and expect it be any good.

I'd probably say stop doubting yourself so much. Creative people especially always doubt themselves so you need to stop self-scrutinising so much and obsessing over every line. Just do it and let other people be the judges.