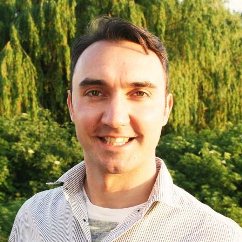 The course looked good and I had heard great things about some of the graduates.

I grew up in Norwich and London seemed more exciting.

Getting short-listed for a D&AD award and attending the New Blood Exhibition.

My tutor Andy Gossett. I did struggle to take some of his criticism towards my work while I was at university but looking back I think he helped me the most.

Make the most out of university life as it won't last forever. Just make sure you pull your socks half way up for the second year and all the way up for the third year.

Where has your professional life taken you since graduation?

Since graduating from Middlesex I have had a very successful career. Much helped by the success of my 2.1 result and the D&AD award I won while I was a student at Middlesex University.

In the first year after graduation I freelanced making music videos for various bands such as 16Bit, The Lost Levels and Magnet Man. I received thousands of hits on YouTube and even had one of my videos broadcast on television. At the same time I worked on Europe's largest projection screen 'Fusion' at The Forum in Norwich making animations.

After completing an MA in Moving Image and Sound Design at Norwich Arts School I joined the BBC working in post-production in Bristol. I joined the GFX HUB as a motion graphic designer and worked on projects such as Africa and Sport Relief. I also did a short placement at ITV working as a runner on This Morning and as a designer for ITV Creative.

After working in television I decided that I wanted to advance my digital portfolio so I started a small web design business called Web Host Creative. Our clients have included small businesses such as hair salons and larger ones such as the Lowestoft Sixth Form College website.

As a result of setting up Web Host Creative and all of my prior work experience, my portfolio was strong enough for me to apply for a full time position as a digital designer at Tribal Group Plc in Cambridge. I worked on web, print, publishing, e-learning and motion graphics projects.

Since leaving Tribal, I have worked as a freelance designer in Cambridge on various projects for different companies, including developing user interface designs for Aveva who specialise in the oil and gas industry. Being freelance has also allowed me to work in tandem on personal projects which I have found very rewarding.

At present, I am being employed full time by Feilden+Mawson, one of the country's largest architecture firms, as their in-house graphic designer.

Can you give an example of a time when you put the things you learned at Middlesex to practical use?

It is hard to point to just one example because the advantage a university-taught graphic design education gave me over non-graduates in the industry was that I had already tried my hand at such a wide variety of projects. Whenever I was asked to do something in the industry, I could call upon the experience I had acquired and use it to my advantage.

I chose the industry I work in because when I was a kid I used to draw every night instead of read books and I really enjoyed art at school. It was a gradual progression from there. I did graphics at sixth form and then I studied it at uni. Today I tend to go wherever the money is.

The pros are it can be very creative and your work is seen by millions which can be very rewarding. Being a graphic designer offers good career prospects and the opportunity to earn a lot of money. There are also opportunities to start your own business and earn mega bucks if you can make apps that sell to the millions.

The cons are that it is very hard work and while your work being seen by millions can be a good thing, it can also be a little scary at times. It is also mega competitive – more so than people realise. You must be prepared to face times when you are unemployed as it takes a lot for a company to be able to employ a full-time graphic designer. Often a company needs to be massive to consider this and the issue is you can then be up against cheap freelance labour which under-cuts your daily rate. The criticism can also be hard to take at times as the work is often very personal.

Getting to work at BBC Bristol was awesome. I really enjoyed my time there. I got to meet some famous presenters like Chris Packham and Steve Backshall. I got to work on amazing projects like 'Africa'. The people I worked with were very cool and very talented. I learnt a lot from them. While I was there I got to go on placement at ITV. They put me up in a hotel for two weeks next to the London Eye and I got to work on This Morning which was hilarious. The highlight of that was when I bought Emeli Sandé and the whole of her band lunch and got to see them perform live.

Get as much work experience as you can before you graduate because if you don't you will end up spending your first year as a graduate having to do just that. The difference will be that you won't get a student loan to help fund it and you won't be able to count your hard work towards your degree.

Try to not get caught up in work that has no commercial value. You're a designer not an artist. Think of big commercial projects. You need to aim high.

You have to realise that most graphic designers these days are required to code. To have the best chances of getting a job you will have to learn this at some point or another. It may not have been the reason why you went to art school and you probably thought that's what all the computer science students learn but in reality we are all in the same industry. The difference is computer programmers are at the top end of the pay scale and the designers are lower down, so the more code you learn, the more job security and money you will have.

Learn how to code - especially front end web development languages such as HTML, CSS and Java. Also learn about hosting, Wordpress, and other web related tools.