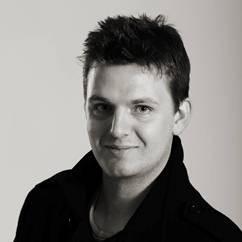 Luke Archer graduated from Middlesex University in 2012 with a BA in Fashion. The following year he was named Alfa Romeo Young Designer of the Year after entering the competition with George Jenkins, another of the University's former fashion students. Luke is currently working on his spring/summer 2014 collection which he will unveil during London Fashion Week and he also teaches the foundation degree in fashion textiles at North Hertfordshire College

What made you choose MDX?

I chose Middlesex because I knew that we were going to learn tailoring, corsetry and do a menswear project so we got to dabble in lots of different things.

When I was applying I looked at Middlesex and the University of Hertfordshire. Hertfordshire was more focussed towards commercial fashion but I wanted to go into the high-end, creative stuff. When I came to Middlesex to visit everyone seemed to be creating the sort of things that they wanted to, rather than being narrowed down and going in a commercial industry direction, so I decided I could be more expressive here and decided it was the place I'd like to go.

What did you do before you came to Middlesex?

I did a foundation degree at college and that sets you up to go to University so I came in part-way through the course. It was big step up and I wasn't quite ready for it at the time.

What are your fondest memories of your time at Middlesex?

You don't have a social life when you're doing fashion, you give up everything! It was nice because you have a community around you, your class become your family and you stay really late working in the studio. We supported each other a lot and actually got kicked out a few times for staying too late.

In terms of what I learned, my favourite thing was tailoring. The tutors were also really inspiring and we had external people working in the industry come in and look through our portfolios and give us feedback, which was really good for helping us prepare for the going out in the world. Generally the whole experience was really good.

The Grove is filled with art and design students working across all kinds of disciplines. Did you find yourself collaborating with each other?

I didn't really collaborate with other people but I did a lot of work outside of my department. I was on the fashion course but I got to play around with the 3D printer and I went and got involved in the jewellery department so I could learn how to cast from moulds. It wasn't part of my course but in my final year I wanted lots of things that I couldn't get so I just had to make them myself. It was good to have the facilities here and the technicians were always there to help us learn how to do new things.

How did your course prepare you for where you are now?

The workload certainly woke me up a bit. I was never very good with time management skills, but the projects make you plot things out in your head and I am much better at it now. The work placement that I did at Jasper Garvida in the second year helped me make a lot of contacts and everyone on the course did one so we all shared our contacts with each other.

How did you get the work placement and what was it like?

We had to go and send CVs out to companies we were interested in working for. I applied to quite a few but he was the first one to get back to me.

Did you enjoy your work placement?

The work placement was really good. I worked with Jasper three times in the end and we are still in touch now. I made a good friend and he is always there if I need advice.

How did you get involved in the Alfa Romeo competition?

George Jenkins, who studied BA Fashion Design, Styling & Promotion course at Middlesex University at the same time as I did BA Fashion, was invited to enter after his show during Graduate Fashion Week. However, because he only does millinery and accessories and didn't have the clothes to go with them he didn't think that he could enter by himself. We got to know each other because my outfits go really well with his hats and accessories, so we decided to enter the competition as a duo. It started like that, but we didn't even expect to be accepted never mind actually win.

What did it feel like when you found out you had won?

I kind of went into a state of shock. I had put myself down so I didn't get too disappointed if I lost, so even when I heard we'd won I didn't really believe it. I don't think I told anyone we'd won for a couple of days afterwards. At the same time it was also a big release because I instantly started thinking about the next collection.

Has it helped accelerate your career?

It has definitely helped. It is still quite a small title but it has helped a bit. Without experience behind you you're not taken seriously, so having that behind me has helped open some doors. We got quite a bit of coverage from it too so it helped push things forwards.

What advice would you offer to new BA Fashion students?

I know a lot of people come to university to have a good social life, but what I tell the people that I teach is that if you don't have a social life then you're more likely to get more work done. It depends what you want more, but I never go out because I'd rather spend the £60 that I would on a night out buying a new piece of machinery or some more materials to help push my career further.

Now I'm in a position where I don't really have anything else I need to buy because I've been collecting and hoarding for so long. It's more of an investment if you spend your money wisely and save to pay for the things that you need.

If you had a time machine and you could go back 5 years and give yourself one piece of advice what would it be?

Start saving. I'd also tell myself do some internships because I learned so much in the six-week internship that I did. There is nothing else that compares to being stuck in the environment you want to work in. University prepares you to an extent, but it's still within an educational environment and through an internship you experience the real-life problems you're going to encounter in the industry. They also help you build up a database of contacts.

What are you doing now?

When I'm not working on my latest collection I teach fashion textiles part-time to foundation degree students at North Hertfordshire College. I was at the college for a long time and I guess I was one of the better students in the class so that kind of got me the recognition necessary to start teaching there because they actually approached me for the job.

How did you make that first step to actually become a designer?

Jasper Garvida and I became really good friends and we're on the same wavelength, although he's a lot more advanced than I am. One day he said that he'd like me to be his design assistant and I had to think about it a lot. Since college I had had it in my head that I was going to be a designer, but this was the first opportunity that had arisen which could have taken me off that path. He let me go away and think about it but I ended up deciding that I was going to stick to my dream and try and chase it.

Jasper was shocked and I was shocked, but working for him had really given me the confidence I needed to go for it and I just thought 'I've got to try; you don't get anywhere if you don't try'. The first thing we did was set up the Twitter page and registered the name and then we took it from there. I'm running on fumes financially, but I have made the decision that I won't go back to a job I don't want to do. It's better that you're happy doing what you want to do than are stuck somewhere you don't want to be.

Where do you hope to be in five or 10 years?

I'd like to be earning some money by then! They say it's around four seasons until you start making money from your outfits and the collection I'm working on at the moment is my first proper season. The second will be in February next year.

Who do you see as the typical wearer of your clothes?

I don't see a fixed type of person for my clothes. As a self conscious person I don't like that some designers design just for one type of person and I think that if an outfit is targeted to one kind of woman it's not really fair.

I want to make high-end off-the-rail clothes, but I really enjoy the made-to-measure, custom-made stuff because it's more arty and exciting. I've tried really hard this time to make things that can actually be worn. I still want them to be a bit eccentric, just without being impractical.

What do you think of high-end designers doing high street collections?

It's always a publicity stunt. Versace did it for H&M, so did Stella McCartney and Jonathan Saunders did one for Debenhams. It's maybe a good idea for them because it opens them up to a new audience, but maybe it's just because times are tight and they want more money.

Tell us about your recent collection.

There are 32 pieces in all, but 20 'looks'. There are shorts, jackets and trousers mainly. I don't want to give too much away, but everything I do is inspired by nature and other things that fascinate me. I love the idea of being able to replicate things from nature so this collection has a lot of that. I'm not telling you any more than that though.

To find out more about Luke's collections visit the Luke Archer website.