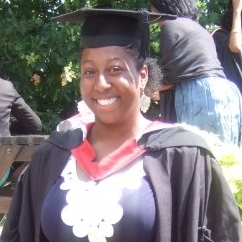 I went through clearing, however Middlesex turned out to be my best choice as I had initially only applied for Journalism courses at other institutions, but Middlesex offered the opportunity to study Journalism with Spanish, a language I had been studying for years and wanted to continue.

The fact I got to continue to study Spanish was a major selling point for me. When I was applying for university, I found many institutions didn't combine many subjects with languages, in particular media courses. However with this course I had the opportunity to learn a new field whilst continuing to develop my knowledge of the language.

As the course explored current affairs we often had very interesting debates in our seminars, exploring key issues and stories addressed in the media and the way in which they were portrayed across different mediums e.g. newspapers and television. I am very opinionated so I enjoyed being able to put across my opinion whilst listening to others and forming responses to counter and support their views. The sessions were often thought-provoking and improved my analytical skills, enabling me to look at issues from different angles as well as be more open and receptive to different views, a skill which is extremely useful in the world of work.

My fondest memory was participating in the Erasmus programme in my third year; by far one of the best things I have ever done. I chose to study at the University of Córdoba in Spain for a semester, in which I undertook relevant classes (taught in English and Spanish) and lived with two Spanish girls and a German girl meaning I had to speak Spanish all the time. Although I had studied Spanish since secondary school I remember the shock of arriving in Spain and feeling as if I didn't know any Spanish at all; it was like starting afresh as the colloquial everyday Spanish was not the Spanish I had learnt at school, college and University.

Whether it was in the supermarket buying groceries, at the train station buying a ticket or on the street asking for directions, I was forced to speak Spanish on a daily basis. As a result of this my confidence in my speaking ability grew immensely.

Make sure you research the course thoroughly so you know exactly what you'll be studying and what benefits and opportunities are available to you, such as work placement and study abroad options.

How did your course and time at Middlesex help you to get  where you are professionally today?

As I was studying two subjects I had to be extremely organised and careful about how I spent my time studying for them. Journalism required more reading which meant I had to keep abreast of current affairs and developments in media and communications, whereas Spanish required a more practical approach by actively speaking Spanish whilst applying the relevant syntax, vocabulary and tenses.

It taught me great project management skills and enabled me to utilise my strong organisational skills to effectively plan and structure projects. In my third year, after returning from my exchange in Spain, I had to complete my dissertation in half the time everyone else had whilst juggling participating in the BBC London Step Up Scheme 2009, for which I attended weekly workshops and produced an article which was published on the BBC website. Spanish has also proved useful as within some of my former roles I have come into contact with native speakers and therefore been able to utilise my language skills to engage with them.

Middlesex broadened my horizons in terms of the industries I could work in, as having studied Journalism and Spanish education was not an industry I had considered. I had always enjoyed working with young people and worked as a student ambassador during my degree. This enabled me to work with children of varying ages at on-campus and in-school events and I thoroughly enjoyed it.

I would say the pros of the industry are that it is extremely rewarding as you are actively contributing to providing a great service and education to the next generation and in doing so are able to share your own experiences.

The cons are that in light of tuition fees and changing structures, jobs within education are not necessarily the most secure – but then again the same can be said for a lot of industries whilst the country is in a recession.

After working as a Student Ambassador and Professional Student Ambassador from my second year up until a year after graduating, I was invited to apply for a graduate role within the Outreach team as Outreach Coordinator, which meant I was involved in organising some of the events I had worked at as an ambassador.

Some months after working within the role, our team moved into the Marketing Department in which I started a new role - Student Ambassador Scheme Coordinator - which gave me a great sense of independence and responsibility and led to me playing a big part in adapting the current online system - the Student Ambassador Booking System. This is now used to recruit and book student ambassadors across many university departments. I didn't envisage that my initial role would lead to such an opportunity and would arm me with a range of skills and experience that would allow me to carve a career within marketing and communications.

Although I haven't pursued journalism/media as a career, I had a few opportunities which exposed me to the industry and gave me a practical insight into the way in which the media operates. In January 2010 I was selected to present a news piece on Drapers Field, a local sports facility in Leyton, East London which was being closed down and renovated to accommodate back-of-house facilities for the Olympics. It had been a key sports facility in the area for years so closing it down stirred up a lot of emotion and controversy amongst the locals. I was filmed presenting the story which was aired on BBC London news and is available on the website: http://www.bbc.co.uk/news/uk-england-london-13157668 .

After working in a number of roles within marketing and communications, I have a strong desire to pursue the communications route, as I want to work within a role in which I can employ my strong communication and interpersonal skills. I also hope to be able to use my Spanish within a role so it doesn't get too rusty!"

Perseverance is key– hard work always pays off and although rejection can be disheartening there will be someone who is prepared to give you a chance.

Gain relevant work experience BEFORE graduating - many students leave it too late to gain some experience and lose out on graduate roles because of this. Nowadays employers want university graduates with work experience which compliments the theory they have acquired whilst studying their degree.

Travel – exploring new and unknown cultures broadens your horizons and may be the eye opener you need to decide what it is you really want to do. Don't be afraid to try something out of the ordinary as it may be the best thing for you.

Get relevant work experience whilst studying; you won't be a student forever and working full-time doesn't enable the kind of flexibility a degree does to study and work part-time or on a voluntary basis. That way you can gain the experience before graduating meaning you are one step ahead of other graduates when you complete your course and in a better position to gain paid employment instead of working unpaid or on a menial salary.