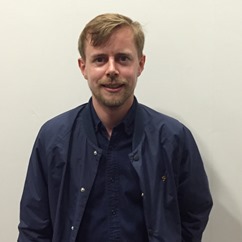 Despite having only graduated in film from Middlesex University a few years ago, Ben Charles has already worked on many visual effects projects - the most extraordinary being his CGI work in the most recent Star Wars film.

Here, he talks to us about knocking on a few doors, and how hard work and determination led to an exciting new role with Industrial Light and Magic.

I chose Middlesex University because it offered a course that gave me the opportunity to study film. The course covered multiple areas of interest and enabled me to explore creatively. It was the only university in London that met all my requirements, so I left another university after my 1st year to join Middlesex.

Tell us about your current role.

Principally, I work on shots from old films by opening them up and discovering how they’ve been done and try to replicate this myself.

I also work with Computer Generated Imagery (CGI) elements, which could be robots or aliens or smaller items such as trees. It’s important as a roto to bring original elements back in so it looks more realistic, which includes bringing actors back into their original position.

ILM are part of Disney now so it’s a really big and exciting organisation to work for.

I have always wanted to work within the film industry. Being exposed to multiple areas of film, I decided to combine my degree with my technical skills and work in visual effects.

Working in this industry is amazing because you get the opportunity to work on top feature films with leading professionals. I am constantly learning new skills, which I really enjoy.

The negative aspects are that the hours are long and some projects require late nights and work on weekends to ensure they are completed on time. As a junior employee, there is a lot required from you. This doesn’t change as you progress though, as I see senior members of staff staying late and working weekends too – it’s all hands on deck with feature film deadlines!

Did you do any placements while you were at Middlesex?

I did an internship at a place called Some Such and Co, a production company who set up shooting for adverts and videos. I was curious about that area and went there to learn, but discovered it wasn’t for me.

I also had the opportunity to work on the Jimmy Kimmel show in America where I provided visuals for The Wanted when they played on stage.

Introducing me to the different demands that different formats require, these experiences were invaluable.

What have been the most effective ways of enhancing your professional profile?

Many employers want to know how you have kept busy and what you have been up to since graduating. They like proactive individuals that find something to do even if a job opportunity isn’t available.

As soon as my degree had finished, I applied for a vast amount of jobs whilst working on personal projects as I waited for interviews. This enabled me to update my show reel and make myself look more employable. This in turn, helped me pick up freelance work that I would add to my CV/LinkedIn to market myself as good candidate for jobs in my field.

My top tip is to remain active during your job search. Work on small projects to keep on learning new techniques, it doesn’t have to be something big, just a weekend project each month. These small projects can really enhance your show reel.

Once you’ve graduated, take some time off to figure out your next steps and then jump straight back into doing personal projects whilst searching for freelance and/or full-time work.

Finally, make sure you update your CV/LinkedIn with details of any work you do. If your CV indicates that you haven’t utilised your time well as a graduate, you can come across as demotivated to an employer – especially as competition is fierce!

What has been your proudest achievement to date?

My proudest achievement to date has to be landing a credit on Star Wars: The Force Awakens.

It was an amazing experience being to work on the film. Whilst it was a steep learning curve, it’s helped me to excel in my current position and to remain working for such a great company (Industrial Light & Magic). It is a great feeling to see my portfolio growing with the best visual effects company in the industry.

Getting to work on really great films is amazing. When I go to the cinema and see the credits with my name on – I know all my hard work has been paid off.

A still from Ben’s CGI work in Star Wars: The Force Awakens