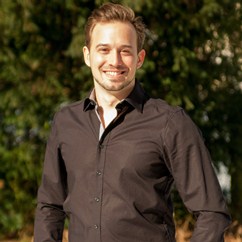 Daniel Wiedemann was working as an art director in Hamburg, Germany, before moving to London to follow his dream of becoming a game creator. While studying for a master’s degree at Middlesex he set up the independent game development studio FIERY THINGS. He is now undertaking a PhD, researching new generation interface technologies and user experience in digital games.

What drew you to the MSc Creative Technology degree at Middlesex?

I studied communication design in Germany and after that I worked as an art director at an ad agency in Hamburg, but I felt art direction alone wasn’t fulfilling enough so I looked for master’s degrees that would fill a gap in the technological side of my skills.

I’d been programming for several years but I wanted to do a master’s degree and the MSc Creative Technology degree was broad enough in its content base – you can do things as varied as develop games, record movies and create interactive installations – so it was really attractive and why I ended up at Middlesex.

What skills did you learn during your master’s?

Although I had coding experience before I came to Middlesex, the game that I developed, LizzE – And the Light of Dreams, was my first complete game development. I had never used Unity before and the master’s degree provided the opportunity to apply these new skills and gave me the space to develop the game that I wanted to do personally with basically no restrictions.

During the master’s I learned how to plan a project from idea and concept, through to concept art, software development and basically every aspect intrinsic to a game, then implement everything myself.

Did the experience of your master’s impact your decision to pursue a PhD?

I actually had the idea of doing a PhD before I applied for the master’s, but one of the good things about Middlesex was that I was in discussion with the MSc programme leader Dr Magnus Moar about doing a PhD before I even did the master’s. He is now my supervisor alongside Dr Peter Passmore, so talking in advance to the people who would be my supervisors was a huge advantage.

What are you studying for your PhD?

My PhD is about new generation interface technologies connected to digital games and their consequences for user experience. As part of this I have developed a Virtual Reality game called Gooze – a survival horror where you’re trapped in a room and have to escape. I’m using head-mounted display technology like Oculus Rift and infra-red cameras mounted to the front which allow the user to interact with the pretty gruesome scenery.

What do you plan to do after your PhD?

The ideal scenario is that after my PhD I will have created two or three different applications that I can then monetise through FIERY THINGS, the game studio I founded. If that doesn’t work then I will at least have experience of game development and will be able to apply for jobs at games studios.

How important was postgraduate study to your professional development?

The master’s was important to my professional development. I had been working in art direction but I wanted to work in game development and the MSc gave me the space and time to fulfil that dream.

What advice would you offer someone considering studying for a master’s degree?

It is important to create a network if you don’t already have one, so talk to as many people as you can and try to connect with them. Through Middlesex I gained a lot of contacts with academic staff and the industry professionals in their networks, so if I had looked for a job after the degree it would have been easy just through networking.