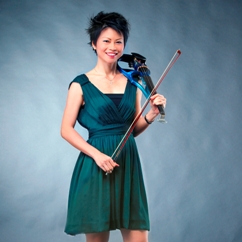 "I chose Middlesex because it was the only UK university that had a music twinning programme with a local college here in Malaysia at that time.

"It was FABULOUS studying in London. This eventually became a stepping stone towards my future studies, providing me with the opportunity to attend and participate in music festivals - an experience one simply can't get being in Malaysia.

"It was definitely a door opener to bigger and better opportunities in the UK.  I loved the learning atmosphere, which was very different from back home in Malaysia. Students were given free time and space to explore their musical inclinations.

"I graduated from my BA Music course with First Class Honours and was then awarded a Luther and Ernest Gaunt Scholarship for Strings to study at the University of Leeds.  During my time at Leeds, I was chosen to receive a Foreign and Commonwealth Office Scholarship, in association with the British Council and Leeds, which enabled me to study a Masters in Music Performance (MMUS) degree .

" I then went on to complete my PhD studies with Heriot Watt University, also in the United Kingdom, in 2009. The focus for my PhD was on music and consumer behavior.

"During my time in the United Kingdom, I had the privilege of participating in several seminars and masterclasses held by prominent musicians.  In the Summer of 1998, I participated in the Aberswyth Music Festival in Wales, the renowned Edinburgh Summer Festival and also the Aberdeen Music Festival in Scotland. I was also given the opportunity to play an active role with the Sorrel Quartet during the Leeds Annual Music Festival in 1999.

"When I returned to Malaysia, I was selected to participate in the prestigious Asian Youth Orchestra for the year 2000 and travelled with the orchestra to Vietnam, Japan, Australia, Korea and Hong Kong. I was then lucky enough to perform alongside Hong Kong superstar Jacky Cheung in his Music Odyssey Tour 2002/03 which was a 40 concert tour around the world.  The following year, I performed with Taiwanese heart-throb David Tao in his 2003 Soul Power Tour and in 2008 I was invited to play with another Hong Kong superstar, Alan Tam.

"I have received several awards since my time at Middlesex University. These include being nominated Honouree within the category of Personal Improvement and Accomplishment at The Outstanding Young Malaysian Awards 2004, receiving Martell's Rising Personality Award in 2008 and UPM's Vice Chancellor Fellowship Award in the category of Arts and Creativity in 2012. I was also selected to be included in Marquis Who's Who in the World 2012 edition and in the Malaysia Book of Records 2012.

"I am also a fully accredited examiner for the esteemed Trinity College Music London Examination board and I currently head the Music Department of Universiti Putra Malaysia."