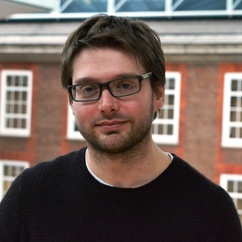 John Lucas graduated from Middlesex University in 2007 with a BA in Creative and Media Writing and his debut novel, Turf, was published by Bodley Head in 2012. In between editing his second novel and drinking very strong cups of tea he returned to Middlesex University to give a talk at the North London Literary Festival 2013.

You recently took part in the NLLF 2013 - how did you end up returning to Middlesex?

I am Facebook friends with James Charlton (Director of Media Arts Programmes), who is one of my old tutors, and he sent me a message a couple of months ago to ask if I'd be up for doing it and I said yes.

What was it like coming back to Middlesex University?

I haven't been back to Middlesex since I graduated actually. I was at the Tottenham campus for the first year then Trent Park for years two and three. This is the first time I've ever been to Hendon, it's actually a completely unknown part of London for me.

How did your session at NLLF go down?

The session went really well I thought. It was quite a nice setup, taking questions from the floor but with Matt (Haig, author of bestseller The Last Family in England) there to bounce off too so you have more interesting avenues to go down than you would otherwise.

You studied at the Tottenham campus. How do you feel about it relocating to Hendon?

The important thing I think is having somewhere you feel is a good place to be, especially for a university. It is important that it feels inspirational and that there is a good buzz about it.

The Hendon campus has more of a feel of a proper University. The buildings looks pretty cool and it has that nice feel about it so I think it's a good thing.

You're in the process of writing a new book. How is it coming along?

I am up to my eyes in edits for my second book at the moment. I don't know, it's good... Potentially!

What is it about?

The characters are slightly older than they are in Turf. It's about this kid called Sam who has just started A Level college. He meets a girl called Rachel and falls in love with her, but a) she has a boyfriend and b) he has this dark secret, a traumatic experience from his past, which is preventing him from dealing with his feelings. It's mainly a love story but it also has this darker element to it.

You're from Hackney and write about gang culture in the East End. What did you think about the Channel 4 drama Top Boy?

When it was on I had finished writing Turf, but I had written what I had written and it was quite a personal book in lots of ways. I don't need any excuse to become neurotic so I didn't watch Top Boy. The only thing it would do is make me question what I had already done.

Your first novel Turf received great reviews. How did you go about researching it?

I didn't do that much actual research for Turf, which kind of worried me at the time. A lot of it was based either on an amalgamation of my own experiences, stuff that I was aware of happening around me or things that I had heard about in the media. I just used my imagination to fill in the gaps.

How important is research when writing a novel?

I think the most important thing when writing a book is that you really have a feel for the material, the characters and the world you're writing about - that can see you through. You can get a bit too carried away with research.

I have read books that just don't feel convincing and yet they have pages of factual information stuck in just to persuade you that they know what they're talking about. As long as it has the right kind of feel you can get away with just using your imagination I think.

What inspired you to write Turf?

I came up with the idea for Turf while I was at Middlesex in the second years of my degree. It changed a lot from that point but at the time I was living in Stoke Newington and there were these peculiar, eccentric characters around the place. I thought 'what if they were actually undercover angels and they were secretly looking after the people in the borough'. So I came up with this team of angels and it was called 'The Angels of Hackney' to begin with. It was about one angel in particular who becomes friends with a young kid called Jay, the main character in Turf, and it was about their friendship as the angel tries to help him get out of this gang lifestyle.

I worked on it a bit in my second year and then a bit more in another module during the third year then when I left Middlesex I had a few ideas but I thought I would work on that one as a novel. The angel side of the story just wasn't really working but the Jay side of things was so that side of the story kind of took over. Now there are these peculiar, mystical characters that come in and out of the story who may or may not be angels or ghosts or hallucinations, it is not entirely clear. The main thing was that it only seemed to work when it became Jay's story, it was almost like I didn't really control where it was going, that was just the only way it would work.

What advice would you give to budding novelists?

Keep plugging away. Keep going until you have actually finished something because it is incredibly hard to judge how good you are until you actually have something complete in front of you. You need a beginning, a middle and an end before you can really assess what you have created.

It's hard because you get so little exposure as you're putting it together that it's hard to know if what you're creating is any good. Personally, I like to keep my writing close to my chest so I feel that the fewer people I show my writing to the better it turns out. However, on the flip side of that, you have to be open to criticism and be honest with yourself. You have to believe in what you're doing, but if it's not any good don't keep flogging a dead horse. Turf turned out to be a completely different novel compared to what I started with and that was because of the criticism I gave it as I worked through it.

Why did you choose to study at Middlesex University?

I didn't do well at A-Levels first time around so in my mid-twenties when I decided I did want to do a degree I enrolled on an access course at the City Lit Centre for Adult Learning. We were doing lots of sessions with different universities around London to see which one we wanted to go and study at. Maggie Butt (Deputy Dean) visited us to talk about Middlesex and she really sold the idea of the University and the course to me.

What made you choose your course?

The course at Middlesex seemed to be the one that was most up my street creative writing-wise and it seemed to have a good mixture of content. I didn't want to do a straight English degree because I was keen to spend a lot of time working on my own stuff. I had a lot of ideas about novels and things I wanted to write so I wanted a course that would give me the space to write my own stuff and focus more on practical writing than studying. There were also interesting modules like the horror writing module where we focussed on different genres so it exposed me to new styles that I had not considered beforehand.

How much did your course help you get where you are today?

I always felt confident about my writing voice and style, that is one reason I got into writing in the first place, but doing the degree really helped hone that and make it into something more sophisticated and palatable. It also gave me the confidence to write things that were much longer. I'd always been interested in writing a novel but it was a bit like 'where do you begin?' The course gave me the confidence and provided me with a good foundation to begin a novel.

What three tips would you give to somebody about to choose which university to go to?

The most important thing for me about university is choosing somewhere where you think you'll be inspired, not just by the course itself, but by the whole university environment.

1) It's not just the teaching and the modules that are important, it's about the other students that you bounce off and the whole immersive experience of the University. Choose a course and institution that you think will interest and inspire you.

2) You spend three years learning and studying but the terms aren't really very long so it's important you use that time in between terms constructively and don't lose enthusiasm or momentum.

3) You have to be willing to do a lot of things off your own back and it's a lot easier to do that if you're really involved in what's going on at the university, if you're getting as much out of your course as you can and you're taking advantage of what the university has to offer in general. In lots of ways it's up to you to make it a rewarding experience.