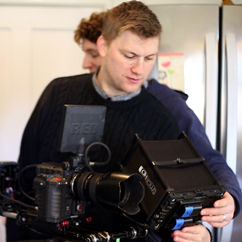 I wanted to work in TV and I wanted a course that was more focused on the 'hands-on' skill of film-making rather than the theory.

The filming and editing as well as the opportunity to run my own news channel in my final year. I still own the domain name. I was immensely proud of what I achieved with that.

Make sure you know what you want to get out of the course before you begin. Courses are great but Middlesex stands out because its staff want to get you to where you want to be. Know that, communicate that and you'll be in a great position.

It taught me a skill set which I use every single day in my working life. I learnt how to film, how to edit, how to light and, most importantly, how to tell a story using pictures. It gave me the tools to shape the foundation of what I do professionally. After leaving University I got a job that I wouldn't have got if it wasn't for the showreel and practical experience I amassed during my final year. Every job since I've built on these foundations.

I have always made films, since I was about five. I just knew I had to do it. I followed my dream and it has happened for me. I'm incredibly lucky to work in a creative field and earn a very good wage at the same time. I owe Middlesex for that. I owe Roddy Gibson (my tutor) a hell of a lot. Mostly for his patience!

The pros are it's incredibly fun, it's creative, it's new every day and I travel a lot, which is great. The cons are it can be extremely stressful. It's also a lot harder physically than I first imagined. There is also unbelievable competition for any work. I can't remember the last job I applied for that didn't have 100+ applicants, so you have to find a way to make yourself stand out.

How did you get your foot on the career ladder post-university?

I was lucky. While at university I got a job at the Home Shopping Channel. This gave me industry experience which I was able to build on. I was lucky that a tiny company was hiring a £12,000 a year job which was aimed at graduates. I was able to show my shooting/editing skills and nab the job which was a fixed term (1 year) contract. Since then I've found similar jobs, working up the ladder to where I am today.

My current role; I didn't get the job initially but I called the guy doing the interview and told him he was making a mistake! I said that I'd work in a graduate position on a graduate wage for a month to prove it to him. He agreed and was so impressed he gave me the job! I've since worked my way up the ladder and I now run the video production department.

Who knows? TV/ online media is very new and there are not many 35/40 year olds about… I am going to just keep broadening my skill set and picking jobs that I think will teach me things. I have no idea about security long-term but then I have never worried much about that.

Get relevant work experience, as much as humanly possible, while you're doing your degree. Build up as many examples of work as you can during your final year. If something is not right, re-do it. They'll want to see it during your job interview. Work hard, always say 'yes' to everything and convince people of your worth.

Keep going. Keep working. The pay-off is worth it.