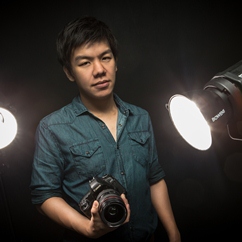 Tell us a bit about what you’ve been doing since graduating.

Throughout the course, life was a bit of a roller-coaster being an overseas student adapting to the British way of life, but that was no match for how life has been since graduating. I've spent time working for an international advertising agency, putting some of the skills I picked up at Middlesex into practice.

I've worked on a number of local and international television commercial projects, including a well-known international brand of soup, during which I had a great degree of autonomous control. I then moved on and joined a Malaysian production house, where I continued to help develop advertising campaigns for the local market. Whilst working here I felt the need to begin my own project, and began working on my current business.

I am now the proud owner of Cupcat images, a photographic studio that caters for a growing demand for Cosplay imagery, which allows for the capture of both video and stills.

What drew you to this industry and what do you enjoy about it?

One of the key elements that attracted me to my current business setup was the ability to have total freedom of creativity. Cosplay is situated between the realms of real life and fantasy, and as such I've been able to put together an offering that appeals to a large number of Cosplayers both in Malaysia and overseas.

I also enjoy the flexibility and freedom that working for yourself brings. There are times when life is pretty stressful, and I feel like I am working 25 hour days, but when I want I can choose leisure time to suit me, and not have to answer to 'The Boss' - I just look in the mirror instead.

You did both your undergraduate and postgraduate degrees at Middlesex. What made you want to continue your study here, and why MA Film?

I originally chose Middlesex on the recommendation of some friends, but was unsure as to what to expect. However once I'd begun studying, I found that my expectations were exceeded considerably.

The professionalism shown by the course tutors, the friendships I developed with my fellow students and the overall experience of the course itself convinced me to continue my study beyond undergraduate into postgraduate, and it's a decision I don't regret.

How have you been able to use what you learnt at Middlesex since you graduated?

I've picked up a lot of technical skills whilst at Middlesex, but it's also developed my organisational skills. I can confidently take a project, and develop it from pre-production to the shoot and onto post-production. Within the shoot itself, the course was able to give me a grounding in how my equipment worked, and how critical good lighting is in delivering a great result. It's not by chance we make amazing images and videos!

What did you enjoy most about your master’s at Middlesex?

The thing I enjoyed most about Middlesex was the sense of openness and creative freedom. In my home country I would have to consider my audience very carefully, so as not to create any disharmony, whereas at Middlesex I could be who I wanted to be without fear of discrimination and prejudice. All of my work reflected this, and the course itself allowed this degree of freedom in the choice of subjects presented. Aside from this I enjoyed how friendly both my fellow students and course staff were. The support offered was second to none.

What advice would you give to someone hoping to follow a similar career path to you?

Ensure you keep your dreams in line with reality. Financial constraints can sometimes be a burden, so start small, and grow slowly. Don't expect to be the biggest and most successful straight away, but with focus, effort and determination, you can succeed. The journey isn't easy, but the destination is rewarding.

Finally, what does the future has in store for you?

The future for me can be divided into two sections. Firstly the 'business' section, in that I would hope to see the growth of my studio business, with the potential to expand into other Asian countries in the long term, as the demand for Cosplay increases.

Secondly, on a personal level, I hope that my creativity and artistic outputs have a positive impact on my part of the world. The United Kingdom has progressed so much in recent years with things like equal rights marriage and a whole raft of anti-discrimination measures that have allowed creatives to be more open in their work. Asia has a long way to go, but I would like my creativity to push the boundaries and help educate and develop people's thinking to become more accepting.

Middlesex gave me the grounding and encouragement to see past restrictions and prejudice and present my work in a way that is thought provoking and challenging to local stereotypes.