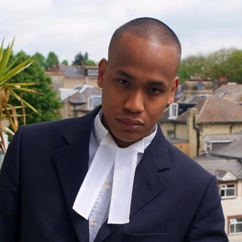 I attended an Open Day at Middlesex and liked what I saw. Further, the university and halls of residence (Hendon campus) were very close to where I was working at the time – not to mention being located in an ideal part of London (transport links to central London etc.)

What attracted you to your course and Legal Practice?

While growing up in Tottenham, North London, I was exposed to the everyday struggles that young people have to deal with on a day-to-day basis. As a result of this, I became determined to do my best to help others and be a role model for the younger generation of today. I thought that I could best achieve this by understanding the law and becoming a barrister.

Apart from these reasons - probably watching a bit too much Rumpole of the Bailey!

What are the pros and cons of working as a Barrister?

In relation to the pros of the job, there is no greater feeling than being on your feet in court and making submissions or cross-examining a witness. Further, as a barrister you are self-employed, so you don't have anyone telling you what to do. You have the freedom to deal with your own cases in whichever way you think best. If you screw it up…then you only have yourself to blame!

The cons are you often have to work terribly long (anti-social) hours. You are self-employed, and, unlike a solicitor, are not in receipt of a salary. Payment for cases you do can sometimes come in many months later. The (constant) legal aid cuts have had a massive impact on barrister's earnings, particularly at the junior end of the Criminal Bar.

The Criminal Law module, as crime was the area of law I was most interested in (and specialise in at the moment). I also enjoyed the Legal Method module, in particular the moot (mock trial) that I had to do, as that was my first exposure to oral advocacy in a courtroom setting.

Playing pool with Talal and Enver in the SU Bar! Two students I met during my first year at Middlesex and remain close friends with even now (some six years later!)

You have to be absolutely sure that law is the subject you want to study. There are a number of prospective students that I have spoken to over the years who have admitted that the only reason they chose to read law was because it is a respectable degree, or, even worse, their parents forced them to do so. If you do not have the drive or passion to want to study law you will not succeed. I would also add that this advice applies equally to achieving the professional qualifications in order to be able to practise as a barrister or a solicitor.

Studying law at Middlesex provided me with the foundation I needed to progress in my career. During one of my first lectures at Middlesex, Stephen Homewood said that, The law doesn't revolve around the world, but the world revolves around the law.  As time went on, I realised just how right he was. To date, nearly everything I have done professionally (as well as personally) has, to some extent, been affected by the law.

Studying for a law degree is very intense. During my time at Middlesex I had to constantly meet course deadlines, prepare for seminars/lectures, read complex judgments, dip in and out of different areas of law (while balancing all of this with my social life). I quickly learned how to work under pressure and multi-task, and these skills have served me while through Bar School and pupillage.

During my final year at Middlesex, I applied for a place on the Bar Professional Training Course (formerly known as the Bar Vocational Course) at BPP Law School (the vocational stage of becoming a barrister).  Once I graduated from Middlesex, I started the BPTC in 2010 (part-time). During my first year at Bar School I applied for pupillage (the training stage of becoming a barrister). I managed to secure pupillage interviews with Doughty Street Chambers, 18 Red Lion Street and Tooks Chambers.  I was unsuccessful with the first two Chambers.  However, I was successful with Tooks, and secured a pupillage to start with them in 2012 (after completing the BPTC).

Securing the pupillage with Tooks Chambers.

The immediate future: hiding from my clerks so I can avoid being sent to the ends of the earth.  I was sent to Durham Crown Court the other day…for a matter listed at 10AM.  On the up side, I got to visit Durham cathedral, which was beautiful.

Long term: hopefully securing a tenancy with Tooks Chambers and if I get the time, a holiday in Athens!

First, aim to obtain a first class degree. Second, obtain as much work experience as you can (within reason). Third, read other books apart from legal textbooks.

In relation to my third point, my old (most learned) Pupil Master, Nick Wrack, told me that reading good literature would help with my advocacy (both oral and written).  Every person who will use words as the tools for their trade (lawyers, journalists) should read and reflect.  Do so, and what you write will appear fresh and interesting, catch the eye and delight those who read what you write. There is always another way of saying things, even the most obvious things.

To the 17 year old me: obtain the best possible grades at college.  When applying for a pupillage or training contract, bear in mind that some Chambers/Firms receive (and have to sift through) hundreds of applications, and it makes their lives easier to be able to disregard applicants who obtained poor or average grades at college/sixth-form.

Always remember that competition for a pupillage or a training contract is extremely fierce!