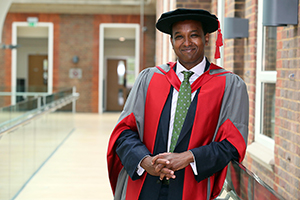 Mr Omaar won a Bafta for his coverage of the situation in Kabul. His work in Darfur also earned him a Peabody Award.

Last year, he also presented a BBC series on the Ottoman Empire, which was the subject of a Middlesex University debate.

In addition to his broadcasting work, Mr Omaar has written two books; Revolution Day: The Real Story of the Battle for Iraq, and Only Half of Me: Being a Muslim in Britain.

Middlesex University Vice-Chancellor Professor Michael Driscoll said: "Rageh Omaar's bravery, tenacity and intelligent reporting have shone a light on some of the most significant international events of our time. We are delighted to be able to present him with this award."