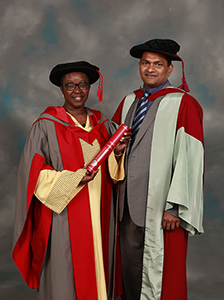 FAS seeks to foster, strengthen and promote the leadership role of women in conflict prevention, management and resolution on the African continent.

In addition to her role at FAS, Ms Diop is Special Envoy for Women, Peace and Security at the African Union Commission. She has recently been mandated to investigate the human rights violations and other abuses committed during the armed conflict in South Sudan.

In 2011, Time Magazine declared Ms Diop to be one of the 100 most influential people in the world. She has led numerous peace-building programmes, and has taken election-observing teams into post-conflict countries such as Liberia.

Ms Diop has also led several peace missions into crisis zones, and has facilitated peace negotiations amongst women, including those in Burundi and the Democratic Republic of the Congo.

She played an instrumental role in achieving gender parity within the African Union Commission in 2003.

"She has made a tremendous difference to the cause of women's rights - both in Africa and around the world - and we are delighted to present her with this award."