Imogen Heap thanks Product Designers for her Listening Chair

The unique Listening Chair made by Middlesex University Product Designers for Grammy Award-winning musician Imogen Heap travelled to concerts around the world hearing the thoughts of her fans. 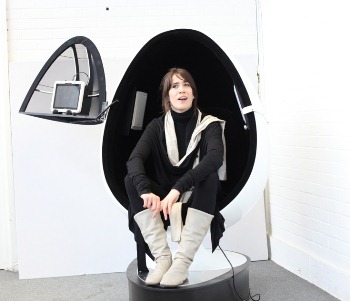 Ground-breaking musician Imogen Heap has paid tribute to the Middlesex University Product Designers who created her now famous Listening Chair while performing at Reverb 2014, a festival she curated at the Roundhouse in Camden, north London.

Created two years ago by then-students Rebecca Board, Sid Odedra and Iliyan Kukushliev, the Listening Chair is an interactive egg-shaped seat which asks fans to discuss "the song that still needs to be written".

After taking the chair to shows in Sydney, Edinburgh and London during 2012, Imogen used the video responses she received from fans who sat in it to provide the inspiration for a song on her 2014 album Sparks.

Imogen said: "I really enjoyed working with the students at Middlesex during the making of the listening chair. Hundreds of people sat in the chair inside iconic buildings like the Sydney opera house, the Royal Albert Hall, Southbank Centre and Roundhouse Camden amongst other places and it looked great wherever we went.

The Grammy Award winner is renowned for her interactive relationship with fans and recently hosted a private garden party at her house – also called the Roundhouse – in Essex. She also used images of her fans' footprints on the Sparks album cover.

Reverb at the Roundhouse was equally interactive, with the audience able to sit in the Listening Chair and also try out a new instrument Imogen has developed – a pair of electric gloves fitted with sensors which respond to the wearer's gestures.

"[The students] really helped create a great experience and I can't thank them enough," Imogen added. "I am now having it set up as a place to take online skype interviews and take meetings with my gloves team so I can always guarantee good light and sound and little background noise. Lucky me!"

Debbie Jedwab, Senior Lecturer in Product Design who project-managed the Listening Chair project after being introduced to Imogen via long-term collaborator at Middlesex University, renowned designer Moritz Waldemeyer, was delighted to be at the Reverb festival and see the Listening Chair song performed live.

She said: "Going to Reverb and seeing Imogen on stage talking about how she wrote the song after help from our students made me very proud that they had taken part in it.

"Our Product Design degrees are fantastic at giving students the practical skills they need so they were largely able to just get on with it themselves. The fact she chose to acknowledge them, both on the back of the album sleeve and at the festival was a nice touch because she didn't have to."