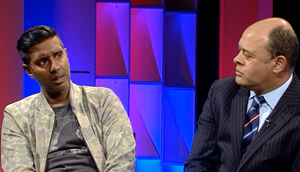 Year 12 students from across London went behind the scenes of a TV show on 2 December, when they visited Middlesex University to watch the recording of an exclusive episode of Broadcasting Today.

Thirty five students from Woodhouse College, Stanmore College, BSix Brooke House College Sixth Form and Epping Forest College attended the Hendon campus for the show – one of a number of Middlesex events designed to inspire the next generation of university students.

The online series is produced, filmed and edited entirely by Middlesex students, with Professor of Journalism Kurt Barling interviewing a prominent figure from the world of broadcasting in each episode.

For the exclusive schools' edition of the show, Prof Barling invited DJ Nihal into the Broadcasting Today hotseat.

The BBC DJ and broadcaster was quizzed about everything from cyberbullying, Twitter trolls and racial stereotyping, to his music career and how he made the transition to broadcasting.

"Everyone's path to success is different but they all involve a lot of hard work," said Nihal. "I would advise young people to get themselves out there as much as possible because networking is really important these days."

Laura Wall, an English teacher at Woodhouse College, was one of four teachers to bring her students to the University for the day – which also involved a tour of the campus and talks about what university life is like.

"I think my students found it to be a real eye-opener, it gave them a whole new angle on the media that they hadn't considered before," she said.

"They have only ever seen people sitting at desks broadcasting the news on the TV and hadn't thought about all the other stuff that goes around it. It certainly gives them an insight into other careers and areas they can explore."