Winners will now enter the Santander national competition to compete for up to £20,000 in prize money 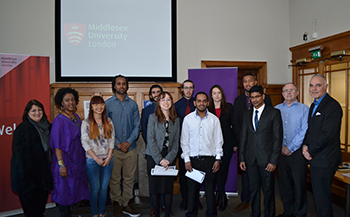 Erdi Debesai and Natasha Collins are the winners of the Middlesex Entrepreneurship Competition 2015.

BSc Herbal Medicine student Erdi scooped the undergraduate prize with his business pitch for Yor Herbal Clinic, while media alumna Natasha walked away with the postgraduate award for Literary Lifestories.

Both will now be entered into the Santander Universities Entrepreneurship Awards – a national competition which offers prizes of up to £20,000.

Erdi came up against stern competition from fellow shortlisted candidates Marlon Spence (Miami Nights) and the duo of Henrique Santos and Mariana Lisboa (OMNIapp) in the undergraduate category, while in postgraduate category Natasha competed with Crispen Rodrigues (Escape Holidays) and Jade Newton-Gardener (IMAP), all of whom had all been selected by internal judges and won a cash prize for taking part.

"It's great to have the support of Middlesex and the EDH, which has been there from the beginning" - Natasha Collins, Literary Lifestories

Both will now receive support from the EDH to prepare them for the Santander competition, where life-changing prizes of up to £20,000 will be awarded.

Commenting on the difference winning a top Santander prize would make to his business plans, Erdi said: "It would be a great opportunity to start my business. I'm chasing a dream and it's a great feeling to win this award from Middlesex."

Natasha was equally thrilled with the prospect of winning the £20,000 Santander award for the top postgraduate entrepreneur.

"I've got an ambitious plan for Literary Lifestories, which would take 20 years to achieve with my current levels of funding. But £20,000 would mean I could fund the next phase of the business, ensuring more peoples' life stories will be told," she explained.

"It's great to have the support of Middlesex and the EDH, which has been there from the beginning. This award is the culmination of dedication, persistence and finally finding my life path."

Commenting on the talent on show during the competition, Director of Corporate Engagement David Williams, whose team organised the event in conjunction with the Students' Union, said: "It is really great to see the quality of applications for entrepreneurship ideas from Middlesex students from across the spectrum.

"The Entrepreneurship Awards are part of our wider partnership with Santander Universities, which ranges from scholarships to competitions and internships. We wish both Erdi and Natasha every success representing Middlesex in this national competition."