As part of The Elders Project at Sadler’s Wells Elixir Festival, Professor Chris Bannerman and Associate Professor Anne Donnelly have been nominated for a prestigious Olivier Award

A performance featuring two Middlesex University dance academics has been nominated for an Olivier Award in the Outstanding Achievement in Dance category.

Professor Chris Bannerman and Associate Professor Anne Donnelly were two of the nine-strong cast of The Elders Project, part of Sadler's Wells' Elixir Festival. This same cast then brought the performance back to Middlesex University for a rendition in front of students and staff.

"For The Elders Project to be nominated for this prestigious Oliver Award is amazing and exciting," said Anne, who is Director of Dance Programmes at Middlesex.

"As part of the cast I feel immensely honoured. I never thought I would have been back on stage after 25 years."

The Elixir Festival brought together a diverse programme of dance events, all of which were curated to celebrate the creativity and contribution of older artists.

As part of the festival, Jonathan Burrows and Matteo Fargion took a break from their renowned duets to Juxtapose electronic music and contemporary choreography in a piece called The Elders Project. 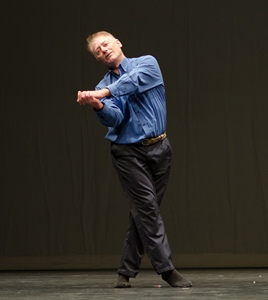 Having worked together at the London Contemporary Dance Theatre earlier in their careers, Anne and Chris "came out of retirement" to perform at the festival, working with former artists of the Royal Ballet, Second Stride and the Siobhan Davies Dance Company.

"The experience of working with such an amazing cast of ex-professional dancers under the direction of Jonathan and Matteo was sheer joy. One that called on our muscle memory to push the boundaries as 'older dancers' – and to reconnect with the essence of performance," added Anne.

The Olivier Awards are widely regarded as the most prestigious awards in British theatre. The winners will be announced on 12 April during a ceremony at the Royal Opera House in Covent Garden, London.

Comedian and actor Lenny Henry is set to host the star-studded awards ceremony, which will entertain household names such as James McAvoy, Gillian Anderson, Kristin Scott Thomas and Imelda Staunton – who have all been nominated in the Best Actor and Actress categories.

Middlesex alumnus and frontman of The Kinks Ray Davies has also been nominated in the Outstanding Achievement in Music category, for his acclaimed musical Sunny Afternoon.

The Elders Project returns to the stage at the Southbank Centre on Friday 24 April.

Find out more about The Elders Project on the ResCen Elixir Festival blog.