She was presented with the award at the University's graduation ceremony today on Wednesday 15 July. 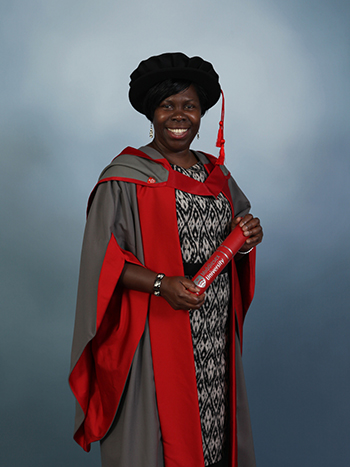 Joan balances a number of roles including nurse consultant for Children and Young People at North East London Foundation Trust and part-time senior lecturer for community children's nursing at London South Bank University, fulfilling her passion of empowering, encouraging and challenging nurses and midwives to excel in their study or career.  She is also the Chair of the Chief Nursing Officer's Black & Minority Ethnic (BME) Advisory Group, advising NHS England on nursing and midwifery issues and raising awareness of health inequalities in BME communities.

Joan's inspirational contributions have not gone unnoticed as she was awarded a Queen Elizabeth the Queen Mother outstanding services award for community nursing from the Queen's Nursing Institute in 2012. She was then honoured with an OBE for services to children and nursing in the Queen's Birthday honours list in 2013.  She was voted one of the top 50 most Inspirational Leaders in the NHS by Health Service Journal in July 2013 and top 50 BME Pioneer in October 2013. In June 2014, Joan was listed as one of the top 50 Leaders in NHS by Nursing Times Journal and earlier this year in May she was awarded the Queens Nurses title by the Queens Nurses Institute.

Croydon-based Joan also has a children's charity in Kenya providing school sponsorship to 25 orphan and vulnerable children, and she also finds time to act as an Ambassador for the Mary Seacole Memorial Statue Appeal.

Joan Myers OBE said: "I am really proud and humbled to be recognised with an honorary doctorate by Middlesex University, it came as a real surprise, totally unexpected. I was a visiting lecturer here ten years ago where I enjoyed teaching student nurses, so it's a privilege to be here today to receive such an honour. I will use this doctorate to continue to challenge, encourage and inspire students to excel and do well in their studies and future career."

Middlesex University Vice-Chancellor Professor Michael Driscoll: "Joan shows nothing but dedication and passion to battling health inequalities in BME communities and empowering young people, so it is no surprise that she is listed as one of the top leaders in the NHS.

"She is an inspiration to our graduates, and nurses of tomorrow, and we are honoured to present her with this award."