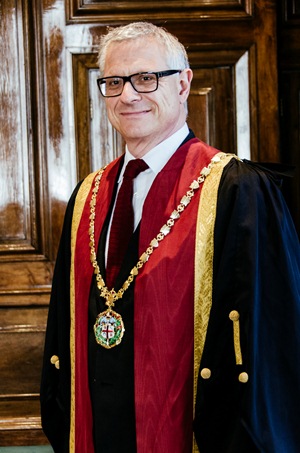 The respected post was awarded to Dr Viner earlier in 2015, with the appointment formally made during RCVS Day, the College's Annual General Meeting and Awards Day, in July.

As Dr Viner took up the post he promised a year of 'continuous improvement' for the Council, and the profession.

He added: "[Continuous improvement] is a very easy term to bandy about, but much more difficult to actually implement it efficiently. It involves accepting that there are many different ways we can tackle the challenges we face, and that we rarely do things perfectly. It is only by recognising our imperfections that we can get better, and it takes courage to open oneself up to criticism."

Dr Viner has been an elected member of the Council since 2005, serving on all but one of the major committees within the Council. In 2010 he was made Treasurer at the RCVS, a post which he held for four years before being elected Vice-President in 2014.

Dr Viner's appointment as President was made after a long and distinguished career in veterinary practice, which began in 1979 when he set up his first animal practice in outer north-west London, just one year after graduating from the Royal Veterinary College.

The newly-appointed President now runs five practices in the area, and was among one of the first veterinary surgeons in the UK to achieve a higher award in veterinary general practice upon obtaining an MSc (VetGP) here at Middlesex University. Dr Viner later returned to Middlesex University to complete his Professional Doctorate in Veterinary General Practice, which he completed in 2006.

Speaking about his latest appointment, Dr Viner told Middlesex: "I became involved in the Royal College because of my interest in post-graduate education for vets in general practice, and the MSc and Professional Doctorate that I undertook at Middlesex University played a major role in developing my understanding of research methodology and work-based reflective learning.

"I have done my best to pass on these important principles within my profession, particularly to recognise and develop the skills that enable a vet in general practice to work more effectively and improve their clinical performance."

On top of his posts at RCVS, Dr Viner is also well-known for his media work, writing for publications such as The Veterinary Times and Your Cat, and he has appeared as the 'in-house' vet for popular programmes The Big Breakfast, Blue Peter and This Morning.

Dr Viner also serves as a Trustee of Battersea Dogs and Cats Home, is the Chair of its Building Committee and is Vice-President of International Cat Care.