A Middlesex University student saw her latest collection on the runway at London Fashion Week, after being nominated in the 2016 Fashion Awareness Direct (FAD) competition. 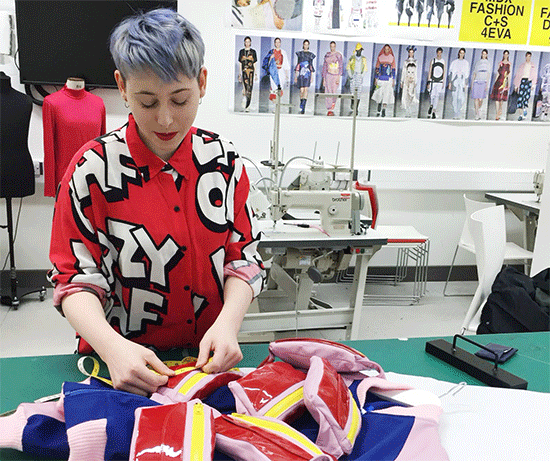 Finalists in their annual competition exhibit their work in front of an invited audience of fashion press and industry professionals, as well as competing for a £1000 prize and a coveted industry placement.

“I am very excited to be involved in the finals of the Fashion Awareness Direct showcase; to have my work recognised in a national competition is a huge compliment,” Emily says.

“I feel incredibly fortunate, especially as an undergraduate, to be given the opportunity of having my designs featured on a runway at London Fashion Week.”

Emily’s collection is a colourful, humorous observation of tourist consumer culture, inspired by a summer working on Carnaby Street in central London.

“During this time I conversed with a lot of visiting tourists. I became interested in observing their behaviour, clothing and spending rituals,” Emily recalls. 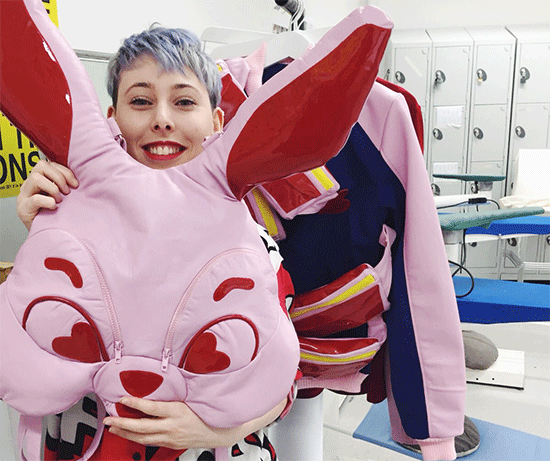 “I also became fascinated by their interpretation of my everyday surroundings and how their perception of London was very different to that of my own or other native Londoners.

“Often I found they were looking to purchase trinkets to take back home as a reminder of their visit. The shop I worked at was a contemporary art shop, We Built This City, which aims to revolutionise souvenirs.

“I began thinking about this as a broader concept and realised how ironic it is that, all over the world, often the only reminder visitors have of the significant location they visited on their trip is a cheap re-appropriated plastic keepsake.

“This is the notion I have explored when designing my garments.”

Emily is one of a succession of Middlesex University fashion students selected for the FAD finals. Past finalists have gone on to work for the likes of Vivienne Westwood, Hussein Chalayan, Burberry, Aquascutum, Jean Paul Gaultier, Coast and All Saints.

FAD is a creative charity supporting young people to bridge the gap between education and the fashion industry.