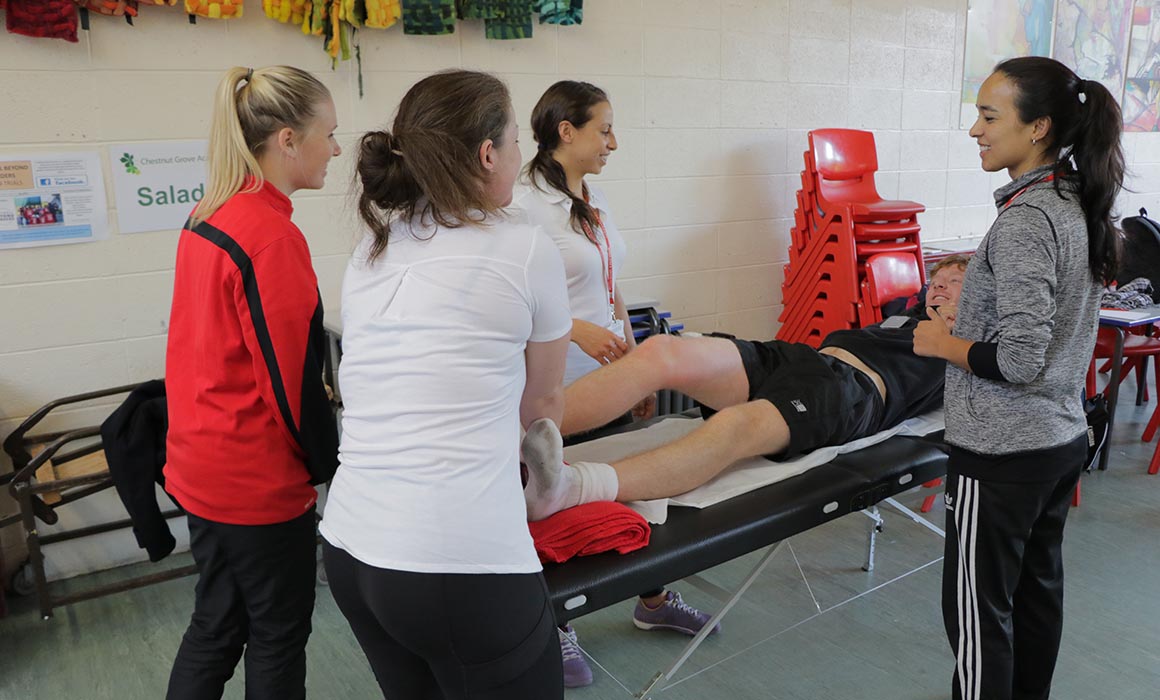 Students and staff from the London Sport Institute at Middlesex University are celebrating after helping a team of footballers break a Guinness World Record for the longest game of five-a-side football.

Over three days last week at the Chestnut Grove Academy in south London the Middlesex team provided massages to the squad of 16 players to enable their legs to withstand nine gruelling five-hour shifts on the indoor court, with only three hours’ rest between each.

The players were raising money for Football Beyond Borders, an education charity which uses football to help engage disadvantaged young people and enable them to achieve their potential. So far the players have raised more than £13,000 and are looking for further donations.

Speaking during a massage session 40 hours into the challenge, Ed (pictured) said he had only had about three hours’ sleep. Associate Lecturer in Sport and Exercise Science (Rehab) Ebony Fewkes (pictured far left) said she expected to see more players getting cramps as they became increasingly fatigued going into the final day of the match.

“Middlesex University were delighted to support the world record attempt and as usual the students on all three of our Sport Rehabilitation and Sport Physiotherapy courses were quick to volunteer to put the hours in for this fantastic charity," she said.

“Our students and staff were on hand to massage the tired legs of the athletes and help keep them going until the end of the event and I am particularly proud of the effort they put in and their contribution to this World Record.”

The players themselves were equally full of praise, commenting: "The students were more than helpful, all had a great attitude and literally made sure our bodies didn’t fall apart. Without them I don’t think any of us would have been able to complete the challenge.

"Massive congratulations from all of us as you were part of this challenge."