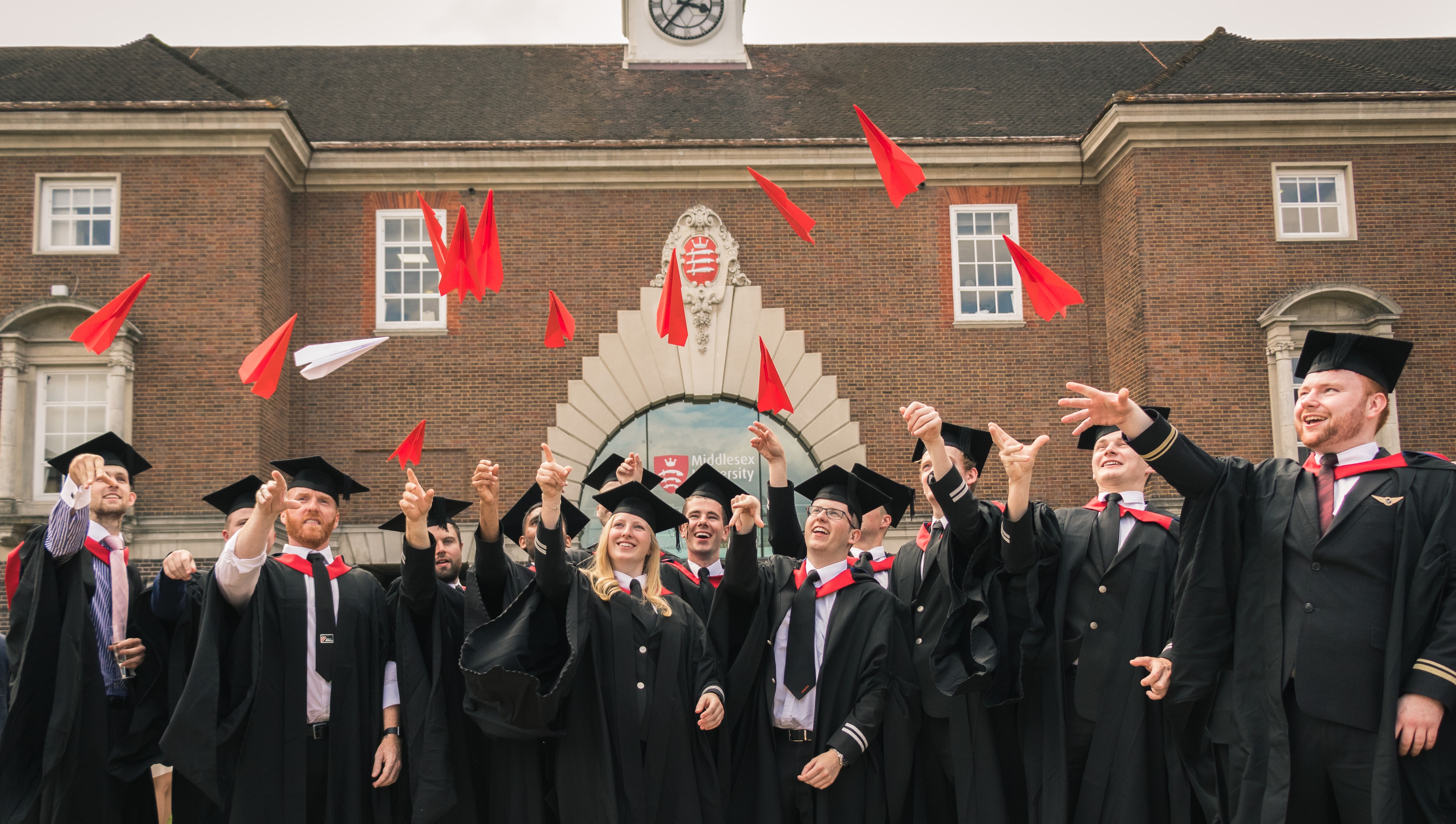 Three helicopter pilots are the first ever to graduate with the UK’s only airline-supported BSc (Hons) Professional Aviation (Helicopter) Pilot Practice degree, delivered in partnership between Helicentre Aviation Ltd and Middlesex University London.

The helicopter graduates – Barry Wilmott, Russell Sheriff and Andrew Thompson – are the only students in the UK to graduate with this degree which is unique to Middlesex University, and designed specifically for helicopter pilots.

The day of firsts culminated with the graduation of Kieran Grimes, a pilot who graduated through a cadet programme delivered by Virgin Atlantic, L3 and the University. Kieran represents the first Virgin Atlantic cadet to graduate on this course, and fittingly he passed his BSc (Hons) Professional Aviation Pilot Practice with First Class honours.

"To graduate with this degree, there quite literally is no feeling like it!”
Virgin Atlantic cadet Kieran Grimes

Professor Tim Blackman, Vice-Chancellor at Middlesex University London said: “I’m very proud of all our pilots whose graduation is the result of a lot of personal effort and commitment to the aviation industry, an industry that needs graduates of this calibre to meet ever increasing skills needs.

“This was possible thanks to our excellent partnerships with organisations such as L3, Helicentre Aviation, easyJet and Virgin Atlantic, who, like Middlesex University, are responding to the increasing need to combine work with practice-based learning and to diversify the workforce. I have no doubt that all of today’s graduates will go on to have fulfilling and successful careers.”

Helicopter pilot Barry Wilmott, 42, from Newcastle-upon-Tyne said: “A degree is something I never thought I would achieve given the age I am. The degree has enabled me to get the helicopter licence – and today has been amazing!”

EasyJet graduate, Isabel Thompson, 22, from Bermuda said: “I wanted to do a degree and I wanted to learn to fly.  My peers on the course decided on flying much earlier than me, from childhood. But for me, I was around 15/16 taking a flight and the captain was female.  I was invited to the cockpit and she really encouraged to follow my dream and that’s what I’ve done."

Virgin Atlantic cadet Kieran Grimes, 23, from Sandhurst, Berks, said: “It’s not an easy road to gain a place with a training school or airline, but it is at the same time an exciting one. It’s a lot of hard work, but trust me when I say that it’s all worth it for that telephone call to say that you have been offered a position, and then to graduate with this degree, there quite literally is no feeling like it!”

Middlesex University London is now looking forward to the new academic year where it will continue its programmes with EasyJet, Virgin Atlantic, L3 and Helicentre Aviation, and will continue to build similar agreements with L3 and other aviation industry leaders.