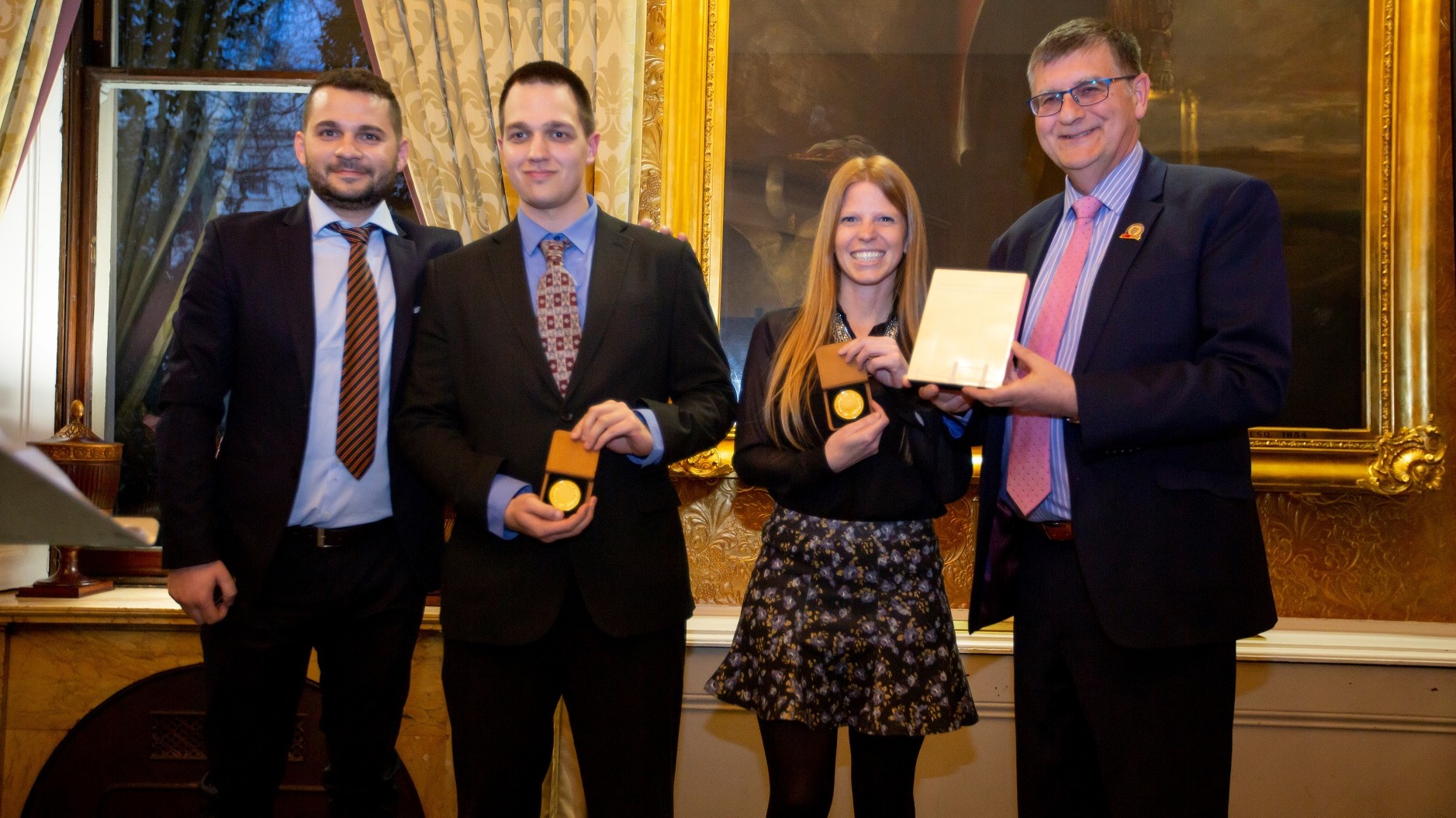 In the final at the Clarence Centre for Enterprise and Innovation at London South Bank University, teams from seven British universities and nine Chinese colleges were tasked with running a virtual business for three years of trading with SimVenture software, then making a presentation about their strategy and experiences to a panel of judges. The Chinese and British teams competed among themselves.

The Middlesex team were 29 year old Jordan Andrews (captain), Carolina Pizzo, also 29, Cristian Dina, 30, and Hamdan Javed, 21, all studying for the MSc in Innovation Management and Entrepreneurship. They triumphed over rivals including LSE and Lancaster University after multiple early setbacks: a loan refusal and a debilitating recession in the game's virtual world, and a computer freeze in the real one forcing them to restart.

Maximising efficiency of their virtual employees, with attention to details such as ensuring only allocated salespeople attend to customers, helped them beat the other UK universities taking part, Jordan believes.

The team gave themselves specific roles matching their strengths, with Jordan and Hamdan focusing on playing the simulation, and Carolina on the virtual company's marketing and comms function and on delivering the presentation to the judges. 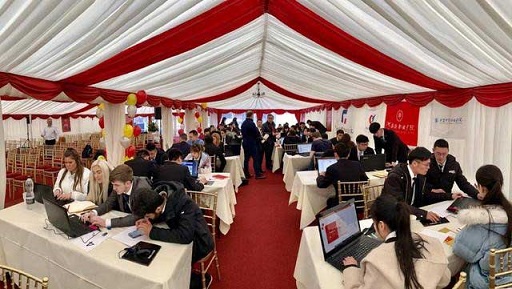 Cristian says that the experience of doing a competition with tight time constraints and surprise market conditions led to "a good feeling that you're under pressure and you're trying to cope with it".

An economics graduate and professional poker player from Romania, he noted there were "a lot of things in common" between poker and the simulation: "you have to be very good at mathematics... you have to know when to risk, when to be balanced".

Carolina, who won an individual award for Most Entrepreneurial Student in the contest, said the simulation shows how well aligned each area of a business must be in its objectives. She found the competition eye-opening about the different ways entrepreneurship is taught in other UK universities and in China.

Having worked in multinationals for eight years in her native Argentina, her experience studying at MDX on a Chevening Scholarship has led her to rethink her career and plan starting her own Argentina-based social marketing business focused on sustainability. "I think it's going to be positive for the country and the region," she said.

Jordan, a former personal trainer studying part-time alongside his job as Deputy Operations Manager of Middlesex's Fitness Pod, is considering becoming a consultant, or starting a business that helps people improve their soft skills.

The students would be keen to take part in more entrepreneurship competitions if the opportunity arises. Cristian has previously won gold in a Royal Horticultural Society business competition at Hampton Court Flower Show. He praised his Middlesex tutors, Senior Lecturer in Eco-Entrepreneurship Dr Chris Moon and Senior Lecturer in Management Dr Simon Best for their "very welcoming and helpful" approach to their subjects.

Peter Harrington, CEO of SimVenture said: "To win Gold at the 2019 International SimVenture Competition Finals is a huge achievement and the whole Middlesex University team, including their lecturer Dr Chris Moon, deserve huge praise. Middlesex were the outstanding British team and were clearly very well prepared for the event".

Chris Moon said the MDX students were a "dream team" and had performed better than any previous UK university side in the competition.

He picked the four for the skills they had demonstrated using SimVenture software as part of the Venture Development module he teaches. "If we just rely on giving students a lecture, they will be passive students. With interactive software, they will learn from their mistakes," he said.

"Middlesex were the outstanding British team and were clearly very well prepared for the event"
Peter Harrington, CEO of SimVenture

Jordan admits he struggled with SimVenture initially in class - "when you first play, you go bankrupt all the time" - but later made £2 million turnover on the platform.

Presenting the awards at a ceremony at the Institute of Directors, Minister Counsellor of the Chinese Embassy's Educational Section Wang Yongli said he hoped China's younger generation "will continue to uphold the scientific spirit of pursuing truth, actively participate in scientific practice, promote innovative culture, and be a pacesetter to implement innovation-driven development".

"At present, China-UK relations are in the golden age. I hope you can continue to work hard and achieve better results in such a good period and atmosphere," Mr Wang said.

Among the Chinese entrants, Beijing College of Finance and Commerce took Gold and Shen Anqi won the Most Entrepreneurial Student award. Dr Chris Moon was presented with an Outstanding Teacher Award.

The British and Chinese contestants were treated to rides on two private hire vintage red London buses for the journey from the finals to the award ceremony. Also present at the ceremony were Ceri Nursaw, CEO of HE sector entrepreneurial capacity-building organisation National Centre for Entrepreneurship in Education (NCCE), Wang Xiaoyu, CEO of NCEE (China), Mike Day, the UK director of China-UK education service provider Sinocampus and Linsey Cole, Director of Enterprise and Innovation at London South Bank University.

The competition is convened by NCEE, and co-ordinated in China by Sinocampus. The competition's earlier rounds are televised in China, where they are watched by an estimated 70 million people.

To find out more about studying the MSc Innovation Management and Entrepreneurship at Middlesex, click here