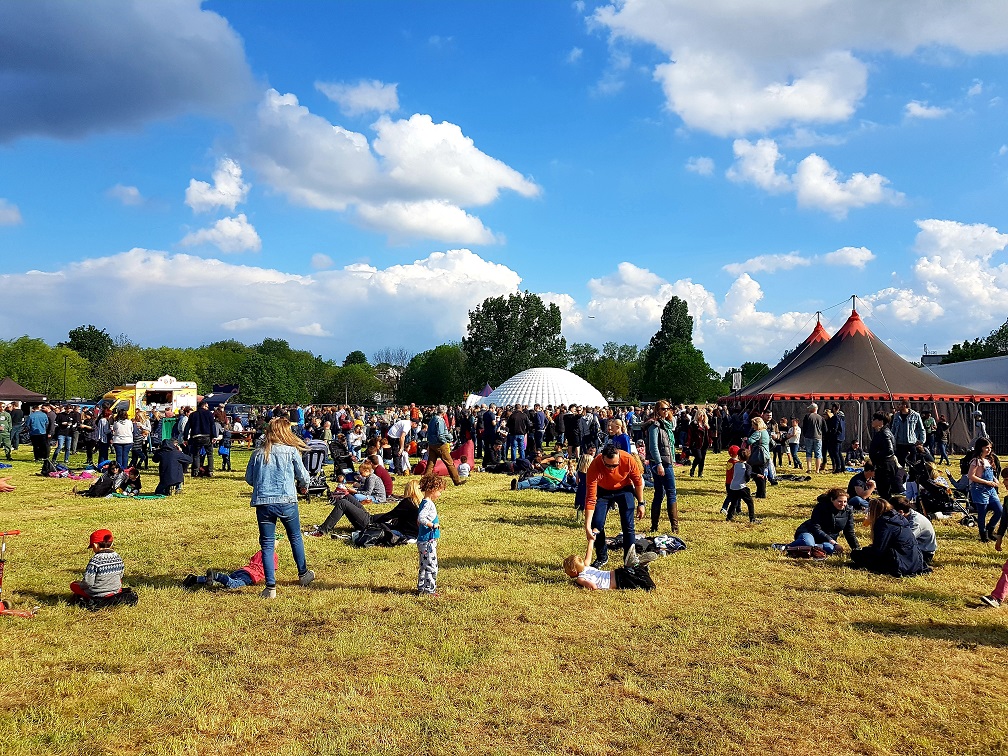 The Hootie was launched in 2013 in tribute to the creator of the Marshall amp, Jim Marshall, who died the previous year. Marshall’s first shop at 76 Uxbridge Road in Hanwell, along with the legendary Ealing Club which hosted the Rolling Stones, Eric Clapton, Rod Stewart and Pete Townshend, give this part of West London a serious rock pedigree. Artists hailing from Hanwell include Jamiroquai’s Jay Kay and the Magic Numbers.

For this year's Hootie on Saturday 11th May, bright sunshine brought around 30,000 people to Viaduct Meadow, Sandy Park, St Mellitus Church and nearby pubs, where they could choose between more than 100 new and unsigned bands. Young four-piece punk band Queensway won a competition to open the event with the customary “Minute of Loud”. MDX second year BA Popular Music student Bruno Giacomazzi, who has built a career as a singer-songwriter in Brazil and now in London, was on the bill at the Fox pub. 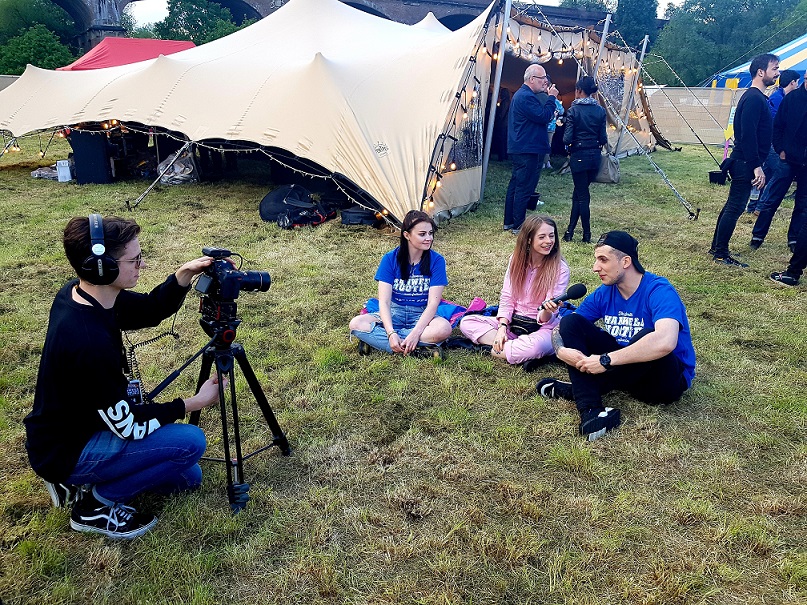 Middlesex has been involved in the Hootie for the past three years since MDX Senior Lecturer Julia Haferkorn and events manager and festival co-founder Faye Hamilton met at a conference. The pair saw an excellent opportunity in the Hootie for Middlesex students to gain experience at a major live event that would stand them in good stead for applications for jobs in the music industry in future.

“The festival is all about young and emerging talent, and our passion to support it” says Hootie co-founder June Martin. The event is volunteer-run and supported as a community asset by local businesses, charities and Ealing Council. “It's a unique relationship [with Middlesex]. Julia is facilitating something very special” adds Faye.

Third year Music Business and Arts Management student Krzysztof Bryll, who volunteered at the Hootie in 2018, managed the food vendors this year. He approached 50 different companies to choose 14 who would fit the festival vibe and cater for every taste.

“I really, really wanted to experience the whole process” he says. “It was a great opportunity to convert my knowledge into practice”. A Pink Floyd and Foals fan who is a drummer in several different bands, Krzysztof worked on festivals in his native Poland from the age of 12, although before the Hootie he thought he wanted to go into the recording side of the business.

He has loved his experience studying at Middlesex, he says  – the quality of the facilities, having "space to study [and] people to bring our ideas to life. I could find help on any level I wanted.”

Third year Becky Merchant was in charge of artist liaison, handling contracts for all the participating bands and needing to chase artists who were slow at coming back to her (the secret is in “the way you word your emails” she says).

Growing up in Harrogate, she always wanted to come and live in London, and says she’s knows she’s “destined to work in the music industry, it’s a case of still finding my path”.

“It really excites me that there will be jobs in music that don’t exist now - I think I will end up doing lots of different jobs”, she says.

Third year Micah Sardinha was co-ordinator of the Wall of Sound by the festival entrance, working closely with June Martin on the project, having previously been a volunteer at the Hootie in both her first and second years as a student. "The whole day was just a blur from running around" Micah said. "It's a great to see what you've been working on for the last couple of months all happening".

A John Mayer fan who grew up in the city of Conway, Arkansas, she's valued the practical learning experiences Middlesex has offered, and the sheer number and range of music events available to her in London. In terms of major artists, "you can practically see anyone you want to" she says.

Second year Aidan Hepworth, who provided support for a London Live crew filming at the Hootie said, “I knew experiencing a live event was something I wanted to do. It was really good to get a behind-the-scenes view”. He’s interested in pursuing music journalism and particularly admires Peter Robinson of long-established pop music blog Popjustice.com. 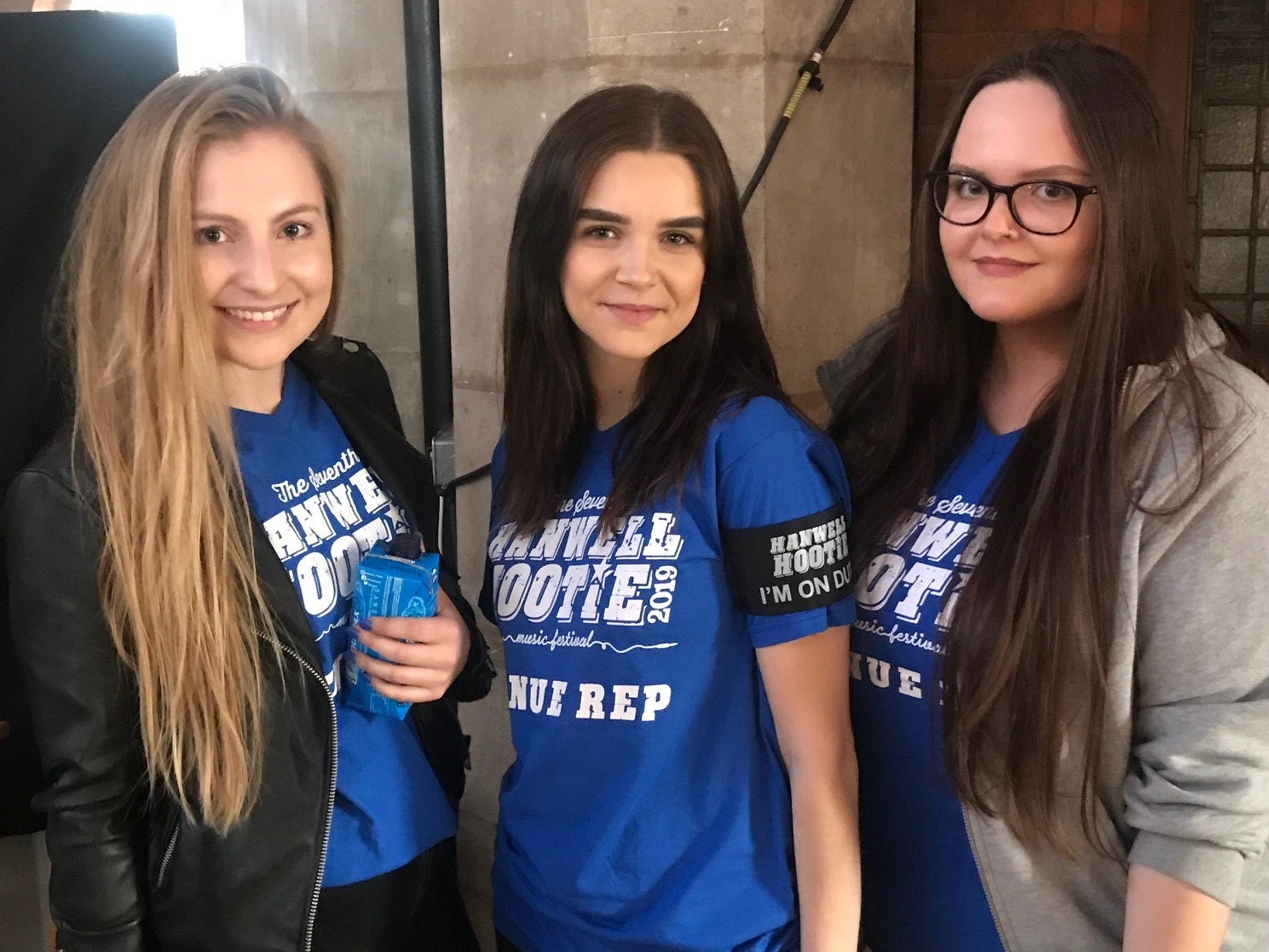 Up the road at St Mellitus, three third year Music Business and Arts Management students were helping to manage the stage and outdoor areas. “It’s super unusual to have a gig in a church” said Paula Jamrichova. “It was very challenging at the beginning" said her teammate Michaela Donnerova. "It was up to us to figure out the situation. It’s a great experience, and the acoustic is really nice”.

“We’re doing so many fun things I haven’t done before” said Cristiana Silva, a first year who worked as a venue rep in busy central venue the King’s Arms. At Sandy Park, which was so popular it had reached capacity by 5.30pm with a long queue waiting outside, first year Kasia Michta was working as site manager. “It’s amazing, I really enjoyed being here,” she said. “It’s really encouraged me to work with people”.

“The practical experience the students gain at the Hootie, from dealing with artists to managing crowds, is invaluable and, in a several cases, has directly led to graduates securing jobs in the music industry” says Julia Haferkorn. “Seeing them put into practice what they learnt at university is very rewarding. I’m incredibly proud of the students and their work this year”.