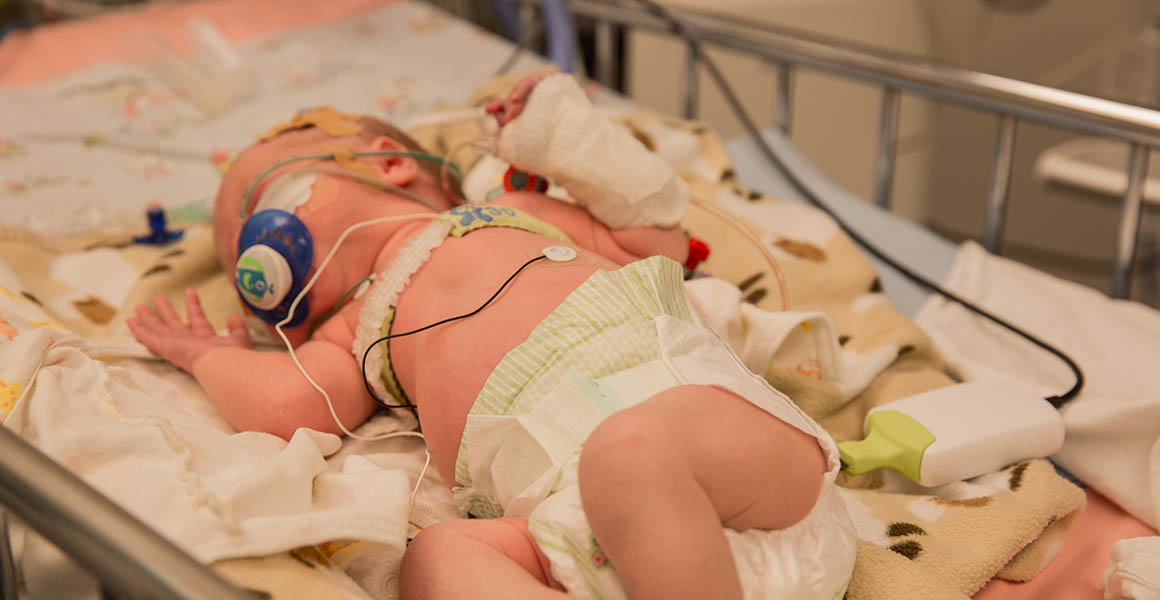 Middlesex University academics are leading major international research to save millions of lives by creating new technology that will mean that for the first-time doctors can accurately monitor babies’ lung function without the need for sedation. Allowing neonatologists to view real-time dynamic images of babies’ lungs every second could prevent many infant deaths in the future.

The wearable imaging system which analyses breathing in children and infants will be trialled at two hospitals: the Royal Hospital for Children in Glasgow and the Oulu University Hospital in Finland.

The Engineering and Physical Sciences Research Council has funded the PNEUMACRIT research project which follows on from the three year CRADL study that received funding from the European Union’s Horizon 2020 research and innovation programme. This project was also led by Professor Richard Bayford, Director of Biophysics at Middlesex University.

“Every year around 15 million babies are born prematurely with many suffering respiratory failure due to the immaturity of their lungs.  This fantastic and low-cost technology that monitors infants’ breathing in real time has the potential to ensure serious respiratory problems are averted and that lives are saved." Professor Bayford, Middlesex University

CRADL used a wearable electrical impedance tomography (EIT) that enabled doctors to use continuous information and images to monitor the breathing of premature babies and alert them in real time when interventions were needed. EIT is a non-invasive, radiation-free technique that images an object by injecting tiny currents through electrodes on its boundary, and measures the resulting potentials developed on the same or other electrodes. This process permits the estimation of the distribution of the inner conductance (impedance) of the human physiology. The use of CT carries the risk of overexpose to X-rays which is not premised in infants and children.

PNEUMACRIT goes a step further and provides a multi sensor wearable imaging system and activity image lung function for diagnosis in infants and children with conditions that can lead to respiratory problems. Although respiratory support, especially mechanical ventilation, can improve their survival, it also may cause severe injury to the vulnerable lung, resulting in chronic pulmonary morbidity lasting into adulthood. Such monitoring is crucial because of the millions of babies across the world that suffer from respiratory failure every year due to immaturity of the lung or infectious diseases.

Commenting on the research project, Professor Bayford said: “Every year around 15 million babies are born prematurely with many suffering respiratory failure due to the immaturity of their lungs. This fantastic and low-cost technology that monitors infants’ breathing in real time has the potential to ensure serious respiratory problems are averted and that lives are saved.

"CRADL was the first step and now we are delighted that the EPSRC has funded further study and that two world class hospitals are involved in using the technology.”

The technologies within the new project will enable multi-site recordings, without the need for physical interconnection and integrated power supplies, opening the door to a new generation of diagnostic wearables.

Find out more about studying Biomedicine at Middlesex.