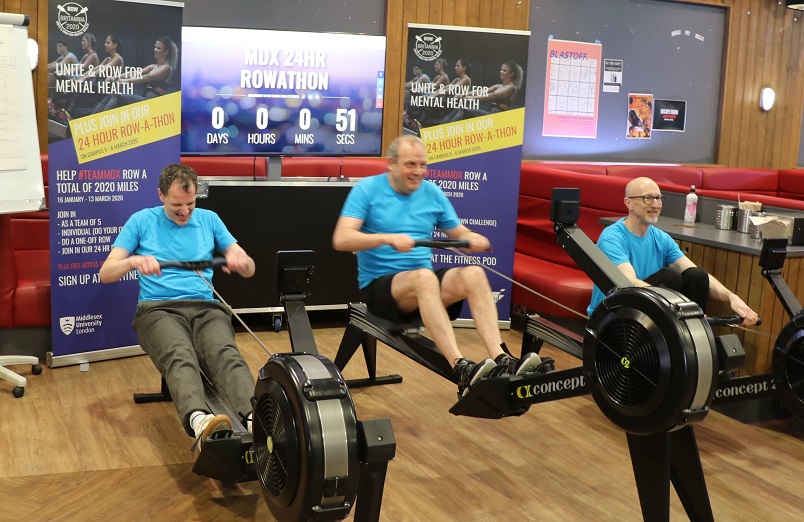 A team of students, staff and Vice-Chancellor's Executive members between them clocked up 316 miles on rowing machines on Thursday and Friday, helping MDX on its way to completing a challenge for Sports Relief.

The 24 hour Rowathon in MDX House came in the final stages of MDX's eight week 2020 Row Britannia Challenge. Universities participating have a target of completing 2020 miles on rowing machines and raising £3000 for mental health charities in support of students and young people.

Charity fundraiser Phil Packer, who created the Challenge, came to watch the final hour of the Rowathon and said it was an "absolute pleasure to visit. Middlesex have wholeheartedly embraced the challenge and it was great to see the Vice-Chancellor and staff rowing with students".

Around 50 members of the university community took part in the Rowathon, with some students sleeping through the night on sofas in order to keep at least one rowing machine going at all times. One keen participant "came in at 5.30am, as soon as public transport was open", says Sports Operation Manager Ben Southwood.

Partnership Services Assistant Sofia Atsopardi, who did two hour-long stints, said “It was exhausting but really nice. When I came in this morning, Ben had been here since 2am and he was radiating happiness. That’s to show you the vibe there was here”. 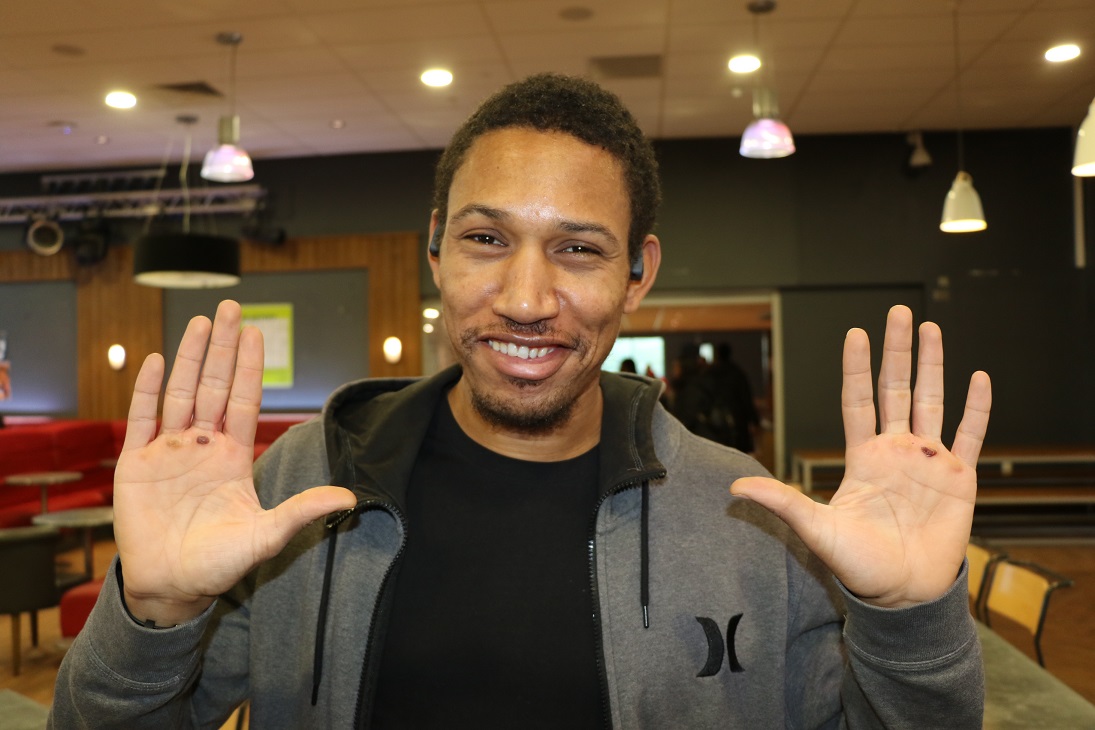 Sofia's colleague in Registry Kyle Lemuel, who also rowed for two hours, said: “I have blisters to prove I worked that hard".

Nic, a rowing novice, said the experience was "quite relaxing when I got into the rhythm of it”, while James said: “I rowed years ago at the lowest level it’s possible to get. It’s always been a fun activity”. Nic Tweeted: "The @RowBritannia  challenge is raising money for mental health. Funding for mental health in the UK is insufficient - it's time we came together to address and improve it". James, Sean and Mark are among the MDX team members who have been rowing since mid-January in the eight week Row Britannia challenge. 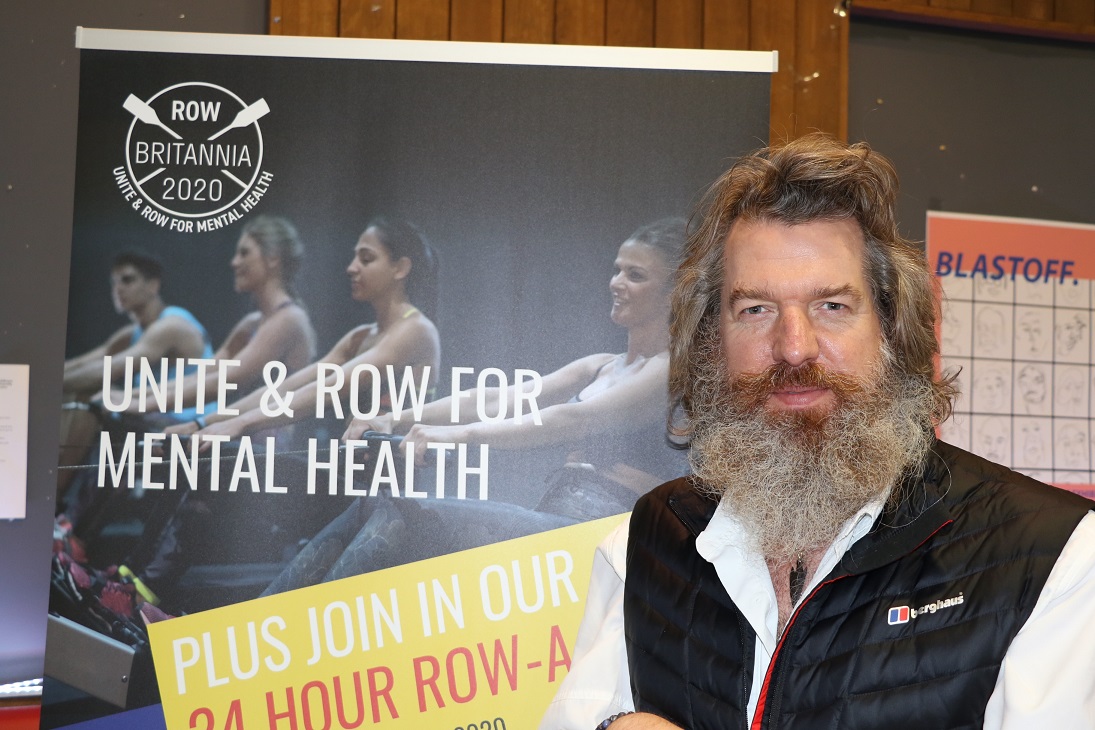 Phil Packer was a British Army Major who suffered catastrophic spinal injuries in a rocket attack while serving in Iraq in 2008. Having initially been completely paralysed below the waist, he gradually recovered his mobility, accomplishing feats such as Marathons, scaling El Capitan and skydiving with the Red Devils along the way.

Phil created Row Britannia as "an inclusive (adaptive sport) mental health, fitness and wellbeing challenge by The British Inspiration Trust, for every university and college throughout the UK to raise vital funds and positive awareness between 12 November 2019 and 6 June 2020".  If every higher and further education institution takes part and hits its target, £1.5 million will be raised. The charities that will benefit are PAPYRUS, Charlie Waller Memorial Trust, Student Minds and the Matthew Elvidge Trust. Uni Mental Health Day on 5th March has been marked by student activities, YouTube contributions and social media conversations at MDX this week. 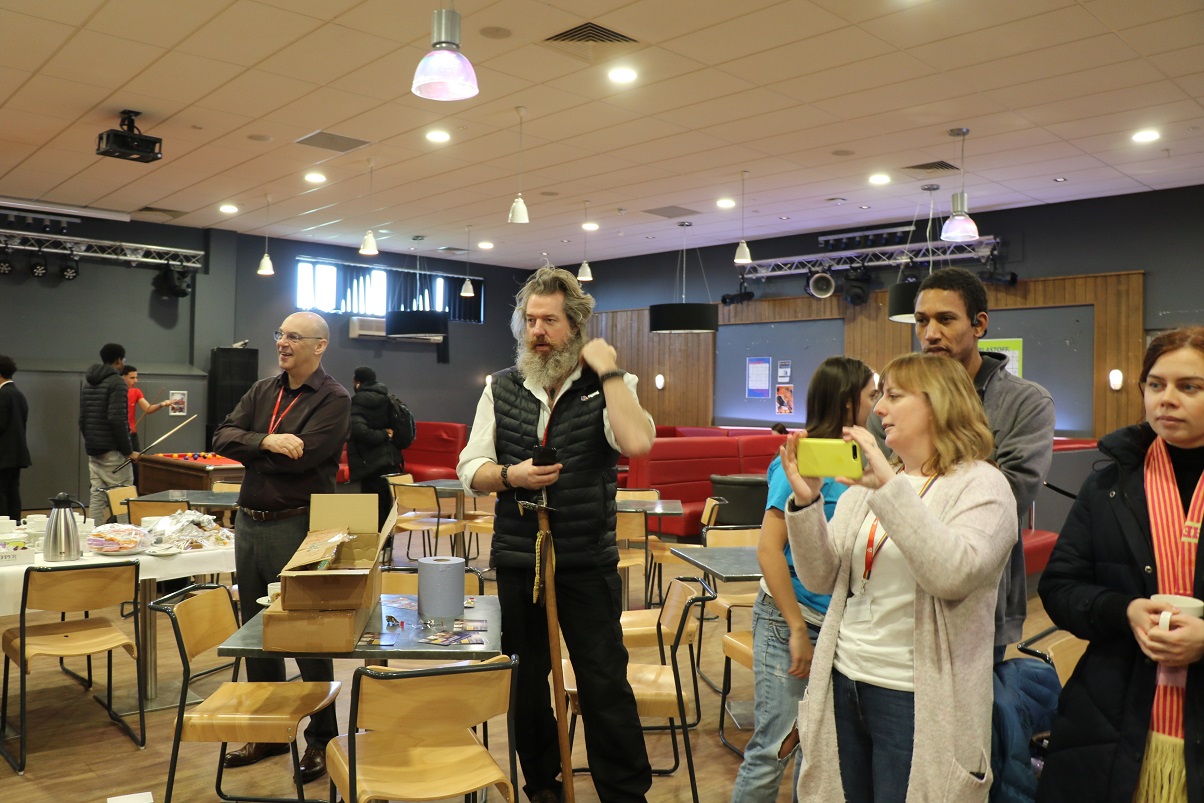 Acting MDX Library and Learning Spaces Manager Annette Daneman, who brought together a team of five for the 8 week challenge said, "We wanted to support Middlesex in reaching its target and hoped it would motivate us to get a bit of exercise as well. With our jobs, a lot of us are involved with students face to face, so we are aware how important student mental health is. Some of us have children at university and appreciate what this support would mean”.

Annette's teammate Ben Adenaike, who has never rowed before, says that his main motivation for taking part was supporting the cause, and "somehow along the line it became a personal challenge as well. It was an opportunity to get back in the swing of things, to get healthy," he adds. "I actually love it".

Click here for the MDX Row Britannia team JustGiving page. Universities and Colleges still have time to register teams for the Row Britannia challenge at www.rowbritannia.org.uk