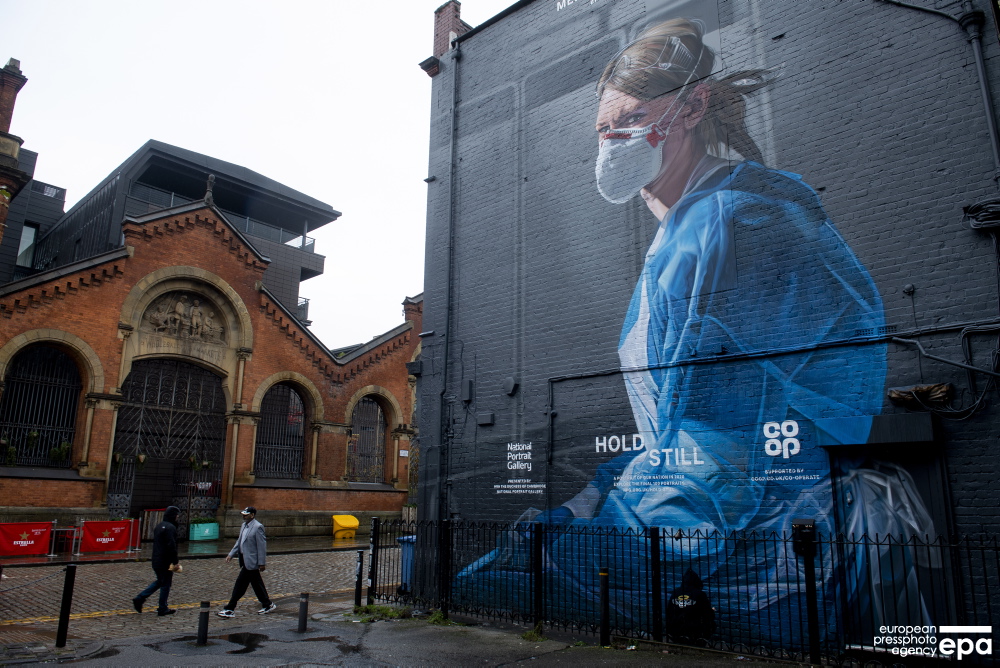 A MDX photography alumna and nurse is behind a defining image of Britain's resilience in the face of the pandemic.

Johannah Churchill's photograph of nursing colleague Melanie Senior which has been turned into a giant mural on a building in Manchester's Northern Quarter was originally commissioned for a feature on frontline female medics in the Sunday Telegraph's Stella magazine supplement. Then it was chosen among 100 finalists in the Hold Still project, led by the Duchess of Cambridge and the National Portrait Gallery and sponsored by the Co-op, which set out to create a collective portrait of the UK during lockdown.

This incredible hand-painted mural of the portrait, Melanie, March 2020 by Johannah Churchill is on display in Manchester’s Northern quarter as part of the #HoldStill2020 community exhibition, supported by @coopuk. Discover more & find your nearest display https://t.co/BLUHA65pzNpic.twitter.com/AyV5fJI2JW

As well as the Manchester mural, Johannah's image features in a physical display of the exhibition outside Waterloo station and in adverts across the London Underground network, in Putney, Balham, Croydon and Wimbledon, and on Co-op digital screens around the country. The Guardian and the Financial Times ran a photograph of the mural on their front pages last week, and the Duke and Duchess of Cambridge’s social media accounts posted a timelapse video of it being painted. “We are proud to show you this incredible piece of artwork” @kensingtonpalace announced on Instagram. “It is one of the final 100 images and represents the #holdstill2020 community exhibition. With the support of @NationalPortraitGallery and @CoopUK, this amazing mural brings Hold Still to the streets of the UK, demonstrating the support for the NHS community”.

The image shows a seated Melanie, who works with Johannah in south-west London, staring at the viewer wearing PPE and a face mask after readying infection control procedures for the opening of a Covid clinic in the early stages of the pandemic in March.

Conditions at the time, Johannah says, were "extremely different. Anxiety levels were so high among patients and staff and throughout the nation. Our job roles changed so quickly, and information changed every day". 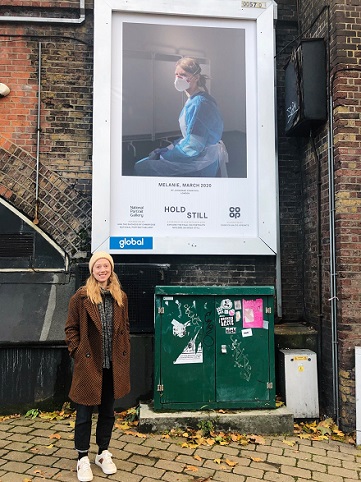 Johannah studied Photography at MDX from 2010-14, having previously worked as a staff nurse in a busy London hospital. She chose MDX, she says, after attending the degree show and been "blown away by the quality of the work".

She praises her lecturers for being "so rigorous in their teaching and passionate about what they do. I felt like there wasn’t a stone left unturned in tutorials". She's become close friends with portrait photographer and lecturer Eva Vermandel and considers the department as a whole to "be part of my extended family". She mentions technicians Alexander Missen for zoom-coaching her in post-production for three images for Stella, and Rob Crow, who regularly gives her technical and equipment advice.

Nursing and photography share a common focus on “people, communication and trust”, Joahnnah says. "In both jobs people give a bit of themselves over to you" she adds. "You have to be very responsible with what they give you: it is a privilege".

She has met and taught a lot of students in her nursing career and says it feels odd to have a mixture of identities as a student and as a teacher. "I’m all for cross sectional learning" Johannah says. "It’s important for nurses to have an outlet - it’s an emotional job. The arts can really support that".

Eva Vermandel says the combination of Johannah's high quality photography, personal insights and the practical access she could provide as a nurse made her "a perfect match" for the Stella magazine commission. "It's easy to forget that, back in March and April, it was virtually impossible to gain access to a hospital or GP surgery unless you were a patient or worked there," she says.

The project was commissioned by Stella magazine's art director Jason Morris, who had seen Johannah's graduation show at Old Truman Brewery in 2014 - a series of portraits of NHS staff which were selected for the Telegraph’s graduate photography showcase at the time. "The fact that Jason played such a key role in this and that there was a 6 year gap between him viewing the work and this commission is quite a beautiful detail" says Eva. "It shows how vital having a strong platform to show the student's work is in the long as well as the short term".

"It is fabulous that an opportunity like this has come about as a direct result of our external degree show," says Senior Lecturer Steven Barritt. "It is the incredible hard work and dedication of the technical team who go above and beyond, and the way we can support students by working together which is I think the key to our success".

Associate Professor of Photography Michael Bradley says Johannah showed a very strong talent for documentary photography and editorial portraiture from the moment she arrived at Middlesex to study for her BA. She was awarded a scholarship and went on to enroll on the MA programme, which Michael supervised, for which she produced a body of work weaving together photographs from London and the North-East of England: friends and family, urban and rural landscapes. "Through her choice of subject matter, her empathy with others and her highly sensitive photography, I believe Johannah perfectly fits the definition of the concerned photographer," Michael says.