Affairs of the Art and Night of the Living Dread, directed by MDX graduates, make up two-thirds of the shortlist for Best British Animated Short BAFTA 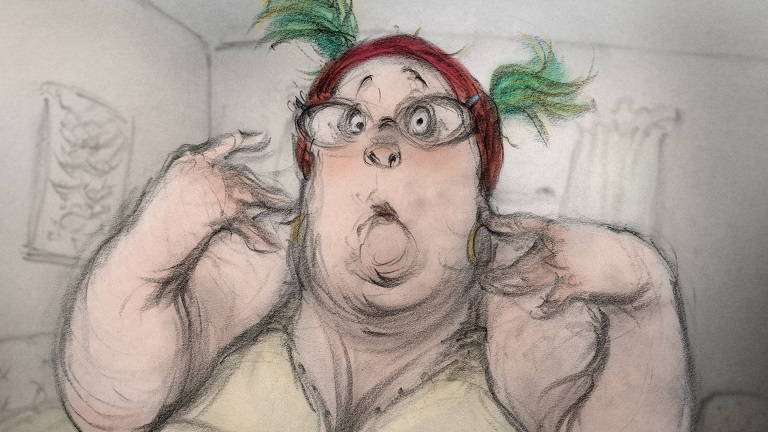 In a major coup for Middlesex’s Faculty of Arts and Creative Industries, animated films directed by MDX alumni Joanna Quinn and Ida Melum have scooped nominations at both the BAFTAs and the Academy Awards.

Affairs of the Art, directed by Joanna and produced by her partner Les Mills, who taught at MDX, has been shortlisted for a BAFTA for Best British Animation Short, and an Oscar for Best Animated Short Film. The 16 minute film is the pair's fourth about indomitable Welsh housewife Beryl, a character created by Joanna at MDX who has recurred throughout her 34 year career; this time with a focus on Beryl’s quirky relations and the story of her artistic ambitions.

Joanna and Les have won a slew of awards for their films and commercials, including four BAFTAs and three Emmys, and have previously been nominated for Oscars for Famous Fred (1997) and Wife of Bath – Canterbury Tales Part 1 (1998). Affairs of the Art has already won 25 international awards including a Jury Award for Special Distinction at the Annecy Festival. 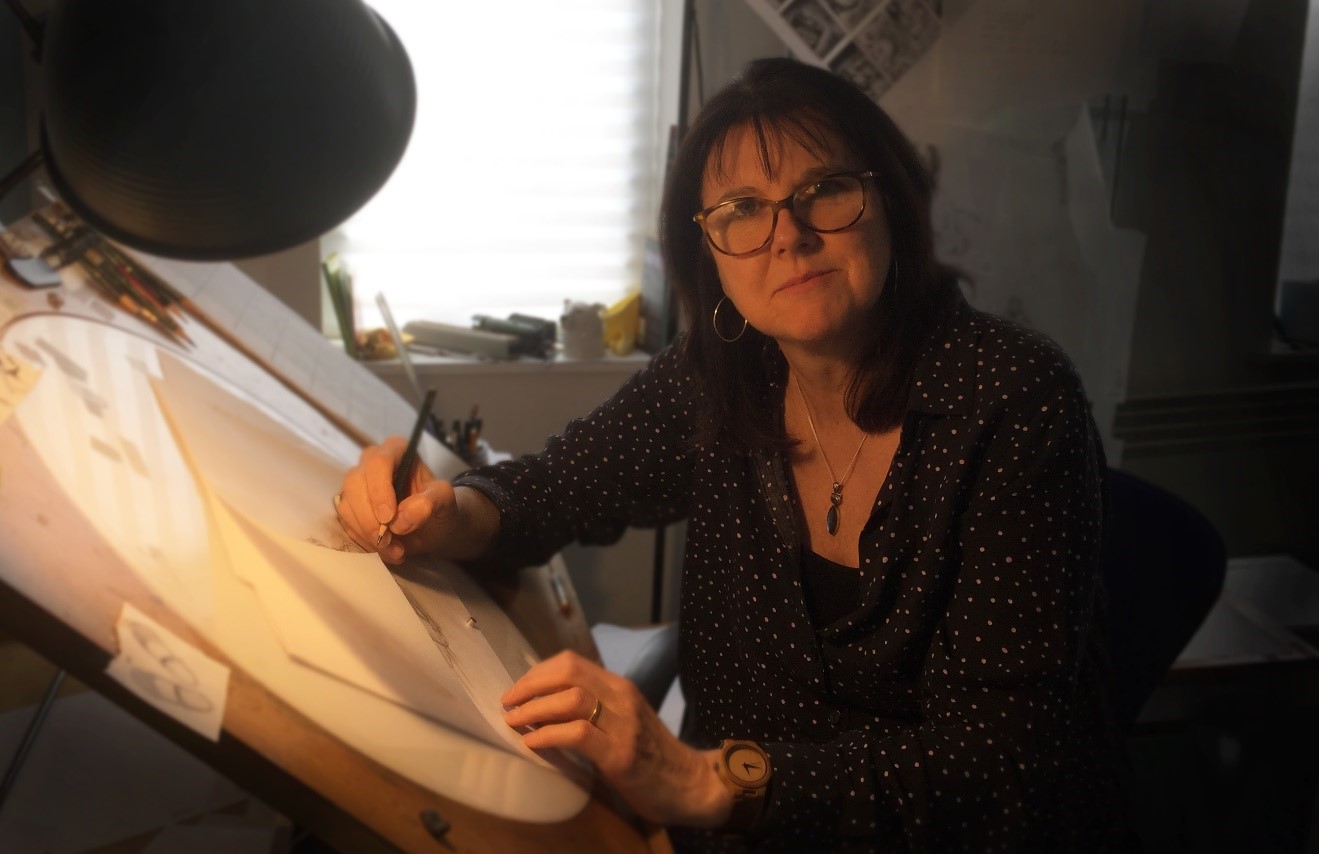 Joanna went to MDX to study Graphic Design from 1982-85, where her contemporaries included Peppa Pig co-creator Neville Astley and Aardman Animations’ Jeff Newitt. She “really, really enjoyed her time” in a heady creative atmosphere, where “everybody had mad hair” and the open-plan building design sparked ideas between disciplines.

After her first experiences making animations in her first year at MDX, Joanna says “I knew that's what I wanted to do”, and she reflects on “how important MDX was to everything” in her subsequent career. Girls’ Night Out, the original Beryl film, was her final year project.

Beryl was inspired partly by Joanna’s mum and partly by an MDX staff member who worked at the refectory at Cat Hill campus, where the Graphic Design programme was based.

“She was this wonderful solid figure  – people would gravitate towards her for a bit of comfort and bit of down-to-earthness”. Beryl was a product of the fact that Joanna “wanted to be feminist and political, but I’m naturally a humourist… I thought just by making a female character strong and relatable, that’s a political statement in itself".

MDX's head technician at the time, Phil Davies – who went on to create Peppa Pig with Neville Astley and MDX lecturer Mark Baker – was a big influence: “an enabler, incredibly positive and excited by everything the students were doing”. Joanna’s creative process of keeping big sketchbooks filled with ideas for her characters also came from MDX. 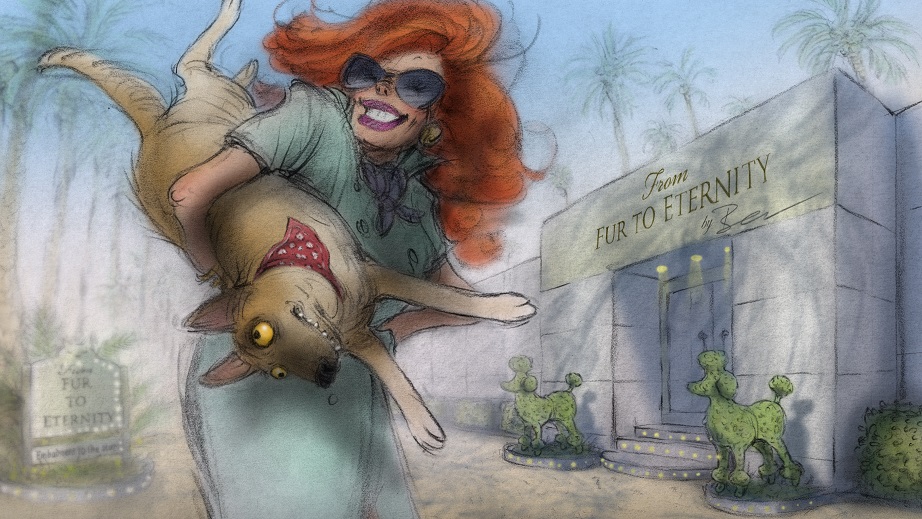 Les came from a background of teaching fine art and making documentary films – he taught Joanna at Southgate Technical College before she went to MDX.

He urged his students, who also included current MDX lecturer, animator and ad designer Osbert Parker, to work quickly and experiment. On the Beryl films, he draws many of the characters and comes up with ideas. “We spend endless months figuring out what Beryl is going to end up doing" Les says. "We have an idea when we finish one film about the next one”.

Affairs of the Art, entirely-hand drawn like the earlier Beryl films and featuring an estimated 15,000 drawings, took “a relentless six years” to make, with for instance Joanna "lip syncing" to sketch out the movement of the characters' mouths.

It was originally self-funded from the proceeds of the couple’s 10 years of work on US commercials since their previous Beryl film; then the National Film Board of Canada came in as co-producer. Next project, Joanna says, will be “something very simple, that will just be about the enjoyment of drawing”.

Joanna’s advice to young animators is “to not be fearful, to take risks. Use that period of time when you’re a graduate to make the biggest decisions in your life, to do the maddest things, because very quickly you start to get responsibilities, time goes by very quickly”. Les tells them “not to be afraid”.

Stop motion animation Night of the Living Dread, a dark comedy about a woman who can’t sleep and is haunted by past versions of herself, is nominated for a BAFTA in the same category as Affairs of the Art. 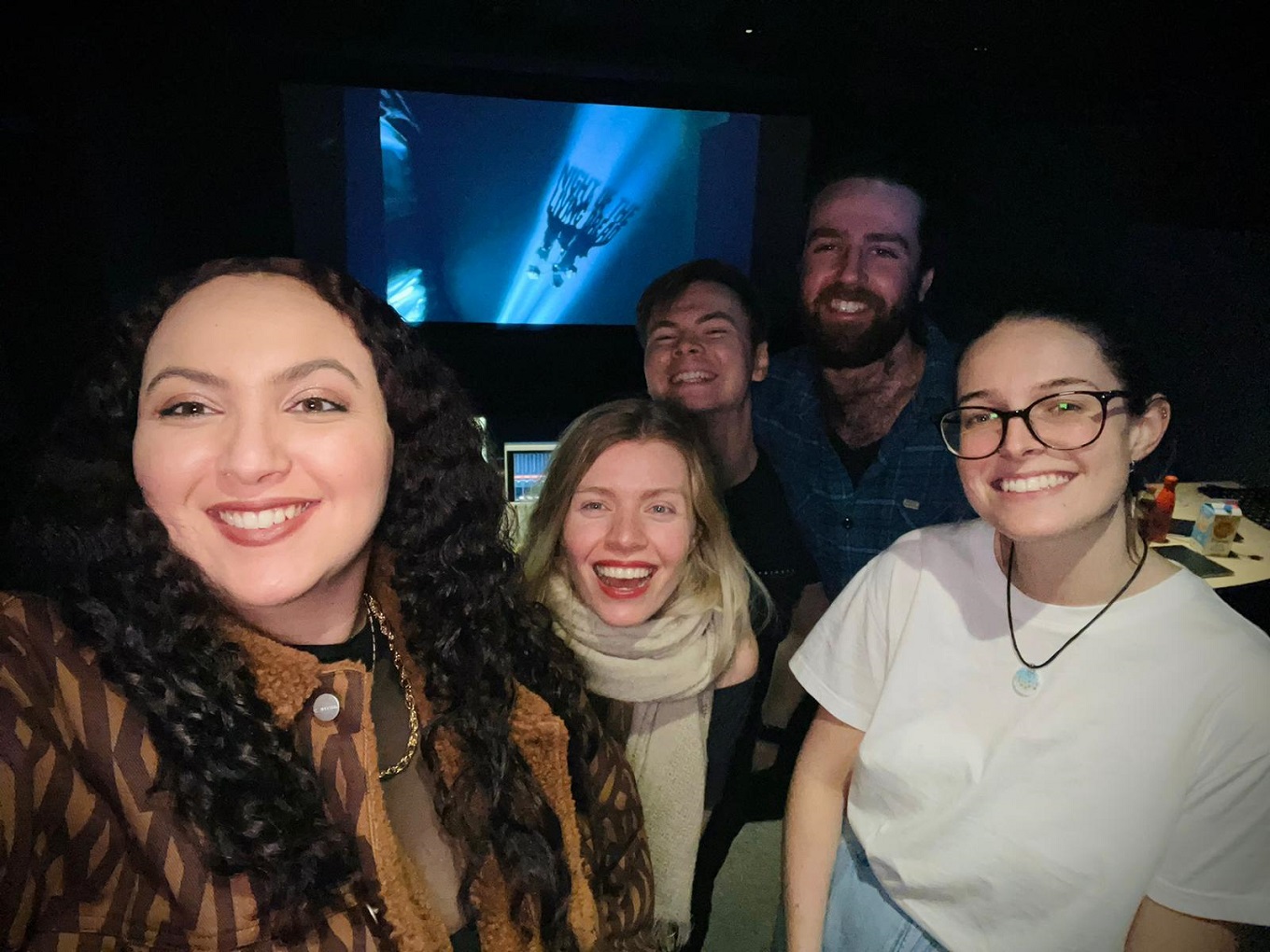 Director Ida Melum, who grew up in Norway and is now based between Sweden and the UK, says she has “always loved film-making and art, but it never occurred to me to be a career” until she started looking at Animation courses. “It was the medium that really clicked with me. I was never a big drawer, but building stuff and animating, that was really fun,” she says. The storytelling element excited her most, fuelling her ambition to go on to the National Film and Television School (NFTS) where she did her Masters. 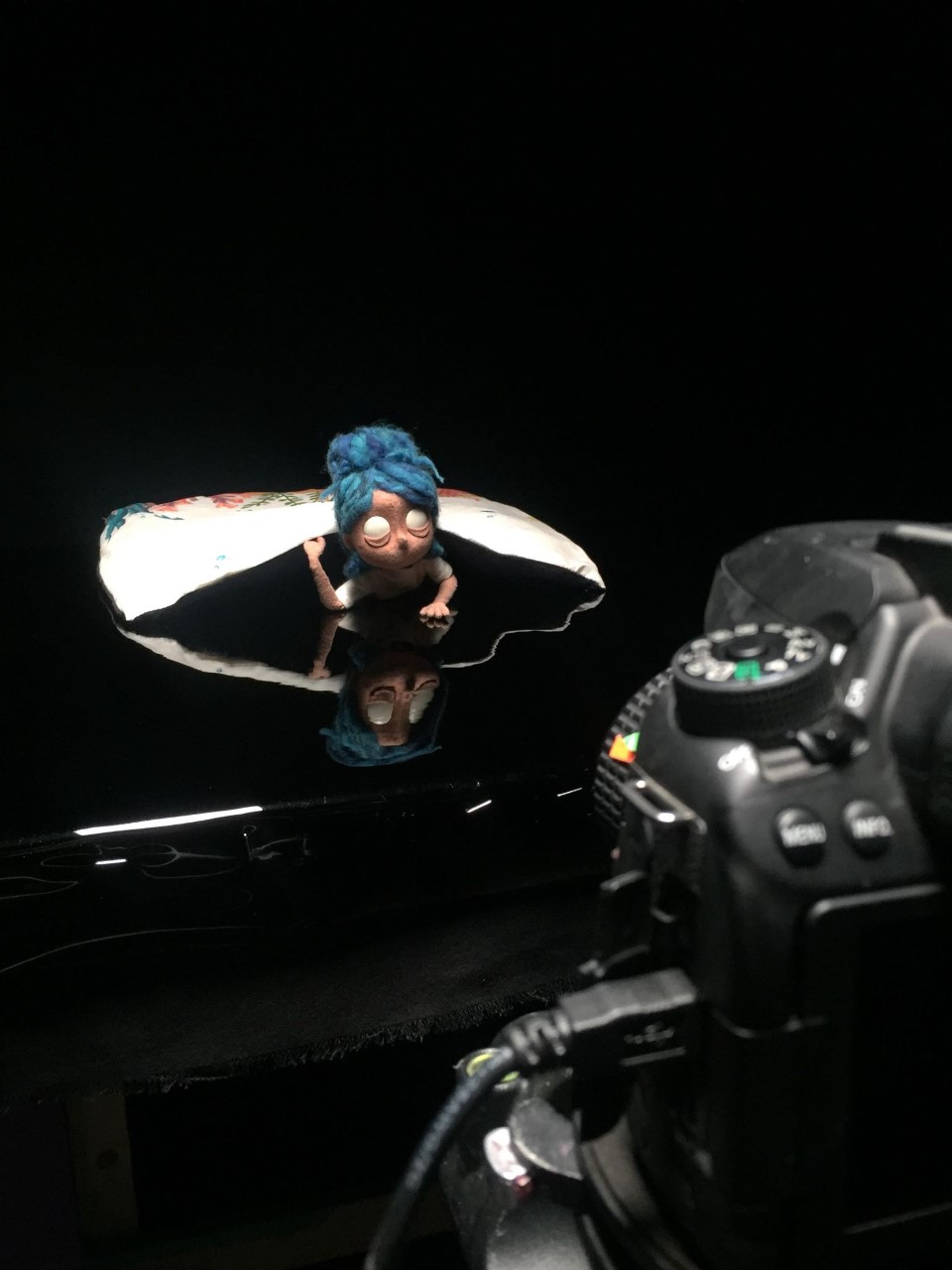 She found MDX “really inspiring”. The practice on the MDX Film course of students making films on their own means that “later on, when you get a team, you have a big respect, understanding and gratitude for what each department do,” she says. Fellow NFTS alumnus Antonin Niclass, director of Do Not Feed the Pigeons which is the third film in the Best British Animation Short category, is a close friend and was Ida’s flatmate while she was working on Dread.

“I’m really excited - I’m genuinely a massive fan of both [Joanna and Antonin’s] works. I feel like I’m in good company” Ida says.

Ida names Ainslie Henderson and 2015’s MANoMAN by Simon Cartwright as influences. She watches a lot of thrillers and true crime – “which is funny, because my films are nothing like that at all”. 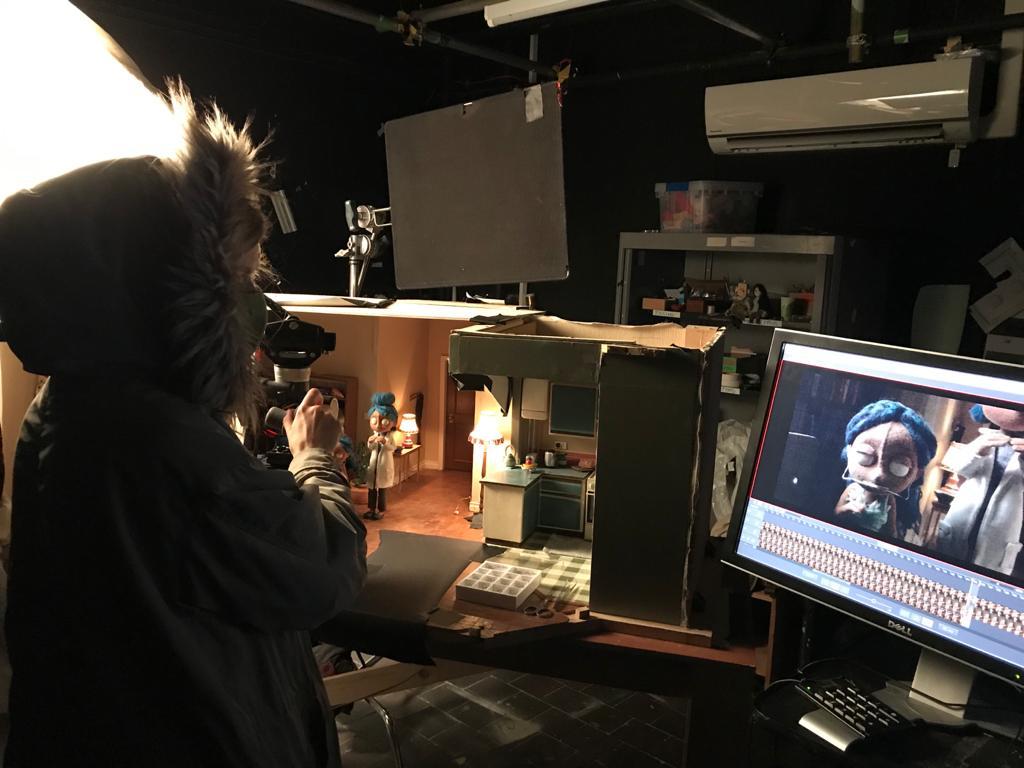 The themes of overthinking and self-acceptance in Night of the Living Dread are things that Ida has personally grappled with. She says: “I like the idea of making films about stuff that many people can relate to. We can all recognise ourselves in a bad night’s sleep or your thoughts consuming you a bit. It is the small embarrassing moments that keep us awake”.

The film is the biggest scale animation project she’s worked on to date, with MDX graduates at NFTS among the crew. “For a long time I tried to please everyone with my film, and then I thought I can’t really do that. When I realised that, it got a bit easier”. Another challenge was making a light-hearted film at the height of the pandemic, with limited opportunities for feedback until a late stage in the production process.

The film has won two audience awards, the Young Talent Award at Slovenia's Animateka International Animated Film Festival plus the prize for Best Animated Film at Norwich Film festival. It was nominated for a British Independent Film Award and a GSA Bafta Student Award, and is on the shortlist for the 2022 Annies (ceremony to be held on Sunday 27th February).

“It’s so lovely to know audiences in different countries are enjoying it,” Ida says. She is currently developing another animated short called Ovary-Acting, about a woman being confronted by her ovaries - Ovie - about whether to have children or not is right for them.

Ida gave a workshop to MDX students on 15 February about the lessons she learned doing her MA, including the things that can go wrong when working on a production, which she feels isn’t something that is discussed enough. Chatting to the students afterwards, she was pleased to find that her advice seemed to have been relatable and to have hit home.

To find out more about studying BA Film at MDX, click here