“Put yourself out there because if you don’t ask, you don’t get; be authentic; ask for help; and create relationships and bonds," star nursing graduate Sianne Chinnoyelum Chinwuba advises students 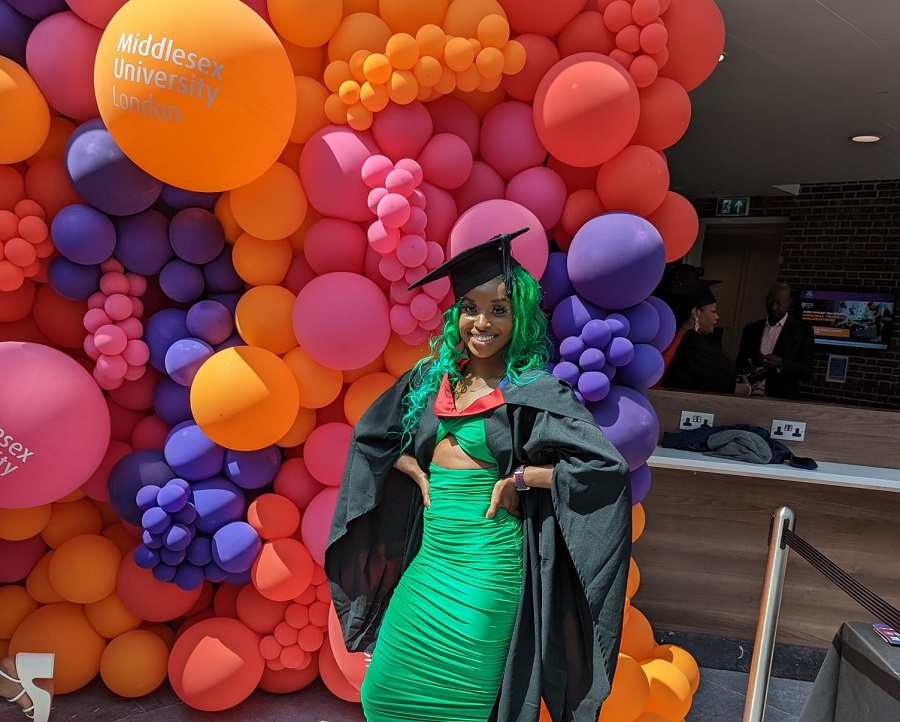 Graduate in Child Nursing Sianne Chinnoyelum Chinwuba's accolades while studying at MDX include winning Most Inspirational Student Nurse of the Year at the 2021 Student Nursing Times Awards.

At the time, Sianne said: “I am so grateful and honoured and I will forever be thankful and humble”.

She was also awarded an internal prize for Most Inspirational Student Nurse for Children and Young People.

A long list of achievements at MDX include being a Student Voice Leader for her cohort, offering one-to-one support to peers, and working as a Student Learning Assistant.

She found time to be involved in an international nursing collaboration which, because of Covid, involved working virtually online with students and lecturers from countries including China and the US.

Sianne, who now works as a paediatric staff nurse at St Mary's Paddington and is a writer and blogger, thanks “lovely staff members at MDX who were supportive and believed in me”.

Her advice to the next generation of students is: “Be authentic, as my authenticity got me where I am today.

“Put yourself out there because if you don’t ask, you don’t get. Seek opportunities and don't always sit around expecting things to happen.

“Do your very best, ask for help, create relationships and bonds. Those things will benefit you in the long run.”

In future Sianne plans to return to studying by embarking on a Master’s.

2022 Law graduate Najat Nasr is the proud winner of a place, with a full scholarship, at the prestigious College of Europe in Bruges, Belgium. She will be studying a Master's in European Legal Studies with 350 of the best students from across Europe. She would like to specialise in the internal market and Rule of Law.

Najat, a mature student, started her LLB at MDX Dubai and transferred to Hendon for her second and third year to be nearer to her Family in Germany during the pandemic.

In her second year, she won the Penny Kent prize in EU law - a subject which she says "became my passion," resonating because of her background as a third country national living in continental Europe.

She chose MDX originally on account of its global outreach and renowned European Law Team including Professor Laurent Pech and Dr Joelle Grogan.

"The lecturers are beyond expectations - I found support from the academic team that I would never have hoped for" she says, giving special mention to Joelle Grogan who she says "inculcated the love of the law" in her.

She thinks the "humanity, care and empowerment" of students offered by MDX's Law and Politics Department puts it on a par with Russell Group universities.

Returning to academic studies after 20 years away, Najat says she was "welcomed and encouraged" and that "being with younger students motivated me more, to be competitive, to excel in what I was doing. Anything was possible!"

She became a Student Learning Assistant in her third year, which gave her strength and taught her new skills. Given the chance, she says she would do the course all over again without hestitation.

At the same time as her Master's, Najat will be studying for the SQE to practice as a solicitor in England and Wales, sitting her first assessment next January and the second next April.

2022 Interior Design graduate Afreena Sakeer has won a prestigious Publications Apprenticeship with United in Design -  an organisation with a mission to address the lack of ethnic and socio-economic diversity in the interior design industry. 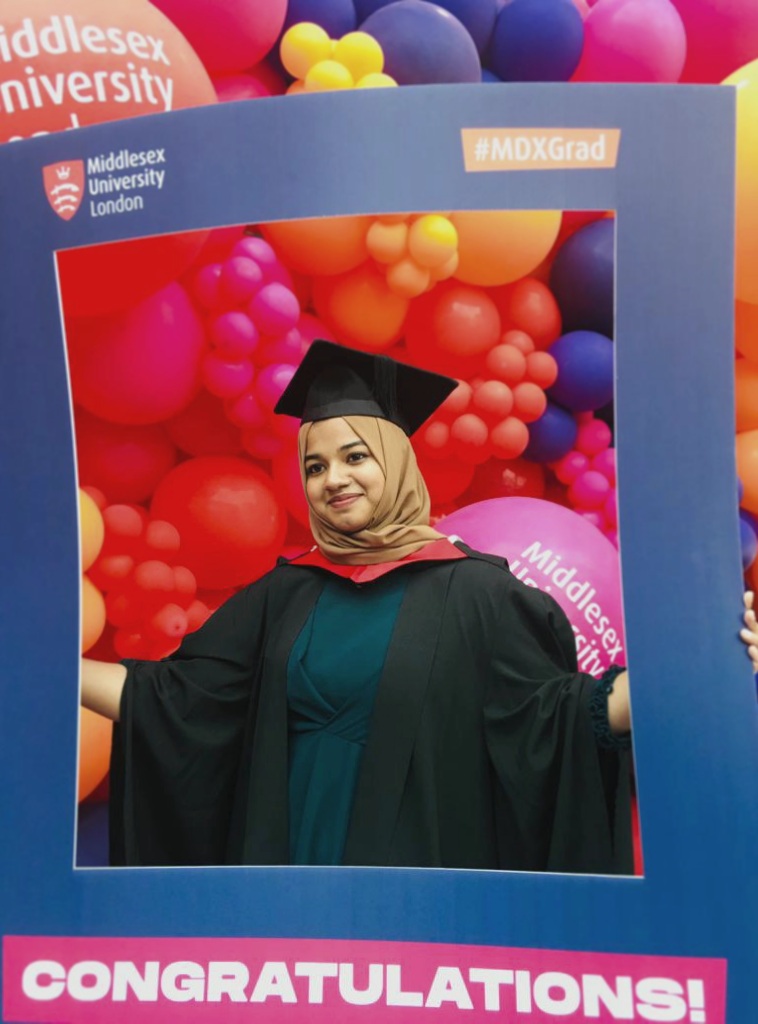 Over the next year, she is doing a series of twelve-week paid work placements on well-known interiors publications: House & Garden, Elle Décor, Homes & Garden, Living Etc and The World of Interiors. She has recently started her stint at House & Garden, which she says has been "absolutely eye-opening and amazing so far!"

Afreena says the Apprenticeship is "a fantastic opportunity," since the search for a job after graduation "can be a very nerve-wracking process without prior placement experience".

Afreena says she principally chose MDX for its outstanding studio and workshop facilities, and that she loved the university's diversity, big community of international students, the convenience of having everything located on one campus, and the profusion of clubs and societies.

A course highlight was a second year project to design a pop-up store for The Body Shop, as an entry to the National Student Awards Design Competition.

Body Shop employees came to talk to Afreena and her cohort about the brand's values and their expectations for the design, and the students were mentored by professionals at an interior design firm. "Moreover, it was asked to be done over a short period of time, which would be the case in reality," says Afreena, "so it was really cool and a new experience to have a real client brief to follow".

Afreena aspires, once she's gained enough experience working in different parts of the interior design industry, to start her own small firm. 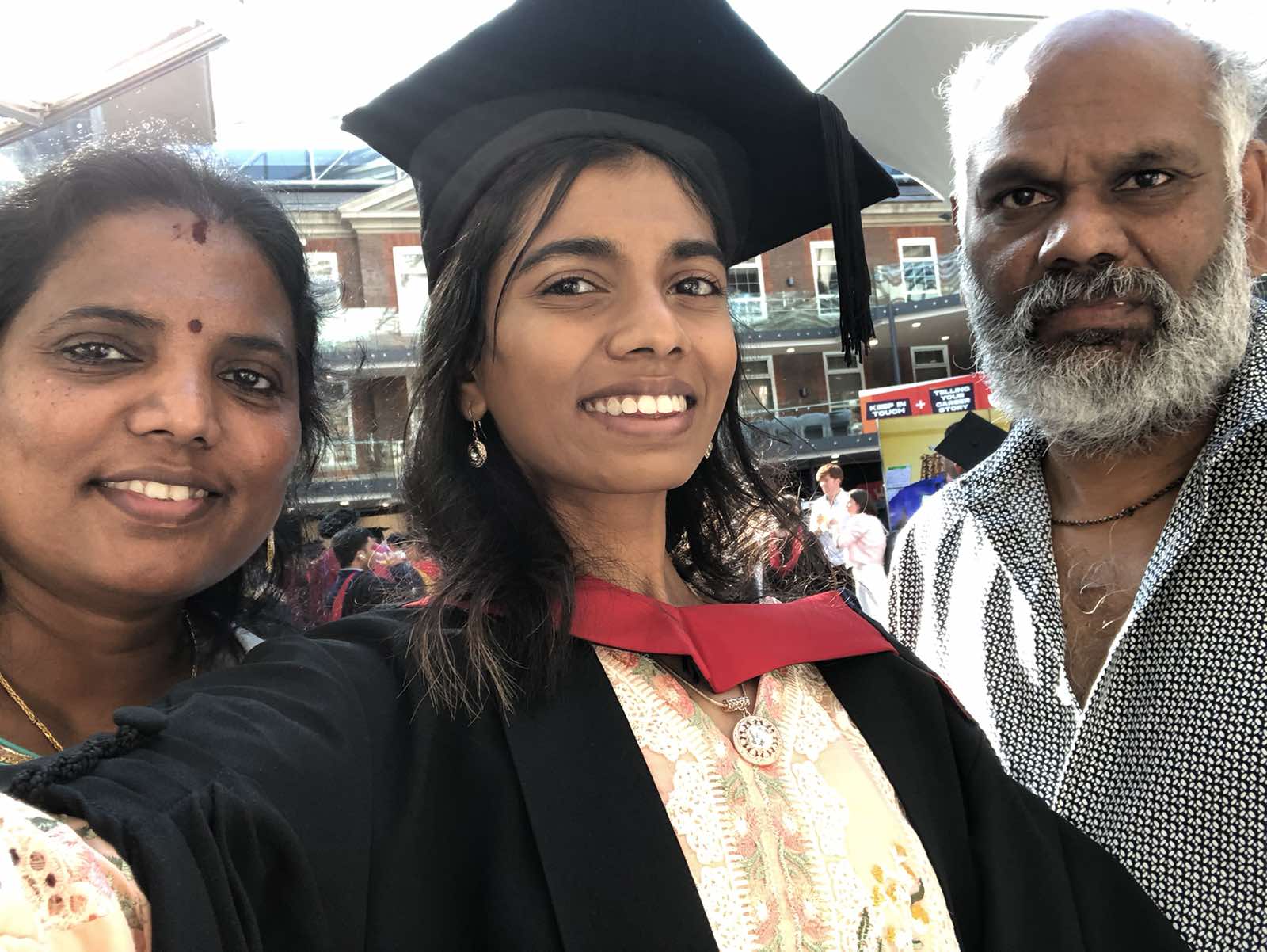 Nivothiga Balendran wants to use her experiences of eating disorders and anxiety to help others. ​

Growing up in a Sri Lankan family, Nivo often felt she had to take a traditional path with her career.

"I had really bad anxiety: even if I did well in class it never showed up in exams, I would freeze and forget a lot," Nivo says.

“The expectation was medicine but I didn’t get the grades at GCSE or A Level which made me question my worth a lot. Mental health is very taboo in our culture. Choosing neuroscience was me having my say, that was my decision". 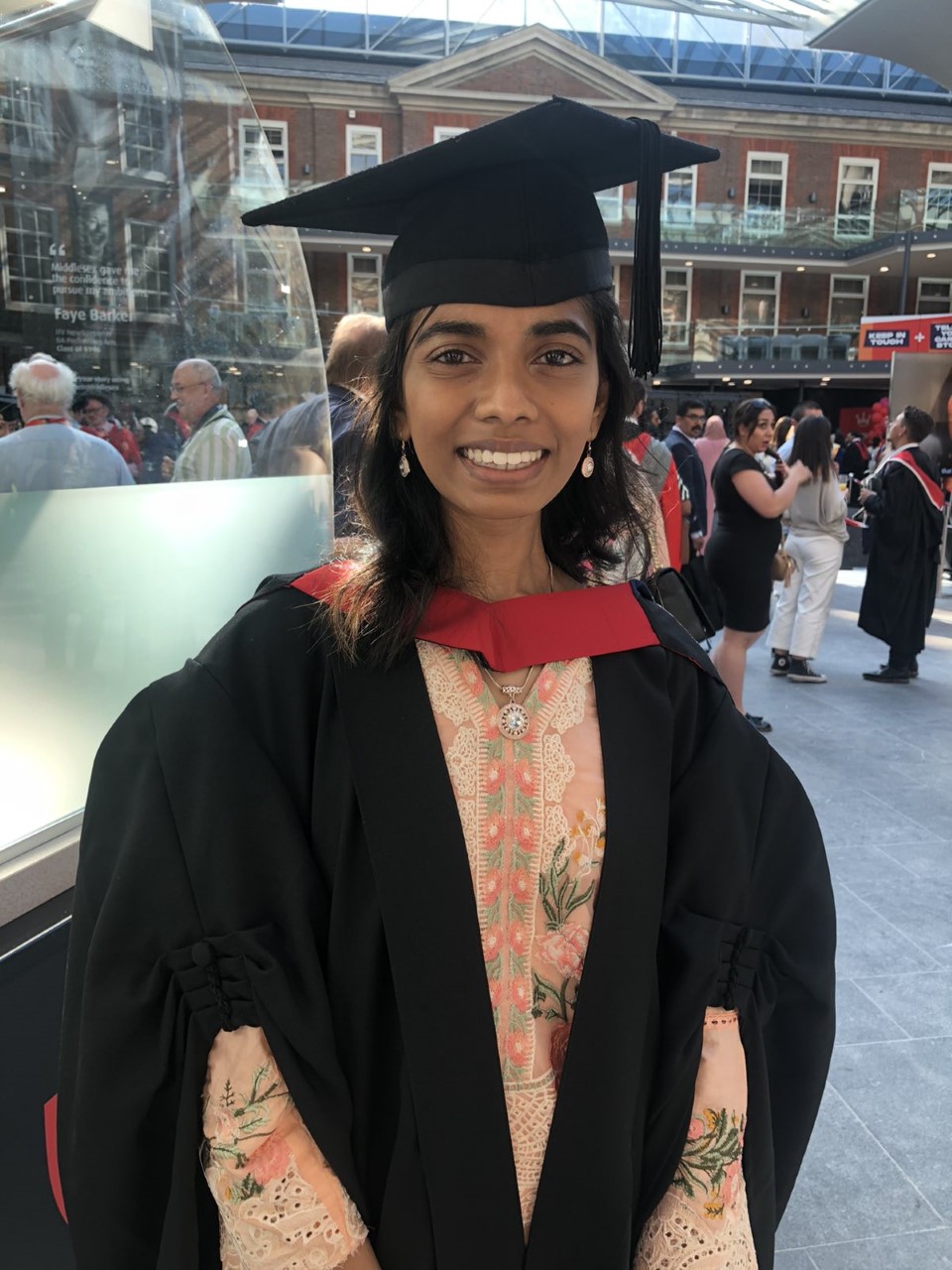 Nivo, 21, says she matured over the course of her degree as she tackled a eating disorder and overcame traumatic personal experiences. "The pandemic brought out the independent side of me," she says.

“Although studying with everything that was going on was difficult, I grew as a person and I have understood that I really like interacting with people, for example when I am conducting an electroencephalogram (EEG).

Now Nivo is embarking on a Master’s, but she aims to use neuroscience to help people with eating disorders.

“There are a lot of cognitive defects when it comes to eating disorders," she says. "Some people have higher risks due to genetics.

"Prevention is important. There are brain fog and concentration problems not helped with therapies at the moment. ​I believe a lot of cognitive symptoms are overlooked in treatment and there should be more ways of supporting people who are studying.

Nivo pays tribute to parents Jeyavathani and Balendran, wider family and the MDX community for their support. "Overall, this degree would have been impossible without my family, friends, and my lecturers," she says. "They are my superheroes and I love them all very much.“