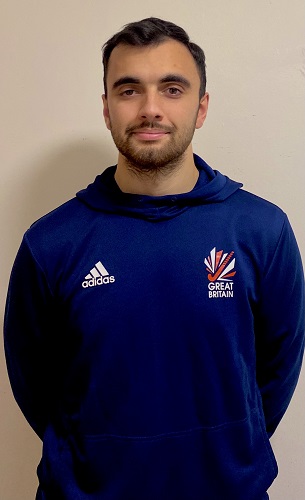 MDX Master’s student Tariq Du Lac has been analysing data throughout the Hockey World Cup which is being held in India.

The 21-year-old is undertaking a placement with GB and England Hockey as part of his MSc Sport Performance Analysis degree.

He has already been working on supporting top male and female British hockey players competing in the International League and doing prep databases in the run up to the World Cup.

Tariq said: “The analysis team came up with a new database working on all the set pieces of all the different countries teams since 2015.

“I have collected data on the different players and where they shoot at the goalkeeper to help the men with their prep. It is a lot of work but it is such an honour for me to say that I helped my nation prepare for the World Cup and hopefully the team goes really well.

“When the tournament started all the games were sent over to us so we could code them and build up a picture of the other teams should we get through to the quarter finals.

“We have to watch the other groups and do data prep in case we need them.”

Tariq, who completed a Sports Science undergraduate degree at St Mary’s, Twickenham, says he didn't think he would get in to the MDX course but decided to apply anyway.

“It was the first time I had to do an interview task which is quite cool and good experience," he said.

“When I started the hockey placement in October, coming in to a new sport was quite daunting, especially when you are working with internationals and Olympians.

“It is interesting trying to advise and answer athlete’s questions when you are trying to find out how to analyse hockey and understand the sport yourself at the same time.

“The staff at England Hockey have been so helpful which has really helped and fortunately I am a quick learner so I have picked up things quickly.

“It has been incredible so far and I am so fortunate and grateful for the opportunity to be working on something so big.”

After the World Cup Tariq will work with both the England men’s and women’s teams.

He said: “First I will be analysing data the Pro League then both teams have the Euros this year so there are two more big tournaments to work on which is amazing.

“Hockey has been a great insight into what other sports look like from a sport science world. I do not mind what sport I end up in, but working with any elite athlete and saying that you have been able to help them in some way is a privilege in itself.”

Dr Nimai Parmar, Senior Lecturer in Sport Performance Analysis at MDX said: "I am proud that we have been able to continue our partnership with GB and England Hockey to offer transformative education through this studentship with our national team.

"I am delighted that Tariq has been able to develop his skills under the guidance and direction from some of the top hockey analysts in the world at major international competitions. Our thanks to Lead Analyst Amber Luzar and her team at GB and England Hockey for championing these joint studentships."

To find out more about studying Sport Performance Analysis at MDX click here.