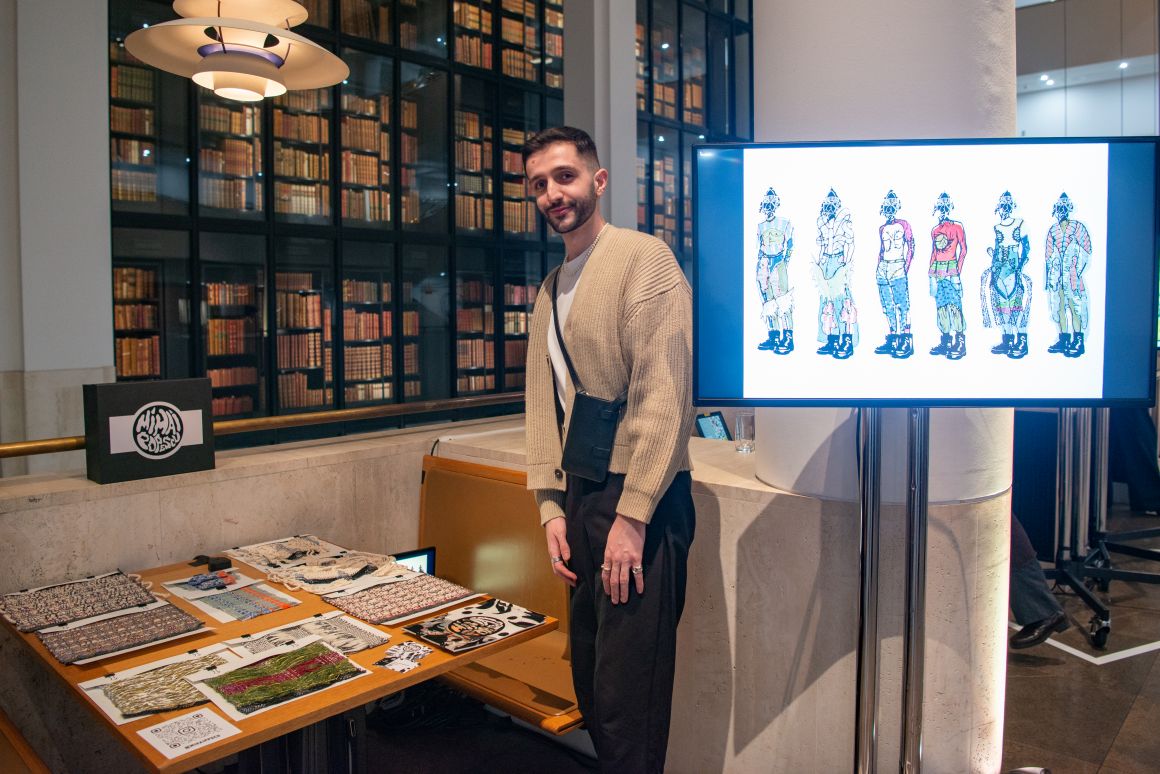 Third year MDX BA Fashion Textiles & Design student Mihai-Eugen Popescu is the winner of the 2022 Fashion Design Research competition, a collaboration between the British Fashion Council and the British Library.

The £3000 prize, given by the BFC, goes towards developing Mihai’s final year collection. The brief for the competition, inspired by British-Indian designer Supriya Lele, was to create a research-focused fashion portfolio prompted by the British Library’s collections. Entrants were invited to reflect on their personal culture, thinking how to bring it into a contemporary setting. Prizes were announced earlier this month, following presentations by the six finalists, at an event attended by British Library CEO Roly Keating and chair of the Board Dame Carol Black.

Mihai, who grew up in the town of Calimanesti in central Romania, looked at images and descriptions of Romanian traditional dress for both men and women in the Library collections. “It was eye-opening, it made me connect with my heritage a lot. It really made me understand,” he says, adding that his research findings cast his grandparents and parents in a new light for him. Peasant clothes from different periods had consistent features of style – minimal pattern-cutting with “lots of squares and rectangles [of cloth],” with elaborate embroidery around the neck and ruffles at the cuff. “They were not using luxurious materials, they had to be accessible to everyone,” Mihai says. 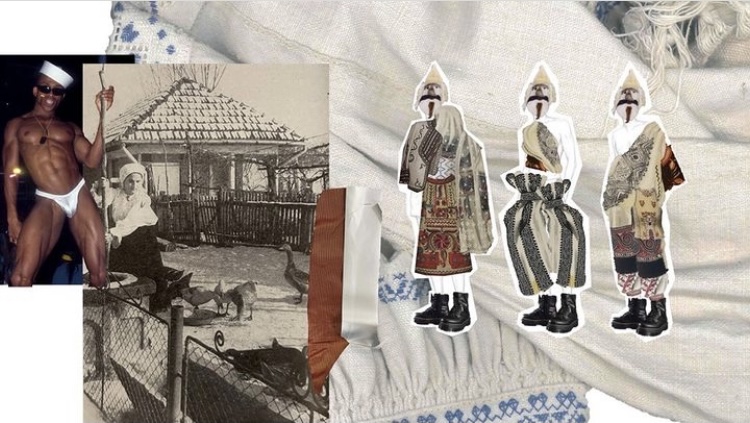 Skirts feature plenty in traditional clothing for men – raising questions, says Mihai, for political groups who want to use national dress as a weapon against LGBTQ people to demonstrate they don’t belong. For Mihai, the male skirts “related to my idea that you can wear whatever you want, whenever you want” and his project for the competition seeks to “raise awareness you can be gay, Romanian, traditional, whatever”.

“Mihai recontextualized his heritage by placing it alongside experiences from his early 20s, which included partying in the clubs of London” say the competition’s promoters. “His research encompassed Romanian textiles, Romanian embroidery, Romanian pattern cutting, folklore, fetishism, and male body… He bought stunning examples of his textile designs which were displayed as part of the evening showcase”. 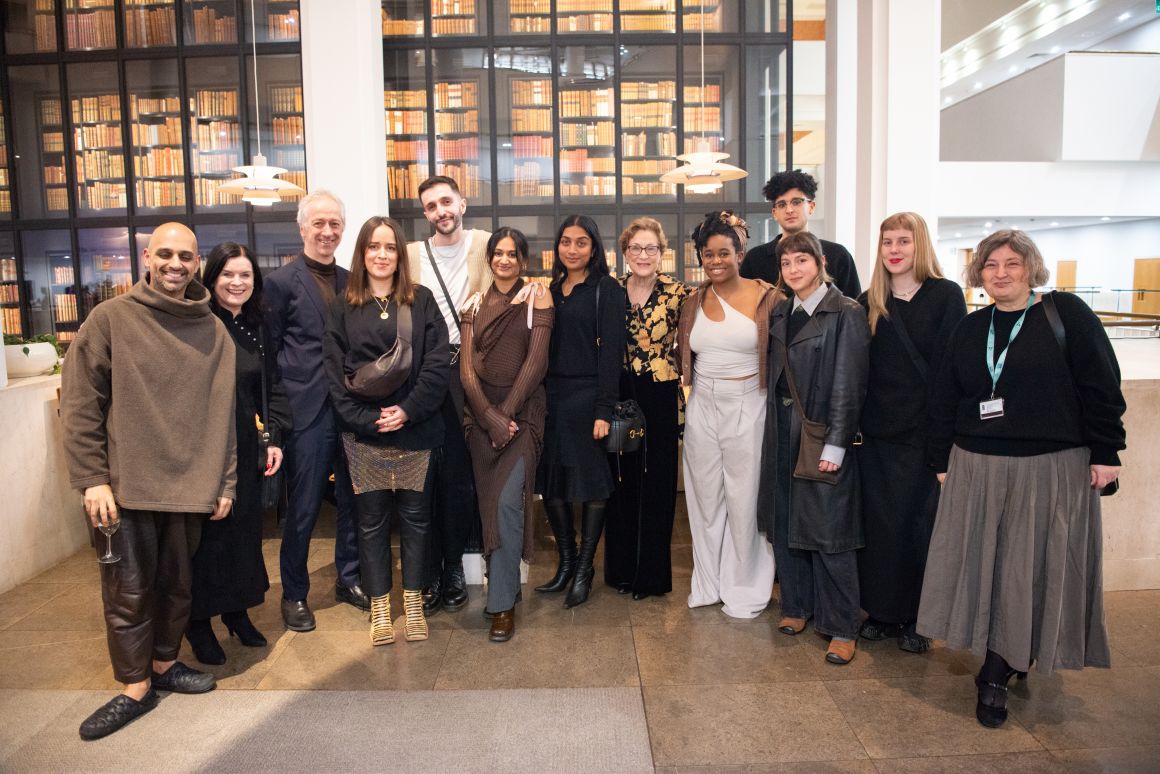 Mihai says he was always creative growing up, encouraged by his artistic mum. He chose to become a fashion designer after finishing college “because you have the power to tell a story”. He was attracted to come to MDX, where he was also did a Foundation Degree by the opportunity to study both Fashion Design and Fashion Textiles with equal weight on both as he didn’t want to have to choose between them. He also cites the wealth of art and design facilities, from laser-cutting to ceramics workshops – plus free printing, “which is great as we had to do a lot of research”.

“I feel like everyone I met here was an inspiration” he says - lecturers Michelle Wild and Jodie Ruffle and technical tutors Charlotte Hogben and Edward Houghton were “all lovely, all amazing – I don’t think I’d be here without them. I feel you get more than an education, you get a family here”. Over the course of his degree, Mihai says he has done “a lot of projects that were quite different as I was trying to find myself and my style”: one for example explored the 1989 Romanian Revolution. (Through the British Library competition he says “I found myself as a designer”). 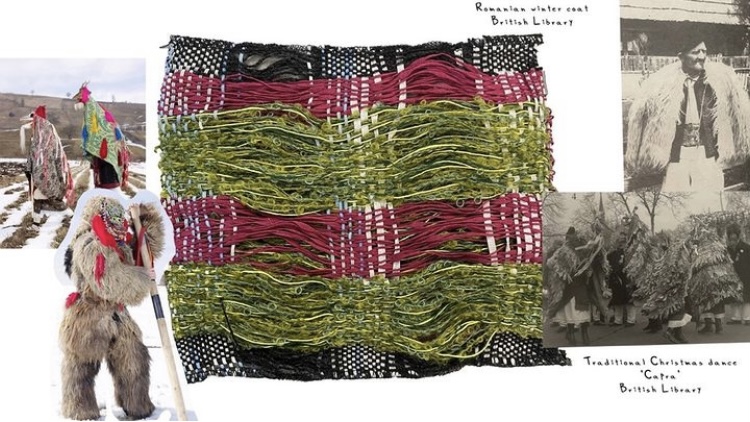 He would like to start his own brand directly after university – “I always wanted to have power to make people feel comfortable”, he says – and maybe study for a Master’s. In the future, he hopes to go into conserving traditional design and craft: perhaps becoming a weaver, in the footsteps of his great-grandmother.

“Mihai’s work delighted the judges at this year’s BFC x British Library student fashion competition” says Maja Maricevic, Head of Higher Education and Science at the British Library. “We were inspired by the way in which he used his research to deepen his creative work, while integrating a range of complex messages about heritage and identity. A worthy winner amongst especially competitive field this year”. In her acknowledgement speech Maria, who instigated the fashion research initiative, commented on the innovation and diversity of the finalists’ work, which also drew inspiration from India, the Caribbean, Honduras and Argentina.

Winner of the British Library Staff Choice was Kingston University's Rebecca Wong with a project on the magic and vibrancy the Windrush generation, including her grandparents, brought to the UK.